Poughkeepsie NY, Finding the architecture of it industrial past

The Hudson River Valley is lined with old cities. Its role as a major trade route, along the the prevalence of water power from rivers that flow down from the Catskills to the west and the Hudson Highlands and Taconics to the east, made the area as magnet for the burgeoning industries in New York. Poughkeepsie, New York, is certainly one of those old cities.

Founded in 1686, when Dutch settlers bought land from a local Native American tribe, the settlement grew, and in 1799 was incorporated as a town. Poughkeepsie served as the second capital of New York, and hosted the state convention to ratify the Constitution of the United States. During the 1800’s the city became an industrial hub, as a place where whale blubber was rendered to make oil. It was also home to paper mills, millineries and breweries. Like many places in the northeast, as the 20th century progressed, manufacturing businesses moved away, with the largest being Smith Brothers cough drop factory, which closed in 1972. Today, IBM maintains a factory in the area, but most of the jobs are in government, healthcare, and retail sales. 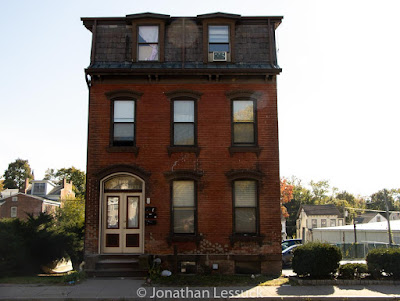 A walk around downtown Poughkeepsie is a visit back to its time of glory. Mixed with its relatively new court building, convention center and hotel are many examples of the kind of building that a center of industry would produce back in the first half of the 20th century. Let’s start our tour at the north end of Market Street, where it runs into Mansion Street. Here, you find one of the grand post offices built during the Great Depression. It was a project that FDR took personal interest in, as it was less than ten miles from his home in Hyde Park. It was designed by Eric Kibbon, in a style that emulated the flag stone buildings from the era of the Dutch settlers. It was built in 1939, and its was also given five WPA murals. 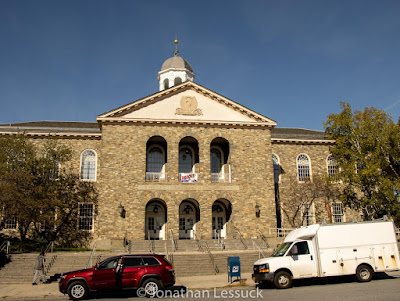 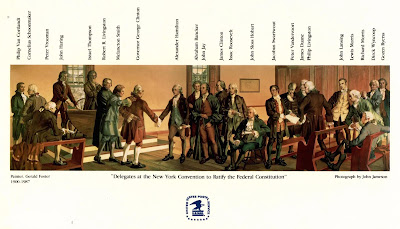 Across the street from the Post Office is the Poughkeepsie Journal Building. Built in 1941, it is still the main office for the local newspaper. 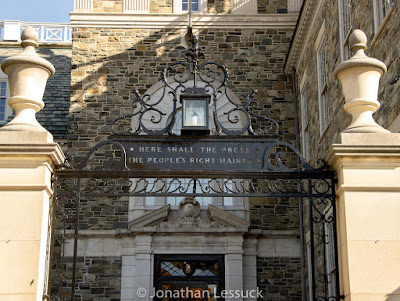 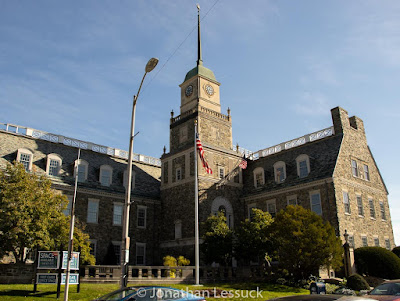 Walk a block west on Mansion Street, and turn south along Columbus Drive and you will get to the Italian Center. Built in 1928 by five local Italian-American organizations. This beautiful century-old building still operates as an event hall for hire. 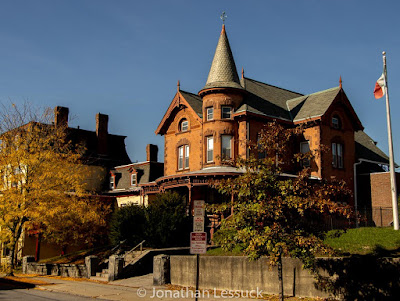 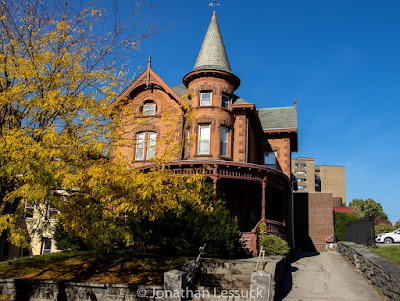 From there walk west to to Vassar Street and then two blocks south. Here is the Cunneen-Hackett Arts Center. The center provides office space, studios, galleries, and performance space for local artists. It occupies two Victorian buildings built by John Guy and Matthew Vassar, nephews of Matthew Vassar, a local industrialist and founder of Vassar College. The larger of the two buildings, 9 Vassar Street was the Vassar Home for Aged Men from 1881 through 1975. Across the street, 12 Vassar Street was the home of the Vassar Institute, which hosted societies in Science, Literature and Art, from 1882 until 1977. The city bought the buildings and with a grant from the Charlotte Cunneen Hackett Charitable Trust, renovated them for their current use. 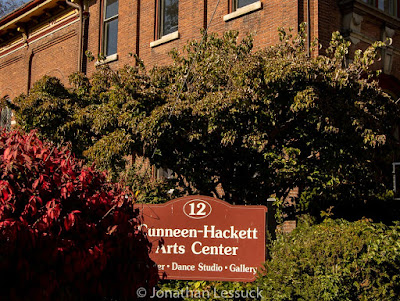 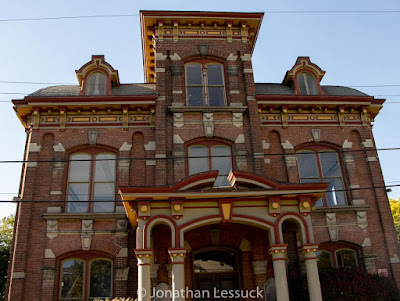 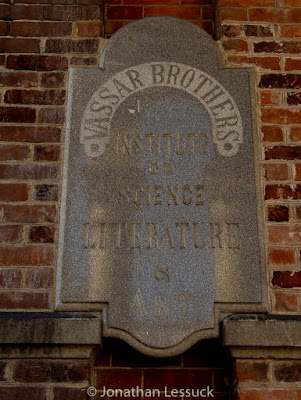 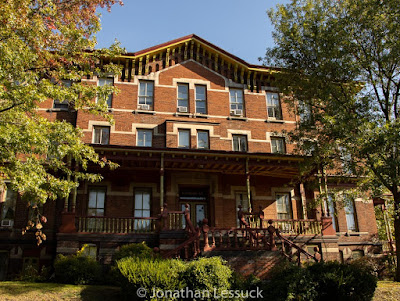 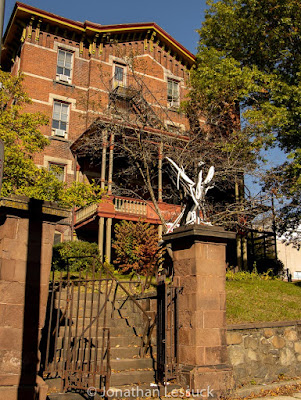 Back on Market Street is the Bardavon Opera House Theater, the oldest, continuously operating theater in New York State. It opened in 1869, and has operated as a live theater, a vaudeville house, and a movie theater. Today it is home tot he Hudson Valley Philharmonic and it hosts many live events. 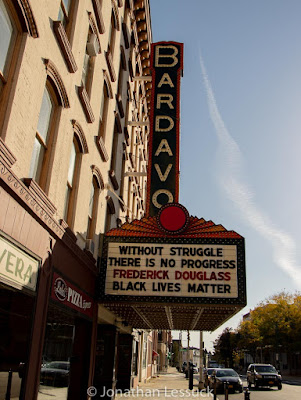 Like many old industrial cities, Poughkeepsie has definitely seen better days. But if you dig a little bit, just below a surface that looks rough, you will find some beautiful history and architecture to visit. 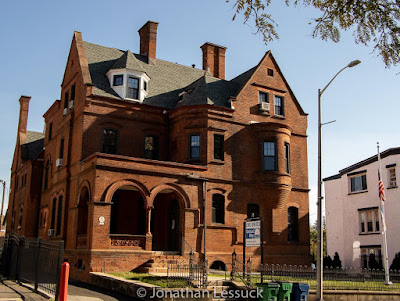 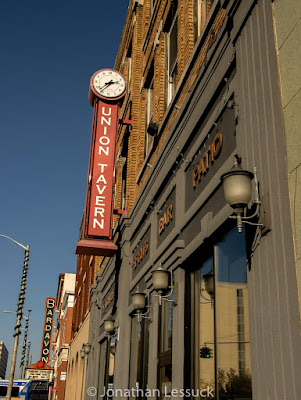 Nuts and Bolts
Poughkeepsie is seventy-one miles north of New York City. Take the Taconic Parkway to exit 47B for NY-55 west. NY-55 will take you right into downtown Poughkeepsie.

During the fall of 2020, COVID numbers in New York City have remained relatively low (so far). That has allowed for the reopening of museums and galleries, and provided them with the opportunity to bring new shows and continue shows that were scheduled back in the spring. Two really strong exhibits are currently going on, one at the Whitney Museum of American Art, and the other at the Gagosian Gallery in Chelsea.

The Gagosian Gallery is a global network of exhibition sites. Their space on West 21st Street in New York City, is currently showing From a Tropical Space, a new collection of works by Titus Kaphar. Mr. Kaphar (b. 1976) is an African-American artist who transforms classical art tropes in ways that bring the experience of of Afro-Descendants to the forefront. I first encountered Titus Kaphar’s work when I visited the National Portrait Gallery in Washington DC for his 2018 show - Unseen: Our Past in a New Light. He has also presented a TEDTalk  - “Can Art Amend History?”, which was highlighted at The Brooklyn Museum of Art.

His current show is a series of portraits of Black women and their children. However, most of the children have been physically removed from the paintings. The canvas has been cut, leaving holes where the children had been. His paintings use the physical spaces in the works to represent the actual “fear and trauma” caused by the loss of family members in American society today. His painting “Analogous Colors” was featured on the cover of Time Magazine after the murder of George Floyd.

The Whitney Museum is currently hosting a show that opened back in February 2020. VIDA AMERICANA: Mexican Muralists Remake American Art 1925-1945 is a deep dive into both the work of the muralist movement in Mexico and its effect on artists in the United States.


José Clemente Orozco, Diego Rivera and David Alfaro Siqueiros are the three most noted members of the Mexican Muralist Movement, which sprang out of the post-revolutionary era in Mexico. They were known for the quality of their works and for their progressive politics. All three spent significant amounts of time in the United States during this 1920’s and 30’s. Their paintings and murals had a great influence on the style and content of many painters as art moved from impressionism to different forms of expressionist paintings.

The show at the Whitney includes over 200 pieces. Many are by the three primary artists, including recreating Orozco’s mural “Prometheus” which is in the dining hall of Pomona College in California; Siqueiros’ “Tropical America” which was deemed too political to remain over LA’s Olivera Street and was painted over; and a recreation of Rivera’s mural at Rockefeller Center, which included portraits of Marx, Lenin and Trotsky, and which John D Rockefeller had destroyed before it was seen by the public. Also included are works by many artists from the United States. Ben Shahn, Tina Modotti and Eitarō Ishigaki are just a few of the painters included, who drew inspiration in both style and subject matter from The Muralists, using their works to promote the struggle for social justice.

I hope that the COVID numbers stay low, because these are shows that are well worth seeing, and you should get out if you have chance.

One piece struck me in particular. That was Proletarian Mother by David Alfaro Siqueiros. I have no knowledge of any connections, but I was immediately struck by its similarity to the famous photo by Dorothea Lange and to the statue Pietà by Kathë Kollwitz 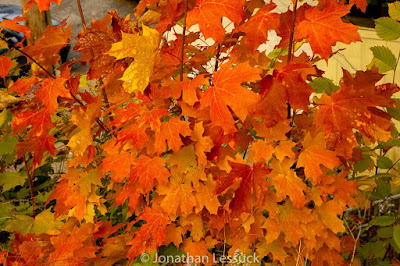 One thing that I love about living in the the northeastern part of the United States is autumn. The days start off cool, but turn really nice in the afternoon. But even better, is the process of changing leaves. While everywhere in the country goes through this beautiful time, it feels like this part of the country does it best. We have such a wide variety of trees that the hillsides explode into a burst of multiple colors. The reds, yellows, and oranges mix in with the green of the pines and firs. Here are some of the colors I found this fall in New York. 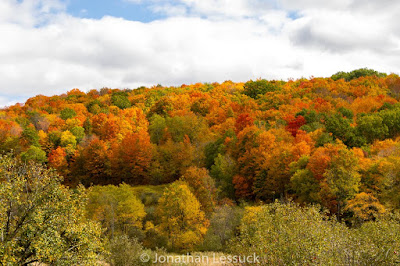 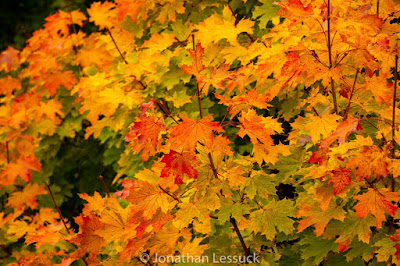