On Sept, 8 1565 a party of Spanish explorers led by Don Pedro Menedez de Aviles landed on an inlet and started a settlement. As Sept 8th is the saints day for St. Augustine, that is what they called their new town. Today St; Augustine Florida is the oldest continuously occupied European settlement in the Americas. During that time St. Augustine has been part of Spain, England, The United States and the Confederate States of America.

The center of the city today is The Plaza de la Constitución. Created in 1573, The plaza was the heart of the original settlement flanked on the west side by The Government House (built 1713)- home to Spanish colonial government and on the north side by the Cathedral Basilica de St. Augustine (built 1797).


Stretching from Plaza de la Constitución to the Old City Gates is St. George's Street. This pedestrian mall is the center of the old city. Along it are some of the oldest houses in St. Augustine. Now While the settlement dates to 1565, the houses do not. The English objected to Spain's presence in the America's and sent pirates to attack St. Augustine, and attack they did. Before the Spanish built Castille de San Marcos, British forces invaded St. Augustine several times, burning it to the ground.

Most of the houses along St George's Street date to the mid 1700's. Today they have been converted into stores and restaurants. The shops range from touristy to high end and the restaurants from pizza to fine dining.

What they have in common is that they are very fine examples of Spanish style architecture. They have main houses with courtyards. Kitchens were usually separate buildings to keep the heat and smoke away from the main building. Here are some of them: 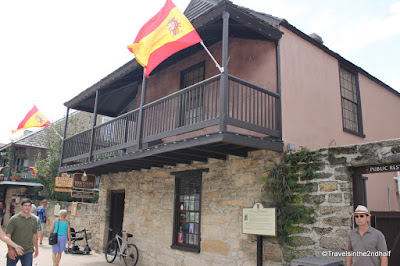 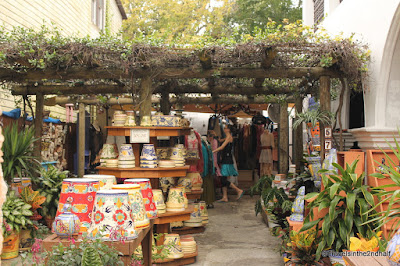 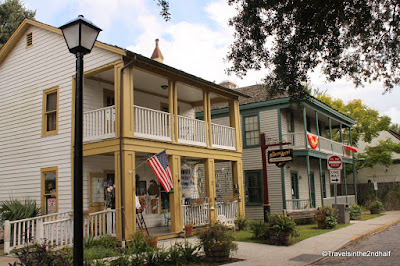 There are also two historical recreations along St, George's Street. One is the Oldest Wooden Schoolhouse in the United States. Built in the early 1700's it became a school when it's owner married and converted it. It was also the first co-ed school, taking in girls in 1788.

Nearby is the Colonial Quarter. This recreation presents a tour through history. It is divided in sections representing the significant chapters in St. Augustine History - 16th century, 17th, century, 18th century Spanish and 18th century British. Each section of the grounds has examples of buildings, businesses and social life. I strongly suggest taking the tour, my guide had a wonderful sense of humor and a trove of information. 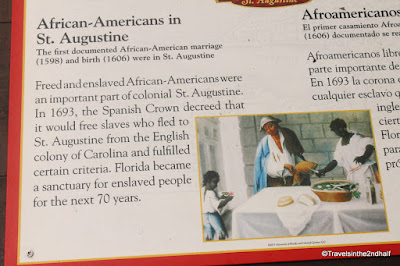 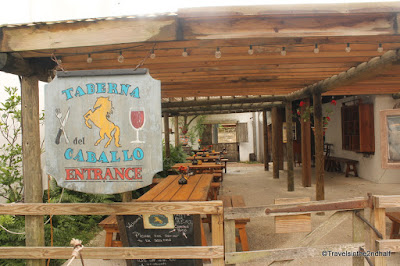 There is a lot to do and see in the Old City of St. Augustine. You can spend several days just exploring this part of town.
Posted by Jonathan L at 4:30 AM 1 comment:

Wow! This entry marks my 100th blog piece. It was almost 2 years ago when I started this blog, and I was totally unsure about how it would go and where it would take me. But here I am, and 100 pieces is a time for reflection.

I started with a piece called “Why I travel” and I intended that this blog be a way for me to share my travels with old friends in a way that was better than social media. Along the way I have learned that writing the blog has given my a voice on the history of where I travel, but also on what it like to be a traveler, especially as I enter retirement and look forward to the changes in my life that will accompany having some extra free time. I have made some new friends by sharing my thoughts and photos, and I have learned as much about myself as I have about the places I visit. I also have learned how to slow down my writing to give a better picture of what I have seen.

I have also learned to look at my city with a traveler’s eye. I try to introduce others to the neighborhoods away from mid-town and get life-long NYers to visit parts of the city they have never been to.

Most importantly this blog is a journey. It represents my growth and experiences and I have been very happy to share it with all of you.

Which gets me to my next item – HOW CAN I CELEBRATE THIS MILESTONE?

Well, since what I want is to share my thoughts, travels and photos I have a proposition. I would like to share one of my photos with one of my readers. But how to choose? Well, here is the deal – Whoever can get the most of their friends to either follow my blog or like my facebook page will receive an 8x10 framed print of the photo of their choice from my blog. Just have your friends email or leave a comment with your name after the they like or follow me.

The deadline will be Dec. 19th. I will announce the winner on Dec. 22th.

I hope that all of you have enjoyed my writing and photos. I can promise that there is a lot more to come in the next 100 posts.
Posted by Jonathan L at 7:16 PM No comments: 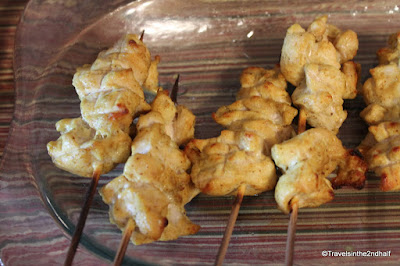 The origins of saté (or satay) is in Indonesia, Java to be exact, but its roots are in the kabobs brought from the Middle East by Muslim traders. The dish probably started as street food. Today saté can be found throughout Asia from the streets to the finest restaurants. The basics of the dish are pieces of meat that have been marinated, and then cooked on skewers, usually over coals. The meat is served with a sauce, which can be spicy, coconut based, curry based or often a combination of all three.

In The New York Cookbook, Molly O'Neill has included a wonderful recipe from Dhanit Choladda. Today Dhanit is the head chef at Thai U.S.A. in Huntington NY. He can to the United States at the age of 19 from Thailand. His recipe uses coconut milk curry and Thai fish sauce as the base of an excellent sauce and marinade that keeps the chicken moist and flavorful.

I made the dish as a welcome home lunch for The Amazing Ms. D, who was coming home after spending a week in Puerto Rico attending El Primer Congreso del Afrodecendencia en Puerto Rico. I prepared the chicken and sauce along with rice and a salad. A very nice light lunch.

The recipe in The New York Cookbook is very easy to follow. It took about 20 min to prepare the marinade and chicken, which I did 2 days ahead. Today I made the sauce, which took about 10 minutes of prep and then about 15 min to cook down. Cooking the chicken took 10 minutes of prep time to put the chicken onto the skewers and about 20 minutes, but that was because I had to cook 2 batches of skewers. if you have a large broiler or grill it will take less time.

Posted by Jonathan L at 9:22 PM No comments: 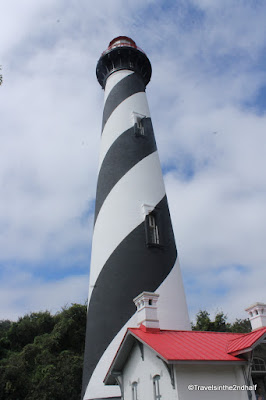 One of the highlights of a visit to St. Augustine is a trip to its iconic lighthouse. St. Augustine is the oldest continuously working port in the United States, dating back to its settlement in 1565. There has been some form of light house since that time. In the 1500's the wooden watchtower served as a beacon for sailors.

In 1824 the American Territorial government commissioned the building of first lighthouse at St. Augustine. It was a structure built from coquina stone - a strong limestone quarried in the area. Coquina is a sedimentary rock comprised of sea shells that have been cemented together over time.

The lighthouse was built very close to the beach and by 1870 was threatened by erosion. So the U.S. government again had a new lighthouse built, much further from the shoreline. This time the building was mad from brick and cast iron. Today, the St. Augustine lighthouse is the oldest brick building in the city.

The lighthouse is built on a Maritime Hammock, a large sand dune that has been over grown by plant life. The plants help stabilize the dune and have become a beautiful park to walk through.

The St. Augustine Lighthouse is surrounded by several support buildings. At its base is the oil house, where oil for the original light was stored. Across a small lawn is the Keeper's house where the lighthouse keeper and his family lived.

The Lighthouse is 169 feet tall, and you have to climb 219 steps to get to the observation platform. But once you get to the top the view is amazing. Since Florida is basically a flat state, you can see for many miles from the top of the lighthouse. 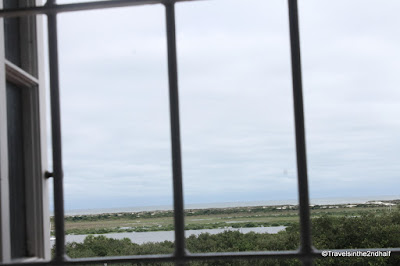 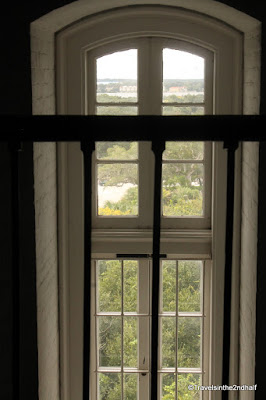 The St. Augustine Lighthouse runs a very extensive restoration program. They are building boats by hand, and working on sunken finds. Below is a cannon that has been taken from a wreck. They are using electrolysis to clean off the corrosion that has accumulated over the centuries. 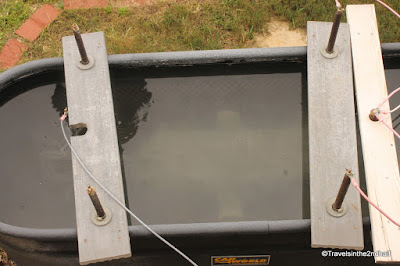 The lighthouse sits on a barrier island between the Metanzas River and the Salt Run. Take Route A1A south from downtown St. Augustine. Cross the Lion Bridge. Look for signs, the lighthouse will be on your left about 2 miles after the bridge.

Posted by Jonathan L at 6:56 AM No comments: