The Smart Museum - The Time is Now. Chicago Illinois 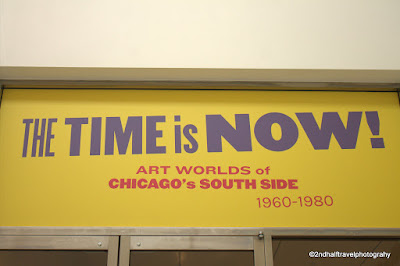 I am interrupting my visit to Hyde Park, NY, to share and excellent exhibit that happens to be in another Hyde Park – Chicago. The Amazing Ms. D and I arrived in Chicago with only a few hours to pass before our flight home. Looking for something to do, but not wanting to wade through the expanse of the Art Institute, we headed to a smaller museum – The Smart Museum, on the campus of the University of Chicago.

The Smart Museum was founded by the University of Chicago in 1967 with a gift from the Smart Family Foundation. Brothers David and Alfred Smart were the founders of several Chicago based magazines, including Esquire and Verve along with Coronet Film company. The museum now houses over 15,000 works.

What drew us to the Smart Museum was the exhibition The Time Is Now, a collection of artworks created on Chicago’s South Side during the 1960’s and 70’s. The South Side, where the University of Chicago is located, was the center of African American life in Chicago from the 1920’s through today. It was also home to a large number of students. As the political movements for Civil Rights, Black Power, Women’s Liberation and against the Viet Nam War grew, they inspired many artists in the area to create new works. At the same time several galleries open in the area that exhibited works by these artists, who were often shut of the more traditional galleries.

The Time Is Now presents several aspects of the art world on Chicago’s South Side at that time. There are pieces of “fine art,” paintings and sculptures, along with panels from murals that decorated the streets of the neighborhood. There are also political posters, and advertisements created for concerts, rallies and art shows. All together the show presents a look back at an era of political and artistic movements that has been largely forgotten.


The Time is Now is open until Dec 31. If you are in the Chicago area go down to the South Side and see it.

Getting There:
From The Loop: Take the J14 bus towards Washington/Jefferson or the 2 bus towards Cottage Grove/60th street. They will leave you on the University of Chicago campus.
Posted by Jonathan L at 8:27 AM 1 comment:

Franklin Delano Roosevelt has always one of the most interesting presidents to me. My interest may have started when my parents took us to Campobello Park, the Roosevelt’s summer home in New Brunswick, Canada, when I was ten. It certainly could be my appreciation of his reaction to the Great Depression and the creation of the New Deal programs. It certainly could be his relationship with Eleanor, the first really vocal first lady. So, a trip through Hyde Park NY gave me a chance to visit their homes and learn some more about them.

When I arrived at the Franklin D. Roosevelt Home and Presidential Library NHS I was struck by its size. I always knew that FDR was one of the richest presidents of the 20th century, but the drive up to the visitor’s center really brought that home. Today, the National Historic Site occupies a small portion of the original estate, but it is an impressive 3 sq. km (1.2 sq. miles). The land was purchased in 1867 by James Roosevelt, Franklin’s father. After passing down the long drive I arrived at the visitor’s center. It is one of the largest I have encountered that is not in a National Park. I signed up for a tour of the house, and waited for it to start. The center is named for Henry A. Wallace, Roosevelt’s VP during his third term. It houses an auditorium where there is a film that gives some of the history of FDR and the estate, a sculpture courtyard, a small cafeteria and, of course, a souvenir shop. 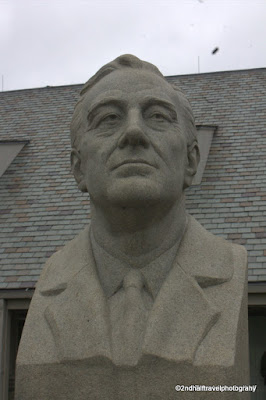 Near the visitor’s center is the FDR Presidential Library. In 1937, Roosevelt was the first president to create a research institution for his papers, and in 1940, he turned the collection over to the federal government. Today the library holds over 17 million pages of documents, 150,000 audiovisual items and 50,000 books. It is also home to two exhibition spaces. One is a permanent exhibit covering Roosevelt’s time as president, giving a historical context and exploring “Roosevelt’s relationship with the American People.” The second gallery hosts temporary exhibitions related to American culture and history during the Great Depression and the Second World War.

The walk from the visitor’s center to Springwood took me past a rose garden, and the burial site of Franklin and Eleanor. Springwood originally built in 1800 as a “farmhouse,” but it was remodeled and expanded many times over the years. It is not the imposing of the mansions built by New York’s rich elite on their Hudson Valley estates, but it is a very pretty structure.  One thing was made clear by the tour guide, Springwood was Sara Roosevelt’s house. Franklin’s mother owned the house until her death in 1941, and she ran it the way she wanted. In fact, Sara controlled the family’s finances, and doted on her son. She moved to Boston while Franklin was a student at Harvard. When Franklin and Eleanor needed a home in New York City, Sara agreed to build them one, as long as they agreed for her to live next door, and she constructed connecting doors between the two buildings. This led to a complicated relationship with her daughter-in-law. 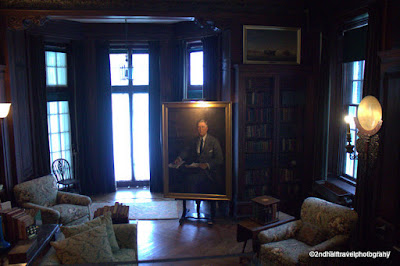 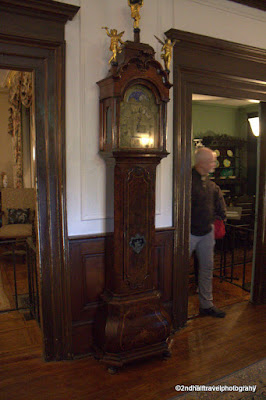 One thing that struck me is how dark the house is kept today. I know that the windows are shaded to stop damage from sunlight, but the interior lighting, especially on the first floor, is kept very low. I hope that more light was let in when Sara and Franklin lived here, because today it is almost mausoleum-like. The hose is filled with the artifacts of the lives of the Roosevelts. Paintings and sculptures fill the first floor’s entry way. This floor was the family’s public area. The dining room, living room and office along with the kitchen occupy the ground floor. Upstairs are the family and guest bedrooms. Many of the family’s things are still present. 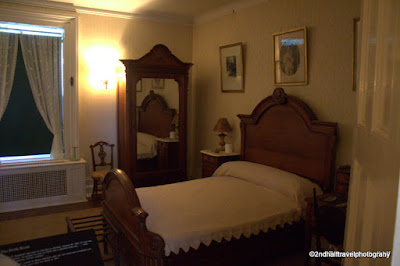 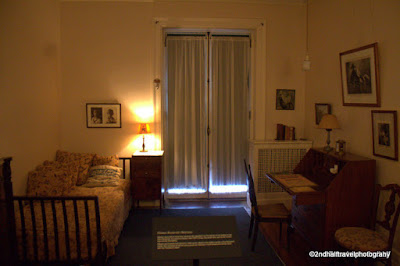 You might have noticed that I haven’t written a lot about Eleanor Roosevelt. Well, Springwood was Sara’s house, and it was not a place where Eleanor was made to feel particularly comfortable. She lived, by choice, in another part of the Roosevelt estate – Val-Kill. And that is next week’s story.
Posted by Jonathan L at 5:00 AM 1 comment: 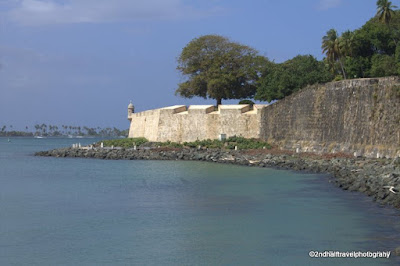 The walls of Old San Juan still surround the city to this day. Walking along the wall is a great way to see the city. Last week we toured the Paseo la Princesa to the Puerta del San Juan and on to the Cathedral of San Juan Bautista. Today we will continue to the northern side of the city. 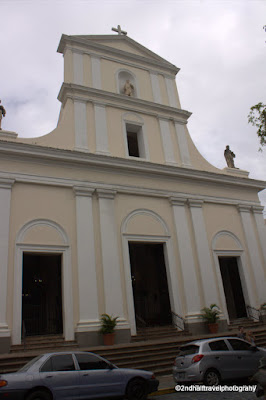 The Cathedral is at the intersection of Caleta de San Juan and Calle del Cristo. Walk north (uphill) along Calle del Cristo. You will pass Hotel El Convento. Built as a Carmelite convent in the 1650’s, today it is one of the premier boutique hotels on the island. At the top of the hill is Plaza San Jose. The Iglesia San Jose, built in 1532, is currently undergoing major renovations, but stop in to Casa de los Contrafuertes gallery. Dedicated to contemporary art work, the gallery occupies one of the old casas de la ciudad, and the chance to see good art and explore an old house are worth the price of admission. You will also find one of my favorite restaurants on the square – El Patio del Sam. This local joint on Calle San Sebastian is a great place to stop for lunch or dinner – good food, good drinks, great prices.

Turn left in front of Iglesia San Jose, and walk west to the Plaza del Quinto Cenetario. This open space was built to celebrate the 500th anniversary of Columbus’ landing on the island. At the southern end of the plaza, its highest point, is the Totem Telurico, a 12m (40 ft) tall sculpture by Jaime Suarez, built to commemorate the lives of the indigenous peoples of the Americas, especially the Tainos.  At the bottom of the plaza, the northern end, is an interactive fountain. On hot days it is filled with families using the water to cool off.

From the plaza continue west to the Curtel de Bellajá. This building was built in the 1850’s by Spain as a barracks for soldiers and their families. It continued to serve in this role after the U.S. took control of the island in 1898. From 1939 through 1955 the building housed a hospital. Today it is home to several cultural institutions, including El Museo de los Americas. You can read my blog about the museum here.

Northwest from El Curtel is El Castillo San Felipe del Morro, called “El Morro” by locals. This fort provided security, guarding the entrance to San Juan’s harbor. Today it is a U.S. National Historical Site, and you can take a self-guided tour, or look for one of the historical talks led by a park ranger. In front of the fort is a large open field. In the past, when the military controlled the fort, this space has served as a parade ground, a golf course and even had a pool for the officers and their families. Today, it is a place where Puerto Ricans come spend an afternoon, have a picnic lunch and take advantage of the winds for kite flying. Below El Morro is the Cementario Santa Maria Magdelena de Pazzis. Built just outside the city walls in 1863, this beautiful cemetery is the final resting place for many of the luminaries of Puerto Rico’s history.

When you are finished at El Morro, walk east along Calle Norzagaray, along the top of the city’s walls. On your right, you will pass some great examples of San Juan’s classic colonial architecture. The Museo de Arte y Historia de San Juan is in a 19th century building that was home to San Juan’s market. All along the street are buildings built when Spain ruled the island. These were some of the nicest, fanciest houses in the city when they were built. Now look over the wall. There is La Perla. This barrio, stuck between the wall and the Atlantic Ocean, is one of the poorest on the island. This was, until recently, a shanty town, home to the city’s slaughter houses, and former enslaved people and freed black servants, who were not allowed to live in the city.

At the eastern end of Calle Norzagaray is Castillo San Cristóbal. The second fort guarding Old San Juan, San Cristóbal played a key role in defending the city from the British invasion of 1797. From here you can walk down to Plaza Colón, and the end of our tour.

Posted by Jonathan L at 6:35 AM No comments: