Visit the Botanical Gardens In Cagaus, Puerto Rico for a taste of history and culture 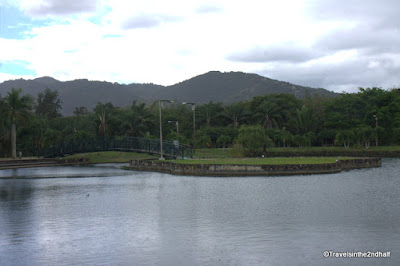 One of the best ways to see how people live in a place that you are visiting is to get out of the tourist center and visit some of the smaller towns and cities. It is one of my favorite things to do when I travel. On a recent trip to Puerto Rico I took a day and traveled twenty miles south of San Juan to Caguas.

The city of Caguas, founded in 1775, sits at the entrance of the Cordillera Central, the mountain range that crosses the entire length of Puerto Rico, as you travel south from San Juan. During the late 1700’s British and Dutch privateers raided San Juan on several occasions, and many colonialists fled to the mountains inland for protection. In 1874 Caguas was designated as a city, and its position on main road between San Juan and Ponce made it a major stop and trading point for travelers, farmers and businessmen moving goods between the north and south coasts.

The Jardin Botánico y Cultural de Caguas William Miranda Marín is a lovely place to explore the nature, culture and history of Puerto Rico. Covering about 60 acres, it opened in 2007 on the grounds of an old sugar mill. You enter through the Fuente de la Libertad, and arrive at a highly manicured area which includes the Exhibition Center, outdoor Auditorium, artisan’s shops and the Garden store. Nearby, among the ruins of the old sugar mill, is a lovely, outdoor café. Set under trees, and serving burgers, tacos and salads this could be a nice place to stop for a bite to eat, but I would suggest waiting, there is a better choice ahead.

The Garden is organized to highlight different aspects of Puerto Rican history and culture.  The Orange area is gives some of the history of the sugar business on Puerto Rico. Walk around the lake and past La Isla de la Identidad, shaped as a 3-leaf clover to represent the European, Taino and African cultural roots of Puerto Rico, and cross the bridge into the Blue area. This section is dedicated to the farmers who produced the fruit and vegetables that the island relied on. There is a grove of fruit trees and native plants, but walk up the hill to the Casa Jibara del Siglo XXI (House of the 21 Century Farmer). Here you will also find my recommendation for lunch - El Guariquitén, an outdoor café with criollo dishes cooked on a plancha over an open wood fire.

When you are done with lunch stroll across the suspension bridge (try to ignore its bounciness) to the Purple Area, which is dedicated to the Taino history of Puerto Rico. Along the river you will find rocks with native petroglyphs, and across the path and native batey. This is an open area that was set among the houses that made up the towns. It was used for ceremonial and religious activities. 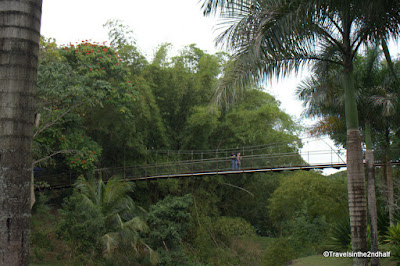 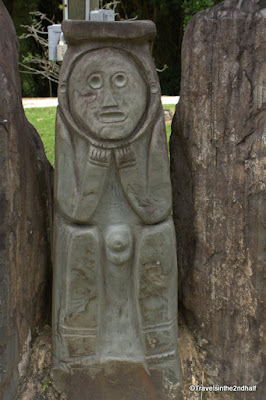 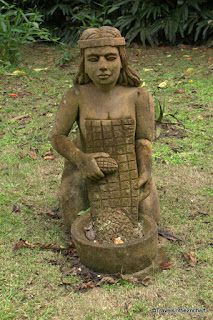 The path continues into the Yellow section, a tribute to the Africans that were enslaved by the Spanish and brought to Puerto Rico. It is also home to main reason I wanted to visit the Botanical Gardens. I have long been a fan of Samuel Lind, and Afro-Puertorican artist. He was commissioned to create a piece for this section when the Garden and I have come to see this phenomenal statue – Osain. This larger than life figure represents both spirits of the Africans brought here against their will, and the spirit of Africa itself. It is a beautiful piece that literally springs from the ground. 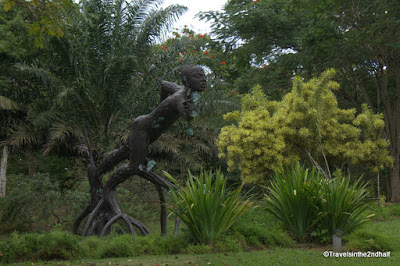 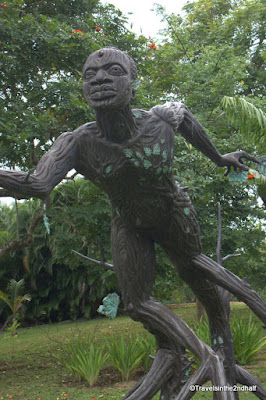 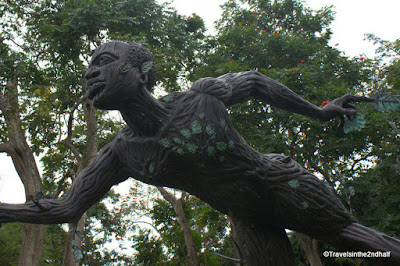 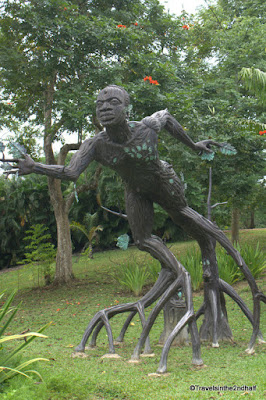 When you come to Caguas, make sure that you visit the Plaza de Recreo in the center of town. It is an excellent example of how some cities have improved and modernized their town plazas without losing the charm of the original. They have kept the old trees that provide shade to benches and walking paths, while adding modern fountains and artwork. It is a wonderful place to come and sit and people watch. 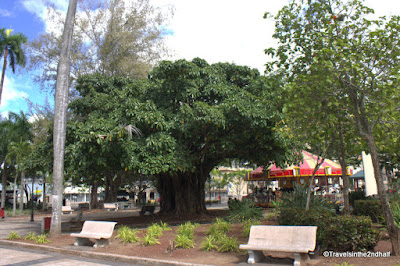 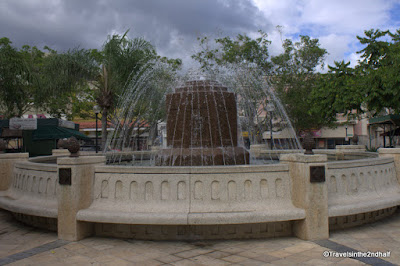 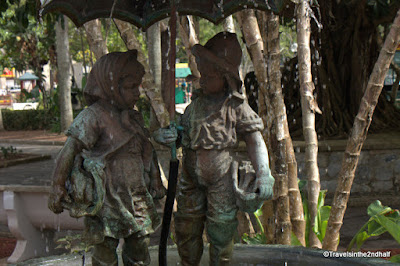 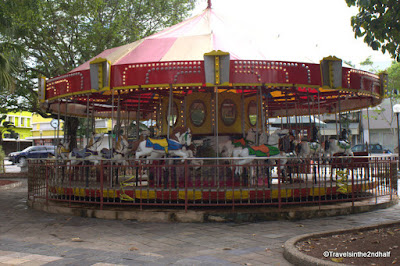 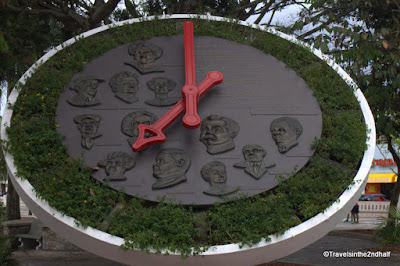 Finally, bring your day to a delicious close with a stop at Jendy’s Heladería Artisanal. This ice cream shop serves a tremendous selection of flavors. Beyond vanilla, and strawberry, you can find traditional island flavors like tamarind and ginger and many more.

There is so much more to Puerto Rico than San Juan and Ponce, so get out and explore.

Getting There:
To get to Caguas take Route 18 to route 52 south from San Juan. Exit onto route 196 west. Travel 2 Km to route 156. The entrance to the Garden is straight ahead.

Ends of the Line - Taking the Number 1 Train 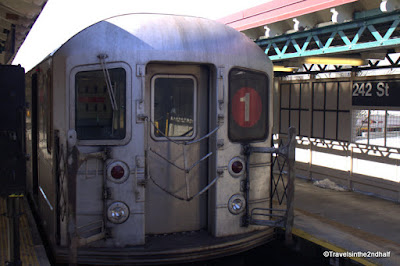 Each subway line in New York City, whether underground or elevated, has its own vibe. It comes from two factors: 1) the neighborhoods it travels through, and 2) the neighborhoods at the terminals of the train. This is the first of a series of what you will find if you go to The End of the Line.

I am starting with the Number 1 train. Not because it is the lowest number, or even because it is one of the oldest subways in New York. I start here because this is my line. I grew up on this line, and I have lived somewhere along it for almost all of my life. When I picture a subway in my head, it is always the Number 1 train I see.

The Number 1 train is part of first subway line that was built in New York. The Interborough Rapid Transit System was a private company and the operator of our first subway. Today you will hear old-timers (like me) still refer to the IRT. In 1904 it opened a line that went from City Hall up to 145th Street and Broadway. Today that line has been spilt into three sections. Part of it is the southern end of the Number 6 train, part is the shuttle between Times Square and Grand Central Terminal, and the northern part is now the center section of the Number 1 train. This is the Broadway Local which travels from South Ferry, at the southern tip of Manhattan, to 242nd Street in the Bronx, traveling under or over Broadway for most of its journey. It starts in the financial district and, after passing through some of the cultural centers of the city, works its way through several middle and working class neighborhoods to Kingsbridge, in the Bronx. 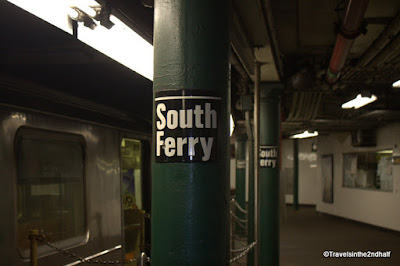 On the south end of the line, South Ferry is a place that is well known to visitors and New Yorkers alike. It is the station you use to visit The Statue of Liberty, Ellis Island, or Battery Park. You can spend time walking through Battery Park. See my blog about Battery Park here and about the Statue of Liberty and Ellis Island here, or take a ferry to Governor’s Island. Built originally as a fort to guard the harbor, and then acting a Coast Guard base, today it is owned by the city and includes parks, art exhibits and concert space.

My favorite thing to do at the southern end of the Number 1 train is to take a trip on the Staten Island Ferry. To me, this FREE ride offers the best views of the lower Manhattan skyline and the Statue of Liberty. Oh, did I mention it is FREE? Once you have crossed the Upper Harbor you have to disembark. You can either get right back on to return, or you can spend some time exploring the St. George neighborhood of Staten Island. One of my favorite times to take this trip is a sunset. The sun goes down over the harbor and the buildings of lower Manhattan light up. It is almost magical. 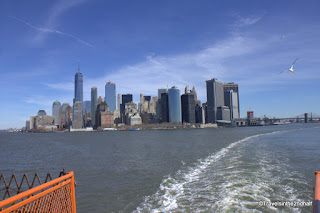 When you return to Manhattan, take the Number 1 train north for about an hour. It ends at the Kingsbridge section of The Bronx. Kingsbridge gets its name from a toll bridge that crossed the old Spuyten Duyvil Creek, built in 1693, that connected the northern tip of Manhattan to The Bronx. Today this stretch of Broadway is a growing commercial center for the western Bronx. This area was often my destination.

I would come to Kingsbridge for two main reasons. One was the Riverdale Skating Rink. While it is no longer there, this ice skating rink was a favorite destination. This indoor rink was a popular place, and a real neighborhood hangout. Let the tourists and rich go to Rockefeller Center or Wolman Rick in Central Park, we came here. I took figure skating classes, and my brother played in its youth hockey league. We would come up on weekends and spend an afternoon staying from one free skate session to another. Unfortunately The Riverdale Rink is now gone. It has been torn down and now a Self-Storage warehouse is now in its place.

Today the stretch along Broadway in Kingsbridge is the main shopping area for the western Bronx. With a Target at one end and a BJ’s a mile away at the other, Broadway is filled with Bronxites all day long. It is a place to come to shop and eat. On 231st street is Loesser’s Deli, the last old fashioned Kosher Jewish Deli in the Bronx. On Broadway, just north of 231st street is the El Malecon, home to excellent Dominican food. If you are looking for a place to buy fresh fruit and veggies there is Garden Gourmet, an excellent market that also has a great prepared food section. This wide range of stores attract a true cross section of the Bronx, Dominican, Indian, Jewish, and from many West African countries, Kingsbridge is truly an international cross roads. 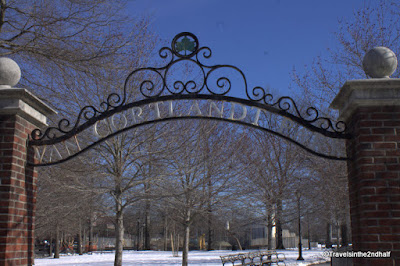 Another reason to come to this end of the line is Van Cortland Park. These 1100 acres (third largest park in NYC) include a public swimming pool, a multiuse stadium, several playgrounds and two 9-hole golf courses, one of them is the oldest public golf course in the country. Weekends find West Indian families watching cricket players in their whites, Central American and African families around the soccer fields and Puerto Rican and Dominican families at the baseball fields. All joining together to enjoy the park. During and after the games everyone gathers just south of the Parade Grounds, where there is space for picnics and cook-outs. The smell of lechón mixes with the aroma of curry goat. During the summer the line to get into the pool stretches down the block, and the NY Philharmonic and Metropolitan Opera perform concerts, complete with fireworks. But don’t wait or summer. Van Cortland hosts events all year long. You can find its schedule here.

The heart of Van Cortland Park is the Parade Ground and its Cross-Country race course. The Parade Ground is home to soccer, baseballs and cricket fields. On its edge is a 1.5 mile running track. The Parade Ground is also the Start/Finish area for one of the country’s best and most famous 3.1 mile cross-country courses. The course is challenging because it has a long flat section at the start and finish with hills that climb 160 feet. For over 100 years the best runners in the Northeast have tested themselves against the Van Cortland Park course.


The Number 1 train travels the length of Manhattan and into the Bronx. It connects New Yorkers of many backgrounds and helps bring them into the heart of the city. I invite you to take the Number 1 train, uptown or downtown, and explore someplace new.
Posted by Jonathan L at 4:30 AM 1 comment: