I have been sick this week, so instead of writing out a long piece I am going to share some photos. I have found out where all of the original VW Beetles have gone to retire - Mérida Mexico. Walking around town I saw Beetles almost everywhere I looked. Here are some of the ones I was able to get photos of: 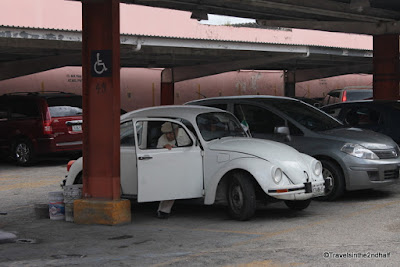 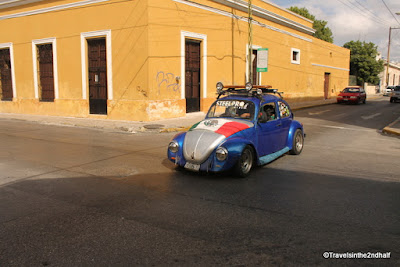 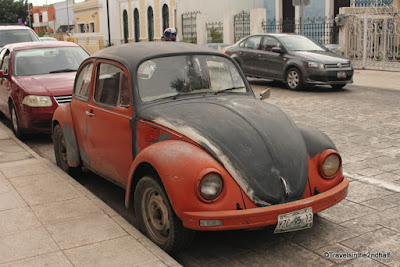 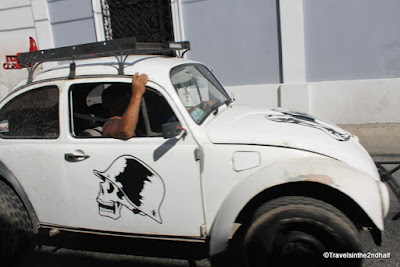 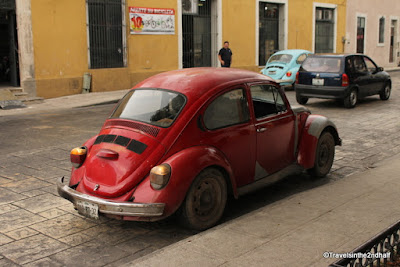 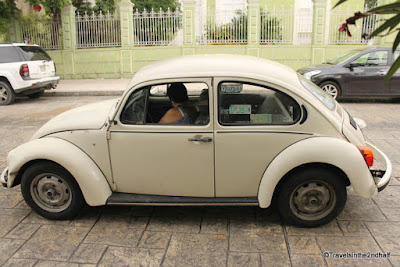 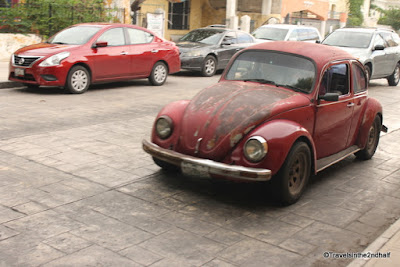 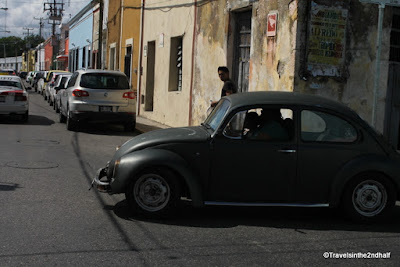 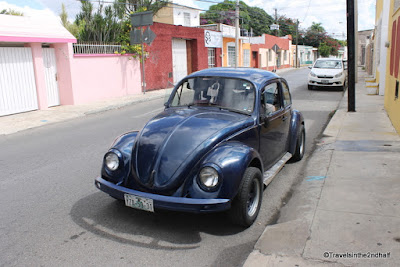 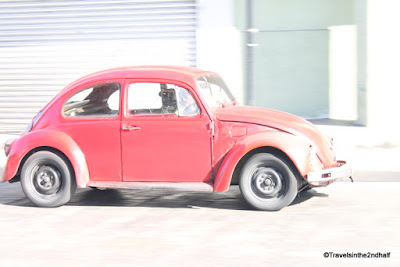 
One of the things that I like about getting off of the interstate is that I stumble across pleasant surprises when I drive along state highways. For example, when I visiting the town Oneonta NY in September, I took a drive along NY Route 23 east from town I noticed a sign for the “Hanford Mills Historic Site.” Having a couple of hours to pass and a very willing passenger, I turned off of NY-23 and into the past.

Two-and-a-half miles along the Meridale-Davenport Center Road (County Road 10) is the Hanford Mills Museum. This lumber and grist mill is over 150 years old. It has been fully restored, and today it functions as both museum and working lumber mill providing specially made lumber and finished pieces. It is a working museum, using the water power that put in place over 100 years ago.

The original sawmill was built in 1846, and in 1860 it was bought by Daniel J. Hanford. At that time it was a water powered mill, using the nearby Kortright Creek for power. The mill draws water into a millpond that sits about 4-5 feet above the height of bottom of the creek as it flows downhill. This height difference is used to power a water wheel that sits in the basement of the mill house. The turning of this wheel powers the all of the equipment through a series of belts and wheels.

The mill became truly profitable when the Ulster and Delaware Railroad passed through the property. The railroad went from Kingston NY on the Hudson River to Oneonta, passing through the heart of the Catskill Mountains. The rail line served a support to both the growing tourist industry and as a way to ship food and goods to the rest of the country via shipping on the Hudson River. The U&DRR passed right through the Hanford Mill’s property. This gave the Hanford family an easy way to grow their business.

In 1895 the Hanford family added a large furnace and steam engine. This allowed the mill to operate year round. Regardless of the whether the pond of frozen in the winter or low during a dry summer, the furnace powered the mill. In the early 1900’s the mill began producing milk crates, and added grind stones in order to begin preparing animal feed from oats, wheat and corn. Later in the 20th century a gasoline motor was added to the mill. The Mill also became the town’s first provider of electricity. 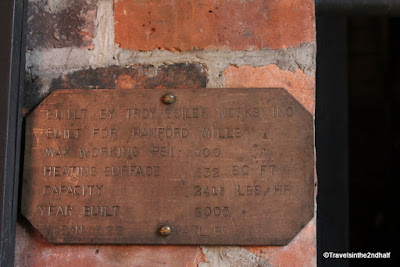 The Hanford Mills operated until 1967. It closed, but reopened that year as a museum. Today it is chartered by NY State and is open from May 15 through Oct 15th. It offers guided tours of the facility along with special event days. One of those is the museum’s Ice Harvest Day which is held on the first Saturday in February – 2/4/17 next year. Blocks of ice will harvested from the millpond and stored until July 4th when they will be used to make ice cream during the Independence Day Festival. 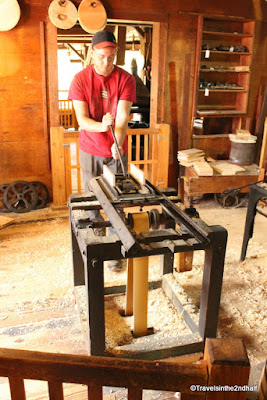 Drive up to Catskills. Enjoy some beautiful scenery and visit some historic sights. Get off of that interstate and watch for those signs that show where to stop.

Getting There – From Oneonta, NY – take NY-23 east from town for 8.5 miles. Turn right onto Meridale-Davenport Center Road (county road 10). Travel 2.5 miles, then turn left onto Doonans Corners-E. Meridith Road (county road 12). The museum will be on the left.

Posted by Jonathan L at 4:30 AM No comments:


One of my favorite parts of New York City to walk around in is Brooklyn Heights. This is one of the oldest parts of Brooklyn and it sits just across the East River from the southern tip of Manhattan. I really like walking past the old brownstones looking at the shops and cafes, but my favorite part of “The Heights” is walking along The Brooklyn Promenade.

Brooklyn Heights was developed in the early 1810’s when Robert Fulton opened ferry service between New York City and Brooklyn, then a separate city. By the 1820’s it had become New York’s first commuter suburb, home to many businessmen who crossed the river to work, while maintaining homes in the clean air of Brooklyn. The speed of this development was increased in 1822 when New York was hit with a Yellow Fever epidemic that never crossed the river.

By 1860, there were over 600 houses in Brooklyn Heights, and with opening of the Brooklyn Bridge in 1883 it quickly became fully developed. By 1890, it was the commercial and financial center of Brooklyn. Brooklyn Heights has been, from the very beginning, the home to the old money upper class of Brooklyn. It was also home to the abolitionist movement during the 1850’s.

Brooklyn Heights was the first neighborhood in New York City to be protected by the 1965 Landmarks Preservation Law. The architecture of the area is mainly row houses of 3 to 4 stories. Because they were built during a 50 year period, the styles vary from Federal to Neo-classical, mostly with Jersey Freestone, what is called NYC Brownstone. The fact that these are smaller buildings, but with varied styles makes Brooklyn Heights a great place to walk around. There is a lot to see for those who are interested. 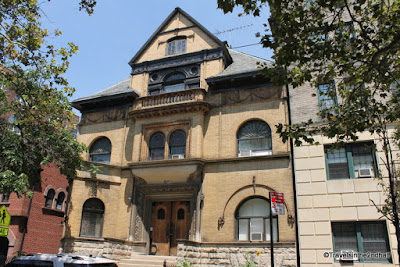 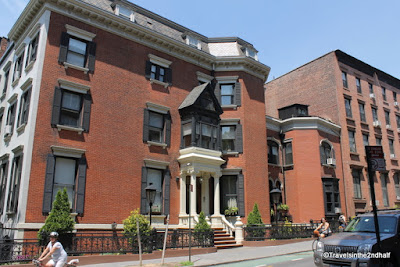 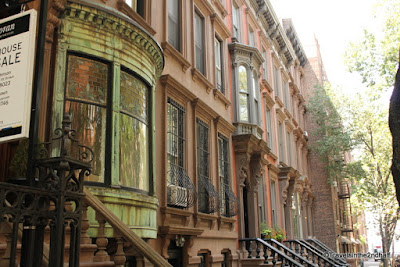 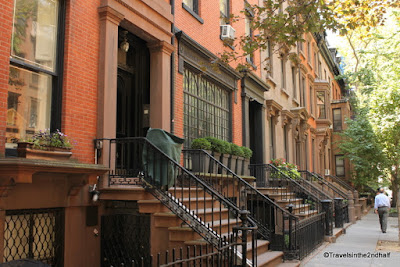 As something of a foodie, Montague Street which stretches from Columbus Park, near Brooklyn Borough Hall across Court Street north to the water, is one of my favorite streets. It is a diner’s paradise. I stopped counting listings when I got to 25 restaurants. There is something for every taste and budget. If you prefer familiar fast food restaurants, Subway’s and Chipotle’s and Five Guys Burgers offer inexpensive eating options, along with several pizza shops. Two of my favorite places are Gallitos for Mexican food and Vegetarian Ginger for Asian Fusion. Both of these restaurants are reasonably priced and serve delicious food.

The most beautiful place in Brooklyn Heights, in my opinion, is The Promenade. With some of the best views of lower Manhattan, I love to walk along or just sit enjoying the view. The hum of the BQE below the walkway becomes almost meditative. The tourist helicopters taking off and landing from the Wall Street heliport have the regular pattern of bees entering and leaving a hive. The ferries cross the water between Brooklyn, Manhattan, Governor’s and Staten Islands, looking like pond skaters, skittering across the river and bay, going back and forth looking for something, but never quite finding it. When I was little my parents used to take us to the Promenade, often for an evening walk to watch the sun set over the buildings of lower Manhattan, followed by getting some ice cream at one of the desert shops along Montague Street. 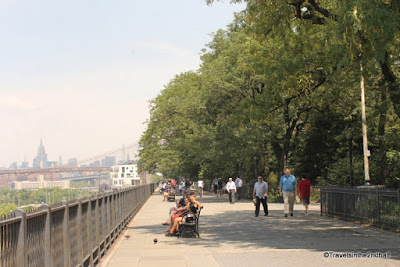 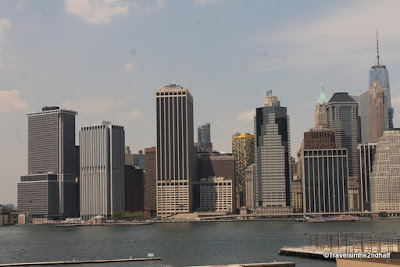 So visit Brooklyn Heights. It is full of history, interesting houses, good food and beautiful views. It is a great place to spend an afternoon.

Getting There:
Subway – Take to 2,3 trains to Clark Street; the 2,3,4,5 trains to Borough Hall, the A,C,F train to Jay Street/Metrotech or the R train to Court St.