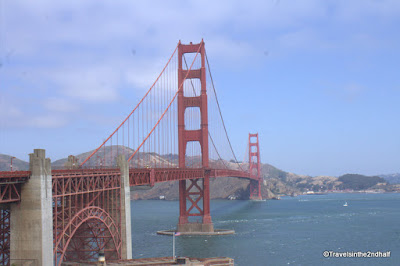 If you have been reading my blog for a while, you should know that my engineering background makes “big things” must see for me. So on a recent trip to San Francisco I took advantage of the time to visit the Golden Gate Bridge on more than one occasion.

One of the most iconic structures in the United States, the Golden Gate Bridge opened in 1937, connecting San Francisco with Marin County, to the north. The Golden Gate is the name of the straight that connects the San Francisco Bay with the Pacific Ocean. The bridge is 1.7 miles long and its roadway is 220 feet above the mean high water mark.

One problem with sight-seeing in San Francisco is unpredictable weather. The cold water of the Pacific Ocean is a fog generator, and every morning that we were in town started as a cloudy, foggy day. So one morning I headed to the bridge with the hope that the skies would clear. Unfortunately they didn’t. The clouds remained in place. When I arrived I could barely see the bridge from the overlook next to the highway. Like many people that day, I walked out far enough to take some photos, then it was back to my car to head for warmer climes. 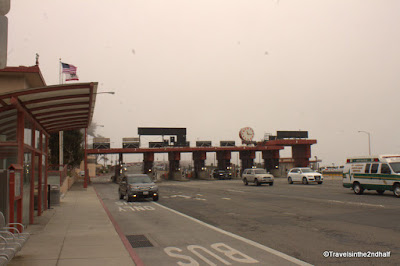 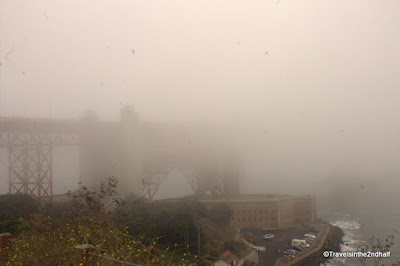 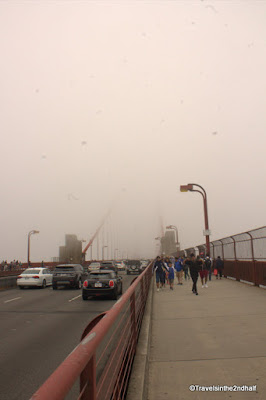 A couple of days later I returned. This time it was a beautiful, sunny day. The Golden Gate Bridge loomed over the bay. The support towers rise 760 feet above the water, 540 feet above the roadway, and its “international orange” color stood out against the blue skies. In my opinion, the Golden Gate Bridge is one of the most beautiful man-made structures, and it fits in with its natural surroundings. It is perfectly designed for its placement. 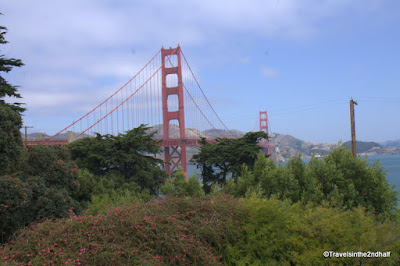 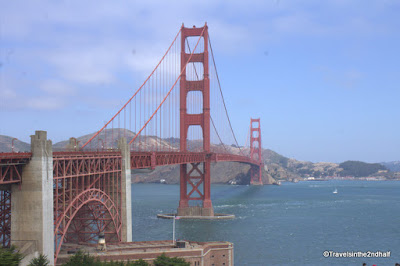 When you visit, your first stop on the San Francisco side should be the visitor’s center. It sits in a plaza with a small parking lot (see below for other parking options), a snack bar and a café. There are several historical and scientific displays about the bridge. From the visitor’s center, was up to the overlook. From here you have a great view of the bridge and the Golden Gate.

The walkways on the bridge can get crowded on a nice day, especially if only one walkway is open. There are hundreds of pedestrians, along with a large number of bicyclists, so keep your eyes open. 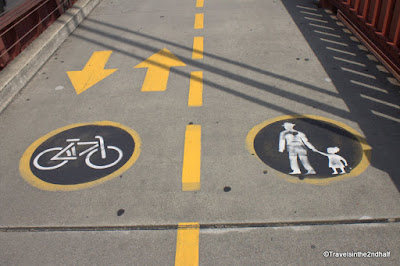 Walking along the bridge is a unique experience. First, it is windy. Even on a calm day the temperature difference between the cool ocean air and warm air over inland California create a near constant breeze. Second, it is high. 220 feet above the mean high water mark. This height gives a wonderful view of Alcatraz, San Francisco and the bay. It is the view that makes the walk worth the effort. The Golden Gate and San Francisco Bay are beautiful. The view from the bridge is one of a kind. 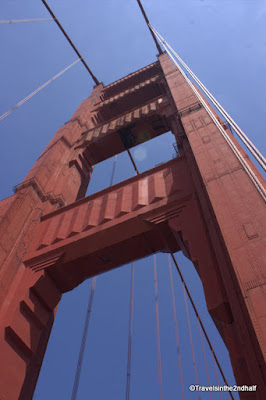 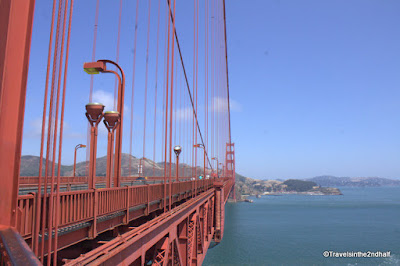 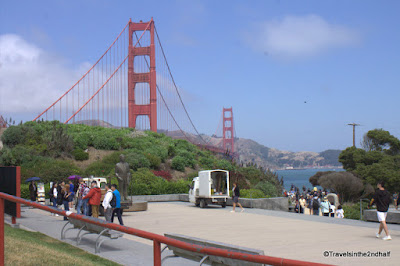 Getting There – The Bridge sits at the northwestern corner of the San Francisco peninsula. It is completely surrounded by The Presidio, the decommissioned military base. There are multiple bus lines from the center of the city to the bridge toll plaza. I would highly recommend parking at the main lot in the Presidio, near the Presidio Welcome Center.  You can park all day there for $8.50 and take a free shuttle to the bridge, and to other places around the Presidio. This also gives access to several, hiking and bicycle trails, restaurants, and other activities.

One thing to know about watching an eclipse in a large public place, there is a lot of sitting and waiting. I arrived at the Athens’s Tennessee Regional Park early – at 10 AM. So I that meant I had a three hour wait until the start of the eclipse and a 4.5 hour wait until the start of the total eclipse. So I found a seat in the shade. This gave me the opportunity to meet and talk to a lot of people around me. 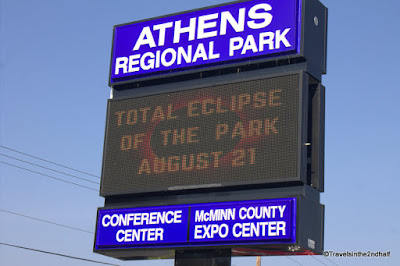 This is not the first solar eclipse that I have seen. I distinctly remember the 1979 eclipse. In New York City. It was a partial eclipse. The strongest memory I have is that the leaves of the trees diffracted the light and there were dozens of images of the sun on the sidewalk.

This was the first time that I have been close enough to a total eclipse that I could travel to see it. So I drove over seven hundred miles from New York City to Knoxville TN. I picked Knoxville because it was the closest city to New York that was near the path of totality. Being near a bigger city gave me many hotel options, even though I waited until June to make reservations, and also the ability to choose where I wanted to observe the eclipse. I looked for a place that was not going to be too crowded, and that had facilities and food available. Athens met those criteria perfectly. The park is fairly large, and the several thousand people that came were pretty spread out, seeking shade on a hot summer’s day.

So what do you do for three hours while waiting for an eclipse? You talk to your neighbors. 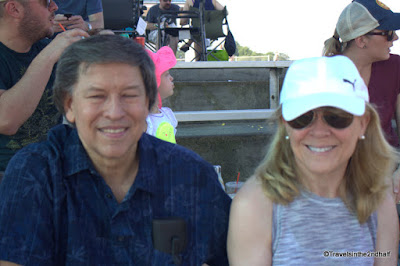 Joe and Uta drove down from Connecticut to see the eclipse. Joe is an astronomer. In 1979 he was working at the Mt. Talcott Science Center where he helped host and teach several hundred students during the last eclipse over the U.S. 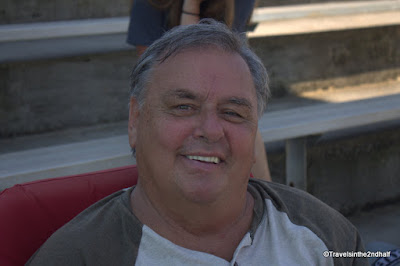 Bob timed his trip home from Michigan in order to catch the eclipse. While it was a last minute decision, he found a nearby camp site, and came to the park to enjoy the eclipse with other people.

Sakina, Mustafa and Arwa (FL)
Sakina and her husband were brought to Athens by their children, Mustafa and Arwa. These college students were motivated by their friends and classes. Mustafa is a member of the Astrophysics club at UF and Arwa was taking an astronomy class. They all felt that seeing the total eclipse was a once in a lifetime event that they didn’t want to miss. 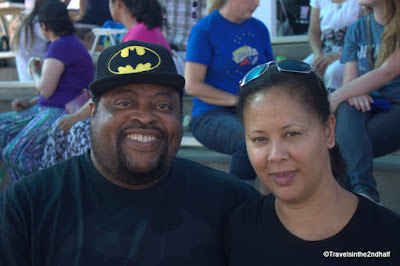 Self-described geeks, Reginald and Denene have been planning this trip for over a year. “The path of totality was just too close to miss.” They have a personal tie to Athens. Returning home from their wedding in 2005, an emergency forced then to stop in Athens. While they were sleeping in their hotel, a tornado crossed the highway to the south, almost exactly where they would have been if they had not stopped, so Athens has a special place in their hearts. 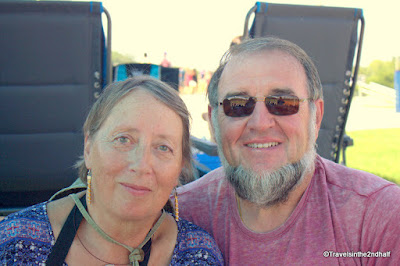 Philippe developed a passion for astronomy while working in Longmont Colorado. For the first time, Philippe lived in an area that did not have light or air pollution, and the night sky opened up to him. There he joined the local chapter of the amateur Astronomy Society. Encouraged by family and friends, he continued to build on his interests, and when he returned to France he became a member of the Astro Club Challadais. Today he is the president of the club. Astro Club Challadais hosts several events each year to educate locals about astronomical events.

The eclipse did not disappoint. There is a build up to totality. At 1:03 PM the moon began to cover the sun. Not many people noticed at first, but when the word spread, people began to monitor its progress. There was still over an hour until the sun was completely covered, so, for the most part, things continued as they had been going. People were talking to their friends and families, kids were playing in the playground, you know, a typical day in the park. 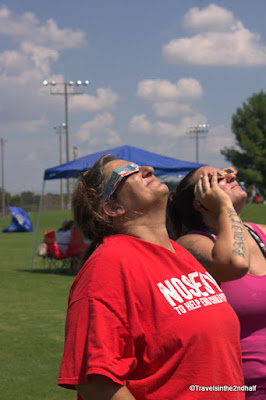 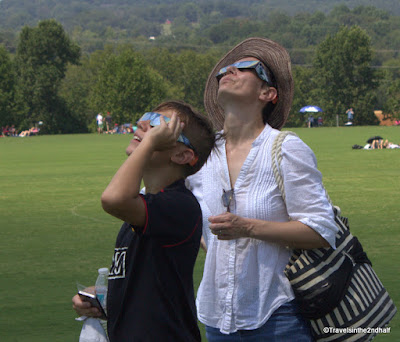 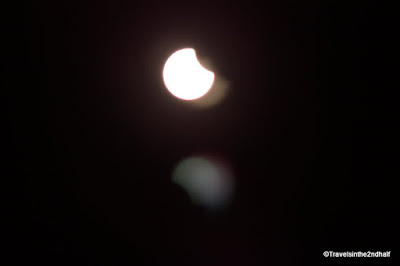 As time went on, a couple of things changed. First, it started to cool down. The temperature dropped and a breeze picked up. Then the light started to change. It didn’t seem to darken, and shadows were just as sharp, but the quality of light shifted. It seemed “not right.” 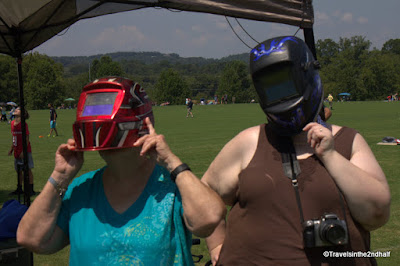 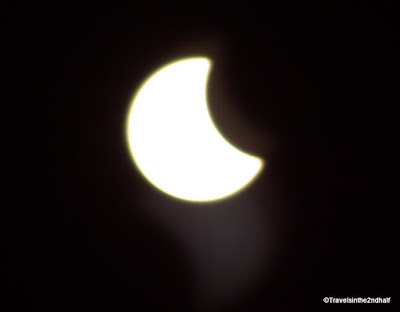 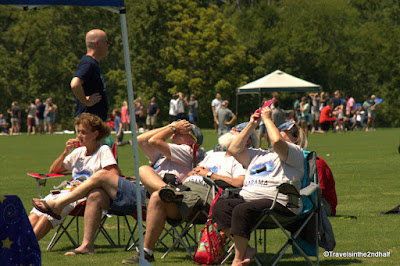 Finally, at 2:32 PM, the moon passed completely in front of the sun. It was like the lights going out at a theater – a fast fade to dark. It wasn’t quite a night sky, but it was dark enough to see Venus on one side of the sun and Jupiter on the other. The entire horizon was sheathed in the colors of sunset, beautiful reds and oranges. 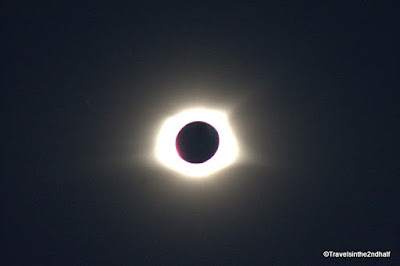 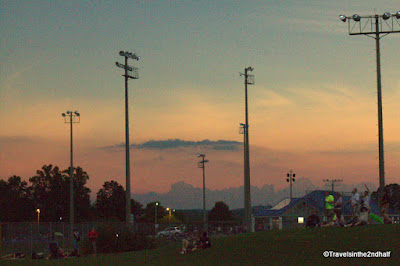 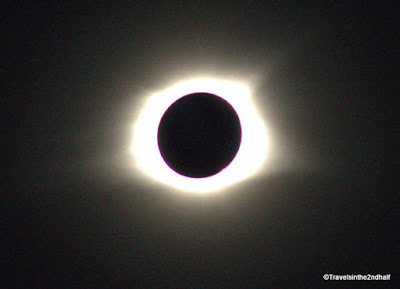 I was awe struck. So were just about everyone in the park. People gasped and cheered. They pointed out sights to those around them. People took off their glasses and soaked in what they could see, just enjoying the experience.

Then, just like that it was over. The moon started to clear the sun. The light and heat came back. Everyone cheered again and then started to pack up and leave.

Seeing the total eclipse was amazing. The changes around me were fascinating. Watching people who might rarely look up at the sky become interested in the universe did my science teacher heart good.

I am looking forward to 2024, when the path of totality will come up through western New York State.
Posted by Jonathan L at 11:42 AM 1 comment: