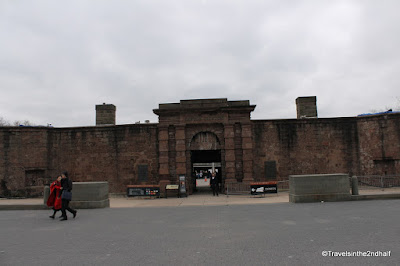 Battery Park is a fun place to visit, and has a special place in my heart. Growing up in NYC I was taken on the trip that almost every child of my generation went on – across the Harbor on the Staten Island Ferry. It was an easy way to get out of school on a trip and a free way to see the Statue of Liberty. And the trip came with time in the park to play and run around. The Battery also a place that I used as a teacher to demonstrate the effect of salt water and weather on bronze and granite statues when I taught chemistry. My students were fascinated by the difference in how bronze statues were affected by weather in different places. Statues in the center of Manhattan would turn black, while ones in The Battery were green. This opened up a whole series of lessons on the chemistry of metals.

Most people know Battery Park as the place they go to get on the ferry to The Statue of Liberty. Cool people know that it is where Roberta met Dez while seeking Susan. But few people know that the park has a history that goes back to the origin Neuw Amsterdam in 1623.
About the “sale” of Manhattan; while the Dutch thought they were buying the land, most likely, the Native Americans thought they were agreeing to a shared use of the land. In Law in American History: Volume 1, law professor G. Edward White interprets the Manhattan “sale” from the Indians' point of view as “not relinquishing the island, but simply welcoming the Dutch as additional occupants,” – from www.mentalfloss.com

When the Dutch settled Neuw Amsterdam in 1623, one of the first things that they did was to set up a battery of cannon to protect their homes from those marauding British privateers. All along the southern tip of the island of Manhattan guns were laid to attack any ships that entered the harbor.

Over the centuries the Dutch, British and Americans expanded and improved the defense of New York City, and by 1812 Castle Clinton had been built to help protect the city from a British invasion. Castle Clinton sat on an island off of the coast of Manhattan. After the War of 1812 the fort was renamed Castle Gardens and operated as one of the premier concert halls for the city. By the 1850’s the city had used land fill to expand the park, and Castle Clinton now sat totally landlocked. It became an immigrant welcome center as boats delivered immigrants from Ellis Island, and 8.6 million people walked through its walls.

In the 1896, Castle Clinton was the first home to The New York Aquarium. The Aquarium was housed here until 1941 when Robert Moses planned to tear down Castle Clinton in  order to build the Brooklyn Battery Tunnel. Luckily there was a movement to preserve this site and while the Aquarium moved to Coney Island, Castle Clinton stayed put.


Today Castle Clinton is a National Monument and the ticket office for ferry to the Statue of Liberty and Ellis Island. There is an ongoing renovation project at the Castle and the building of the new South Ferry subway station unearthed part of what is believed to the original battery wall.
Battery Park is 25 acres in size and includes many paths, memorials and a waterfront promenade. There are too many individual things to show here, but the park website shows all of them. Here are some of my favorites:
As you might notice, the statue of  Verrazzano has undergone restoration, and is no longer useful tp show the effect of weather on bronze. 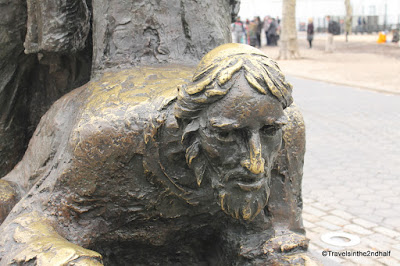 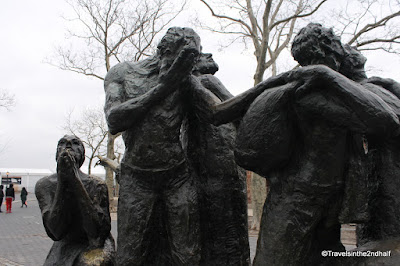 One new addition is the Seaglass Carousel. Here, one rides in “bio-luminescent” fish, an homage to fact that The Battery was the original home of the NY Aquarium. The ride is accompanied with a sound and light show. 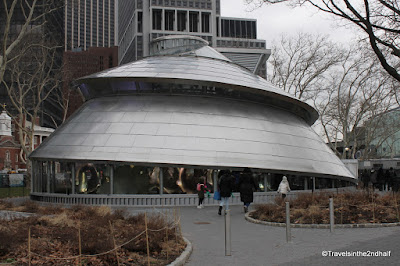 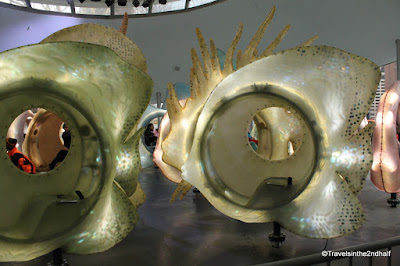 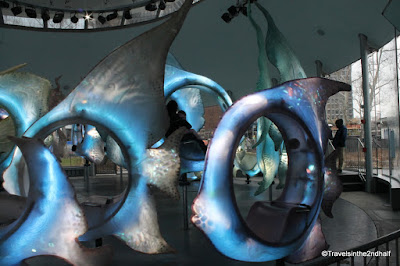 So if The Statue of Liberty, Ellis Island or the Staten Island Ferry are on your plans when you come to New York City, plan some extra time to spend at The Battery. 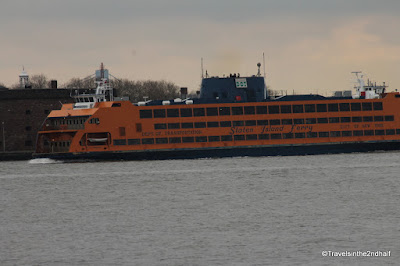 Getting There: Take the #1 train to South Ferry, The #4 and 5 trains to Bowling Green or the R train to Whitehall Street.

Cost – The Seaglass Carousel costs $5/ride. During the winter it has very limited hours (Sat/Sun/School holidays)
Posted by Jonathan L at 4:30 AM 1 comment: