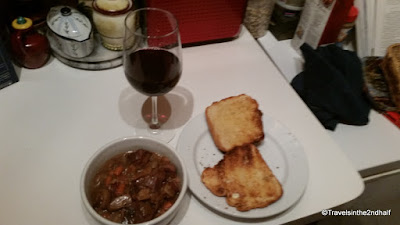 The practice of taking the meat of an animal and cooking it in a liquid base goes back as far as recorded history. And it is done in some form everywhere that people cook food. That is right, the stew is ubiquitous.

The website - www.Foodtimeline.org gives a short but comprehensive history of soups and stews here. One point that they make is that main difference between a soup and a stew is where in the meal the dish is served. Soups are an early course, while stews are a main course. The other difference they give is that the act of stewing is to cook in the smallest possible amount of water:

[1952] The Master Dictionary of Food & Cookery, Henry Smith [Philosophical Library:New York]
"Soup as a food consists of water in which meat, fish, poultry, game, vegetables or even fruits are stewed, to extract all the food value with the least possible loss of vitamins and flavour. Cereals and thickening agents are sometimes added to give body."---(p. 225)
"Stew...is nothing more or less than simmering foods in the smallest possible quantity of liquid. The meat, poultry or game and liquid are served together as a 'stew,'...Stewing has many advantages from the nutritive and economic standpoints."---(p. 230)
Taken from www.foodtimeline.com

The main thing about stews is that they are a way that poor people could take cheaper cuts of meat, the one that the rich did not want, and by cooking slowly, make them edible. By simmering the pieces of meat for a long period of time they become much more tender and juicy. And by adding herbs and vegetables the meat gains flavor.

Stews are also a communal meal, and one in which a small amount of meat could be used to feed a whole family by adding less expensive vegetables. So stews became a mainstay for working class families. A stew pot could be started on Sunday. Then, when the family was around the table at the end of the day, portions could be served out. The leftovers could be stored and added to during the week.

In The New York Cookbook, Molly O'Niell gives us a recipe for a Port and Ale Beef Stew, a traditional British dish. This is what I set out to cook tonight. I immediately ran into a major problem - my bottle of port rolled off of the table and shattered before I could use it. So I dove into my somewhat limited wine collection and came out with a bottle of red wine from the Tierra Seca vineyard in the Yecla region of Spain. A blend of merlot, syrrah and monastrell wines, it provided a nice base to the stew and mixed well with the Arrogant Bastard ale.

The wine and ale along with carrots and onions provide a deep rich flavor for the beef. One interesting aspect of this stew, is that there are no starchy vegetables in the mix. I like this because the only starch is the flour added during cooking, so the liquid stays mostly liquid.

I served the stew in a bowl with home made sour-dough bread, again, the tangyness of bread was a nice complement to the flavors of the stew. Altogether I was very happy with meal, and so was The Amazing Ms. D.