To be honest, Los Angeles is not my favorite city. I have always felt that it is more of an over sized suburb rather than a city. You know, the kind of place where no one ever walks, and the car is king. However, about 5 years ago one of my daughters moved out here, and in my time visiting her, I have discovered some parts of the city where walking can be fun and interesting. 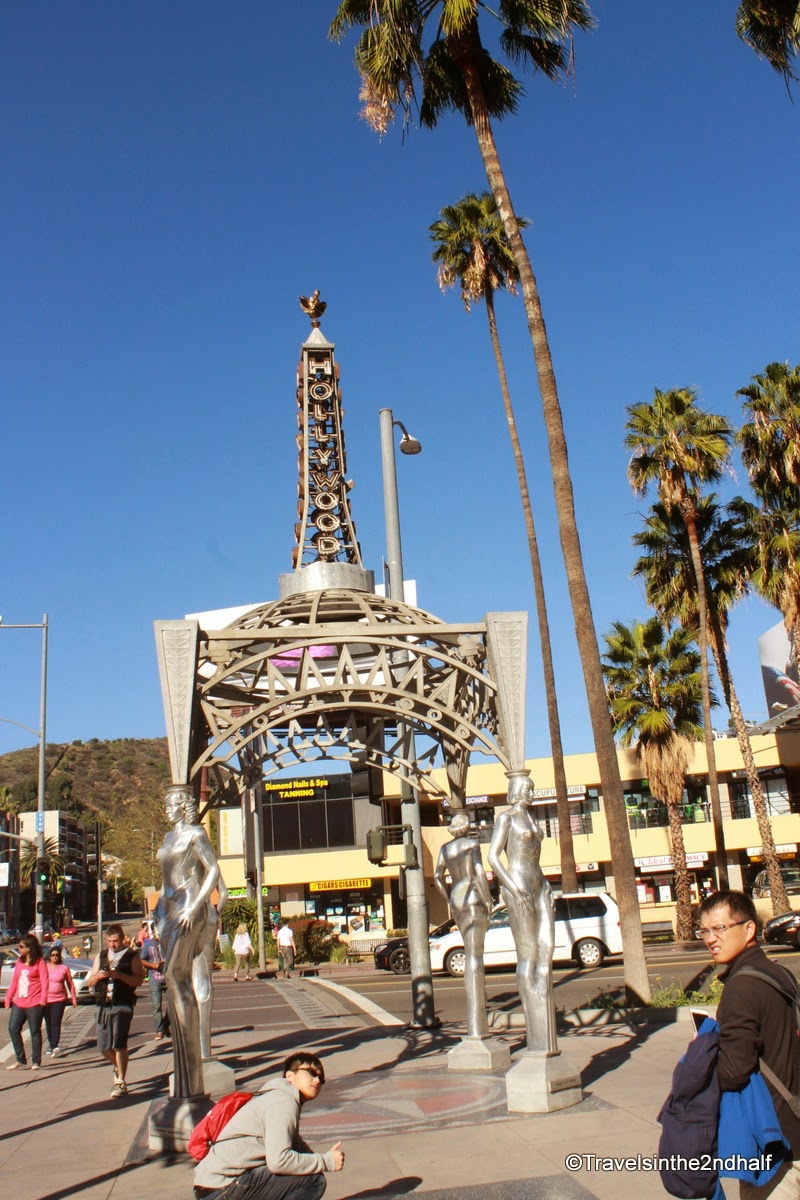 The four pillars of this "gate" are tributes to four famous actresses who represent the actresses of all races: Mae West, Delores Del Rio, Dorothy Dandridge and Anna May Wong

If you walk east along Hollywood Blvd you follow the walk of fame. It is a fascinating cross section of American culture. The placement of the starts is fairly random, and some of them are in better shape tan others - this is because it is up to the stars themselves to pay for cleaning and repairs.

As you continue east you get to the TCL Chinese Theater. 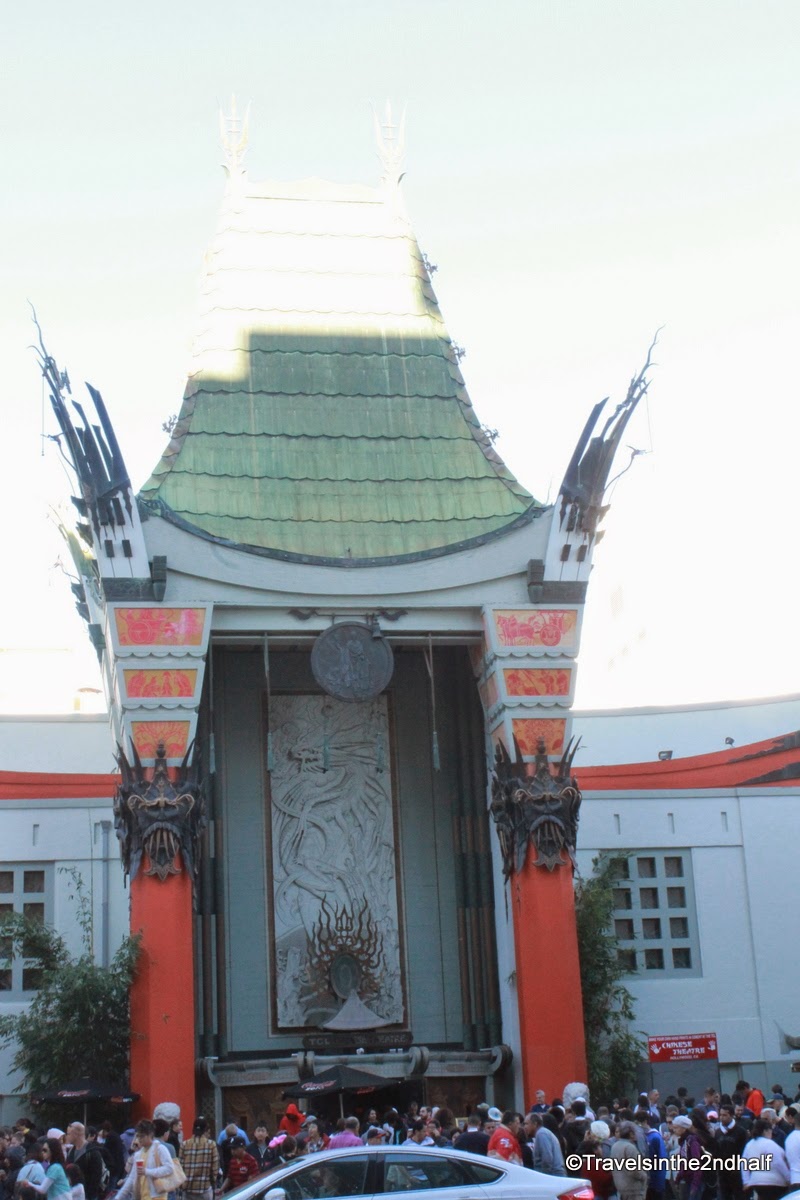 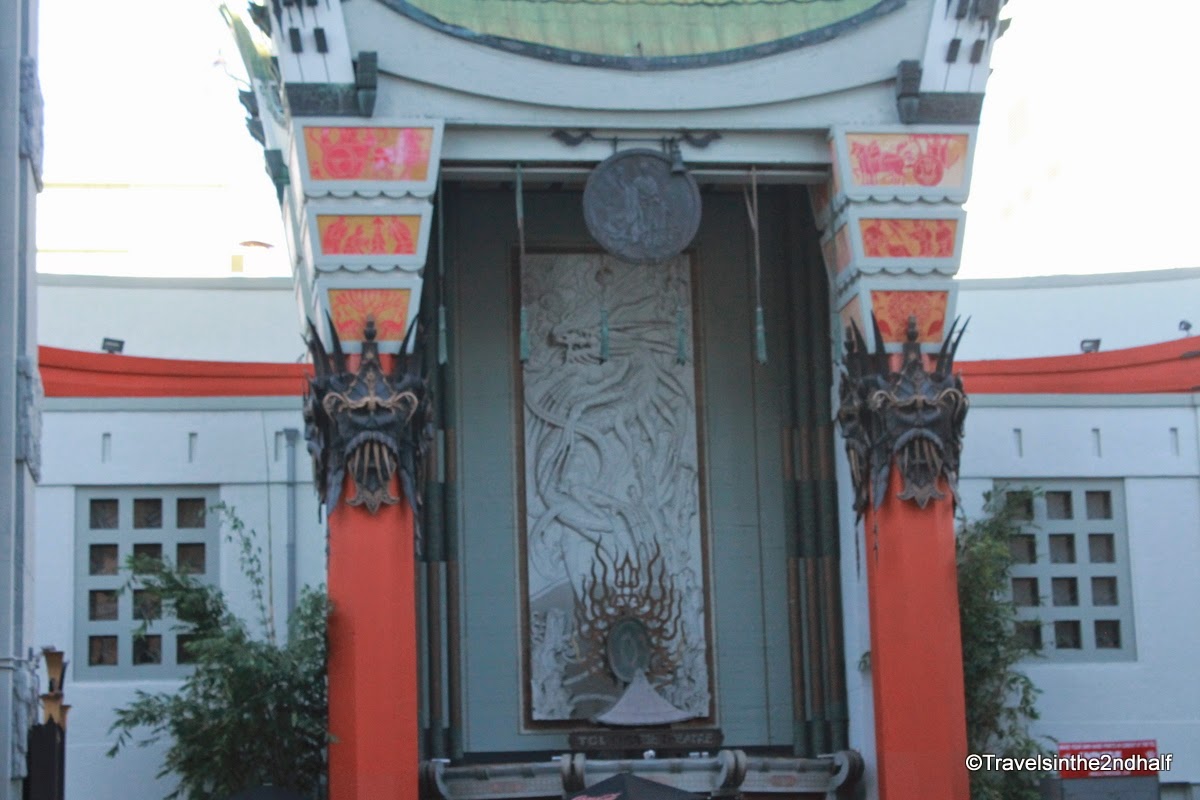 Now you might think that you will go and take a picture of yourself with the foot and hand prints of your favorite star. Let me warn you - this place gets a Times Square type crowd, complete with costumed characters who, for a tip, will let you take a picture with them. So getting the space to take a shot with just you and a 4 square foot piece of concrete is hard to arrange.

Walking back to La Brea and then south there are some interesting things to see, especially this time of year. I encountered a pop-up Christmas tree stand called The Lopez Ranch. Now Christmas Trees in LA can seem incongruous under the best of circumstances, but then I was reintroduced to idea of "flocking." Flocking is the spraying of a snow-like substance onto the branches of the tree. I had first seen it in Paris 18 years ago, where snow was added to make trees in public spaces to make it look more 'Christmas-y". In LA they have added their own take to it - color: 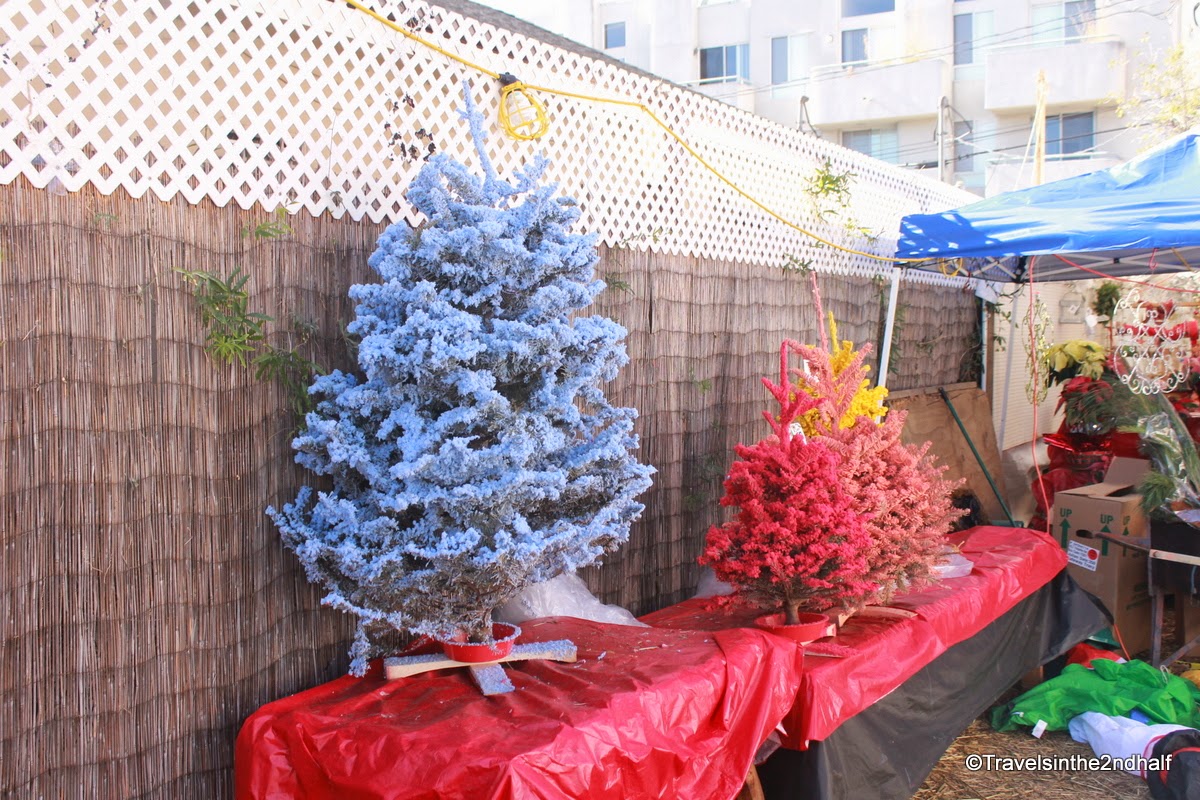 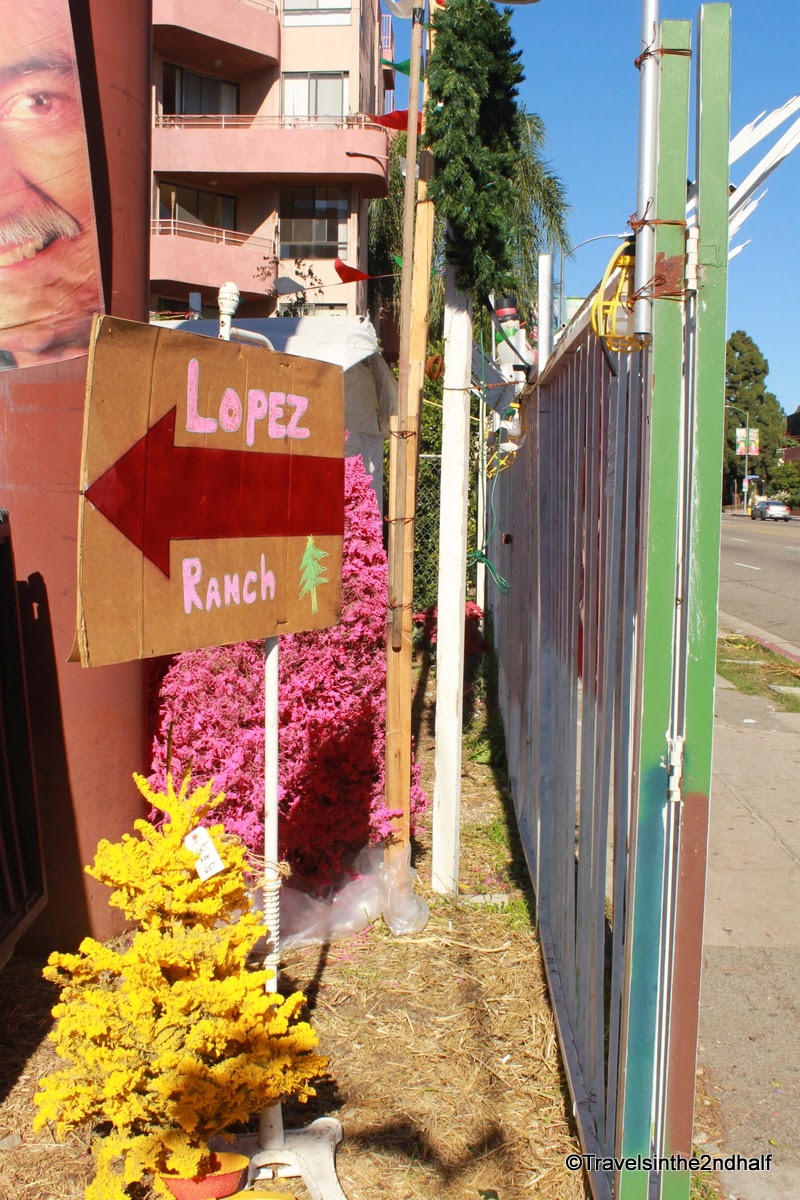 Continue south on La Brea and you get to this incongruity:

Yes that is Kermit the Frog in Charlie Chaplin's Little Tramp outfit. The reason? This is the home of Jim Henson Studios. 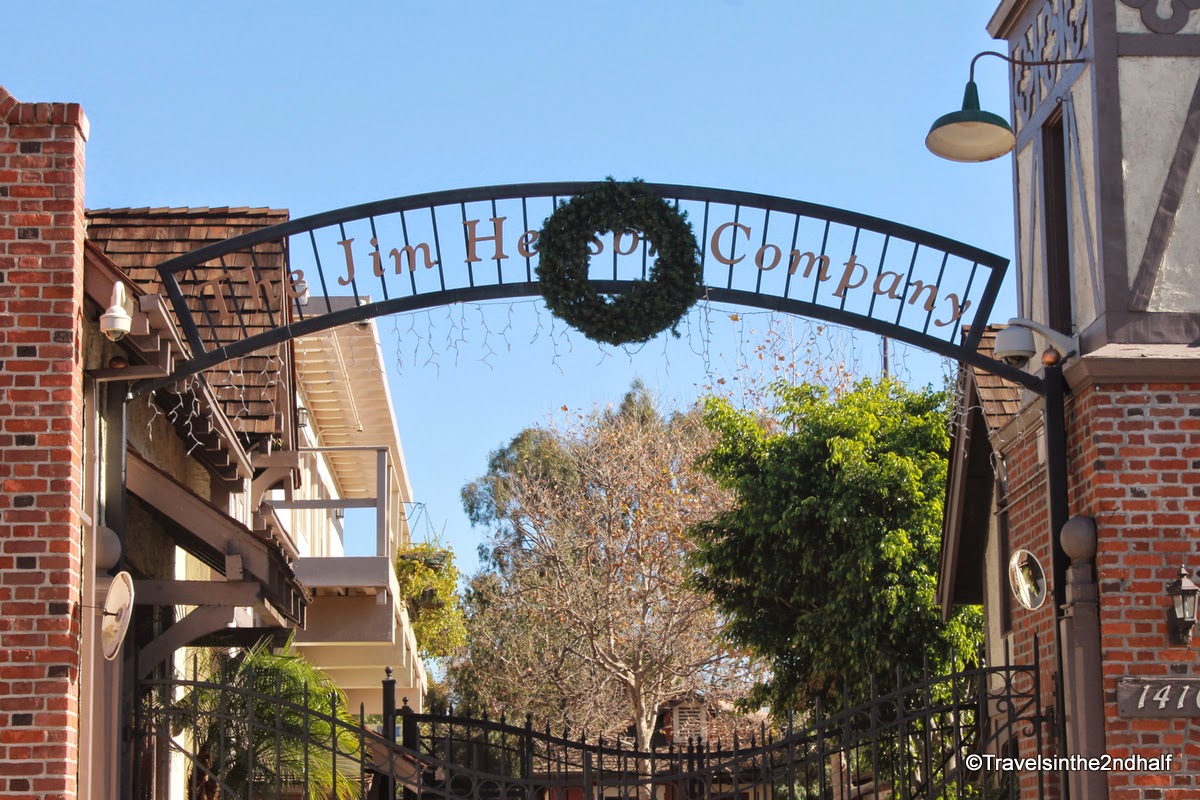 But the history of the studio goes back to the 1920's. It was the home of Charlie Chaplin's studio. So in tribute, Kermie wears his costume 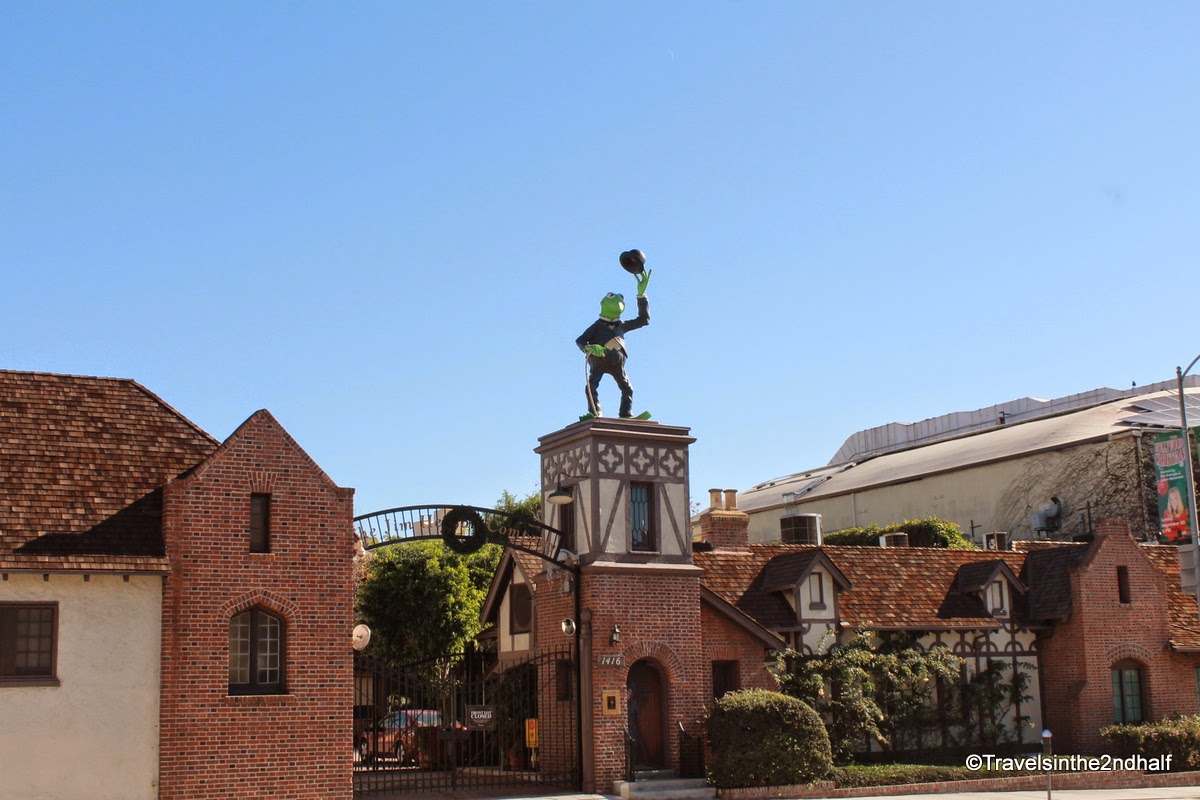 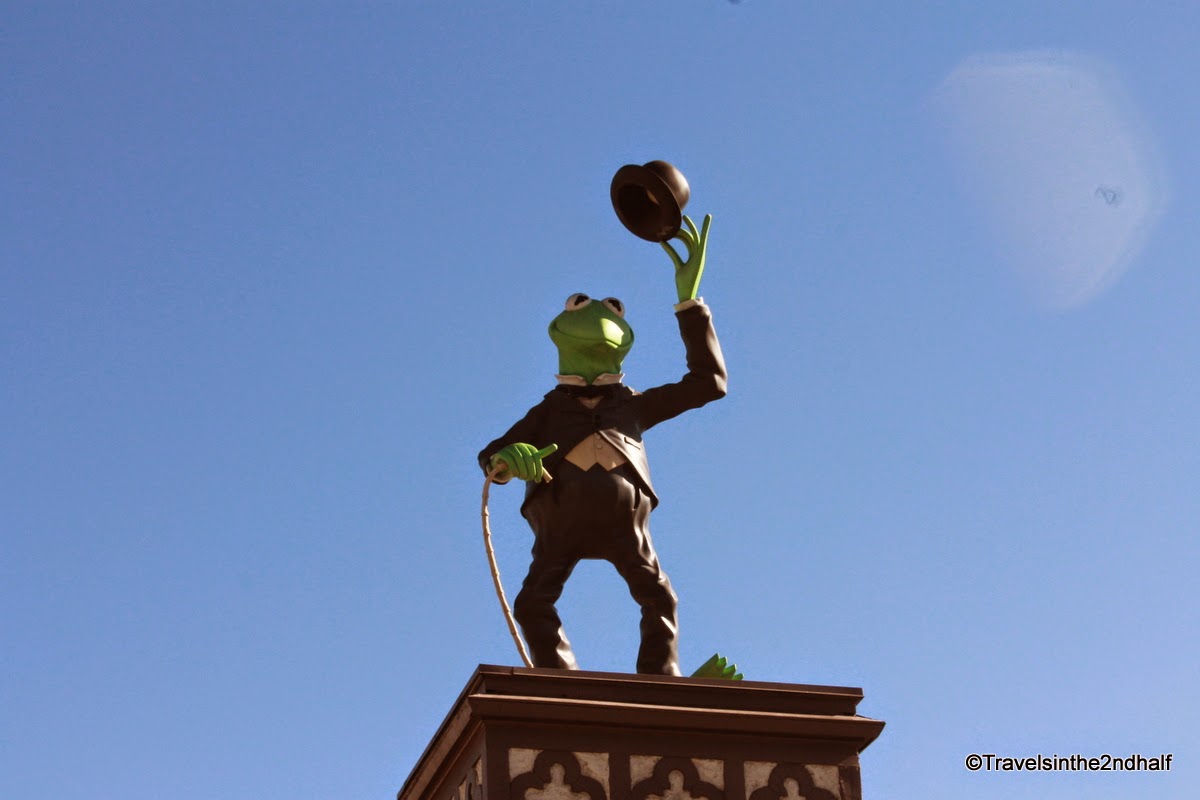 But don't worry, Charlie is still hanging around: 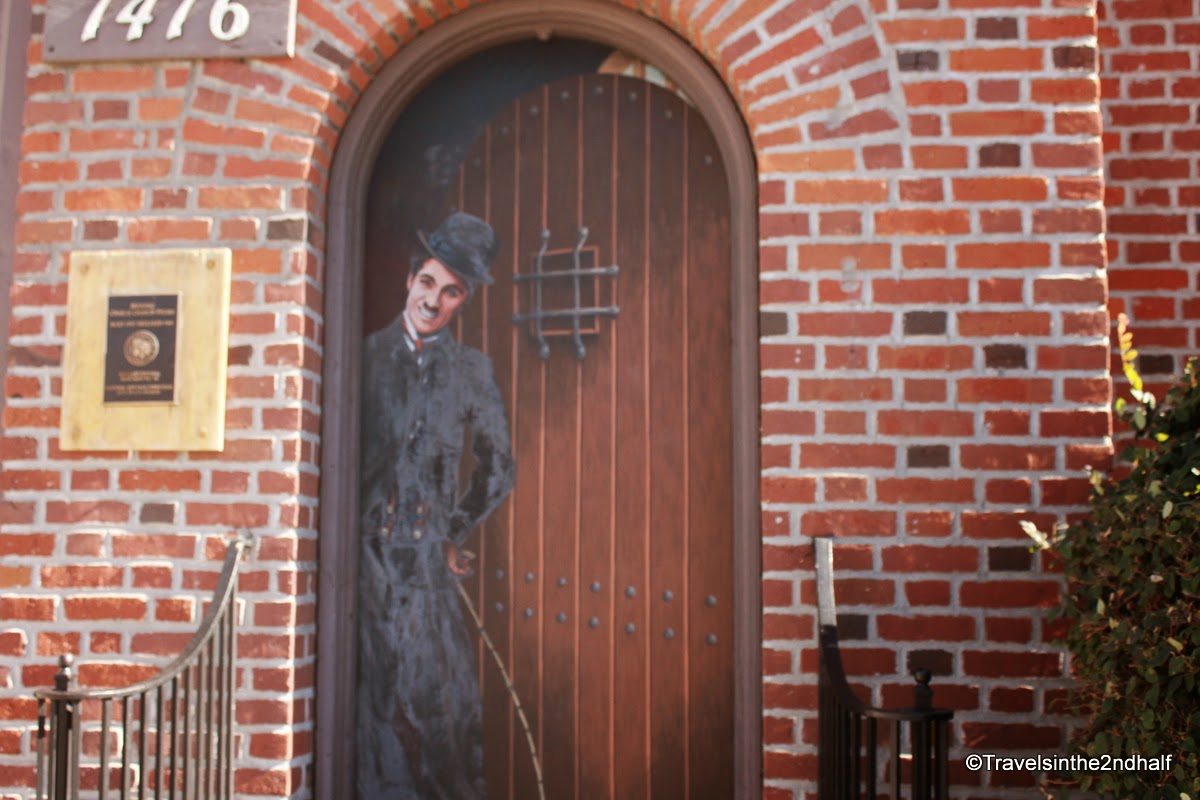 There are some other classic things to see:

LA is also home to more hamburger chains than you can stake a stick at. Everyone knows about In n Out Burger, but there are others: 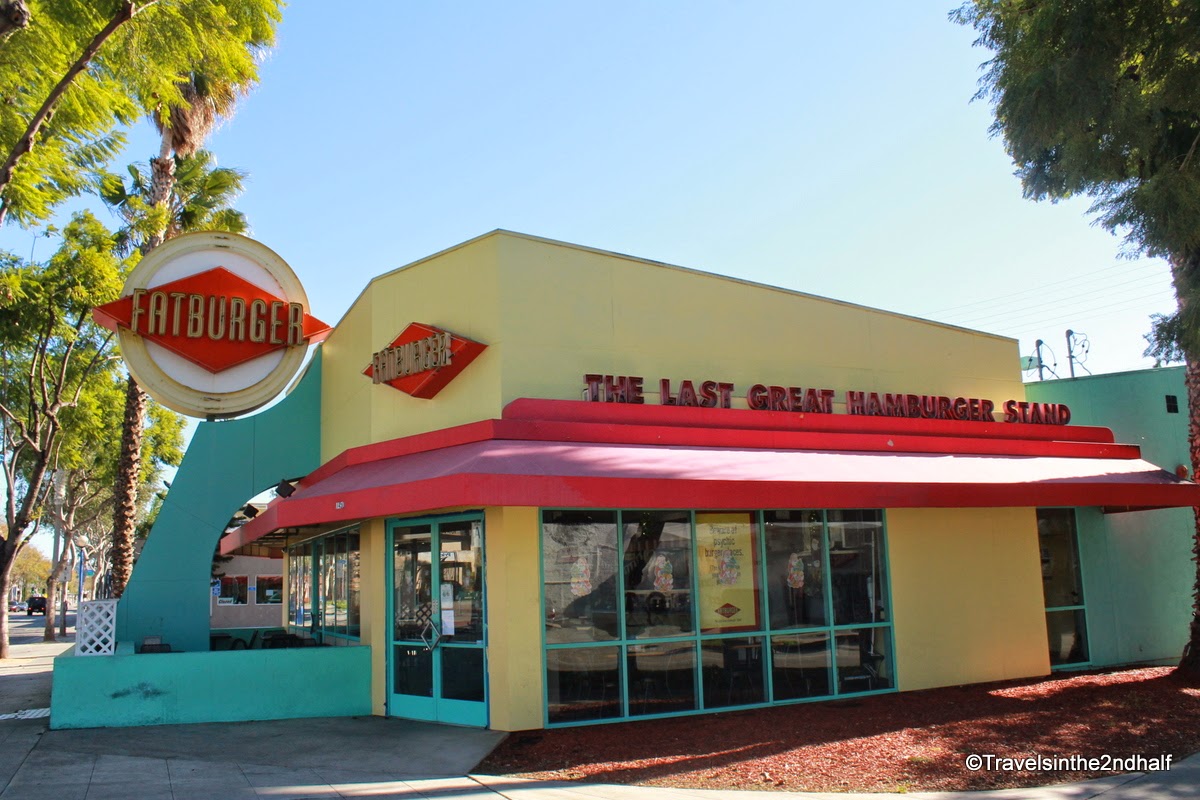 I will add my two cents to the "best burger" debate later in this series.

One thing that I like about LA is that there is a lot of street art, both formal and informal: 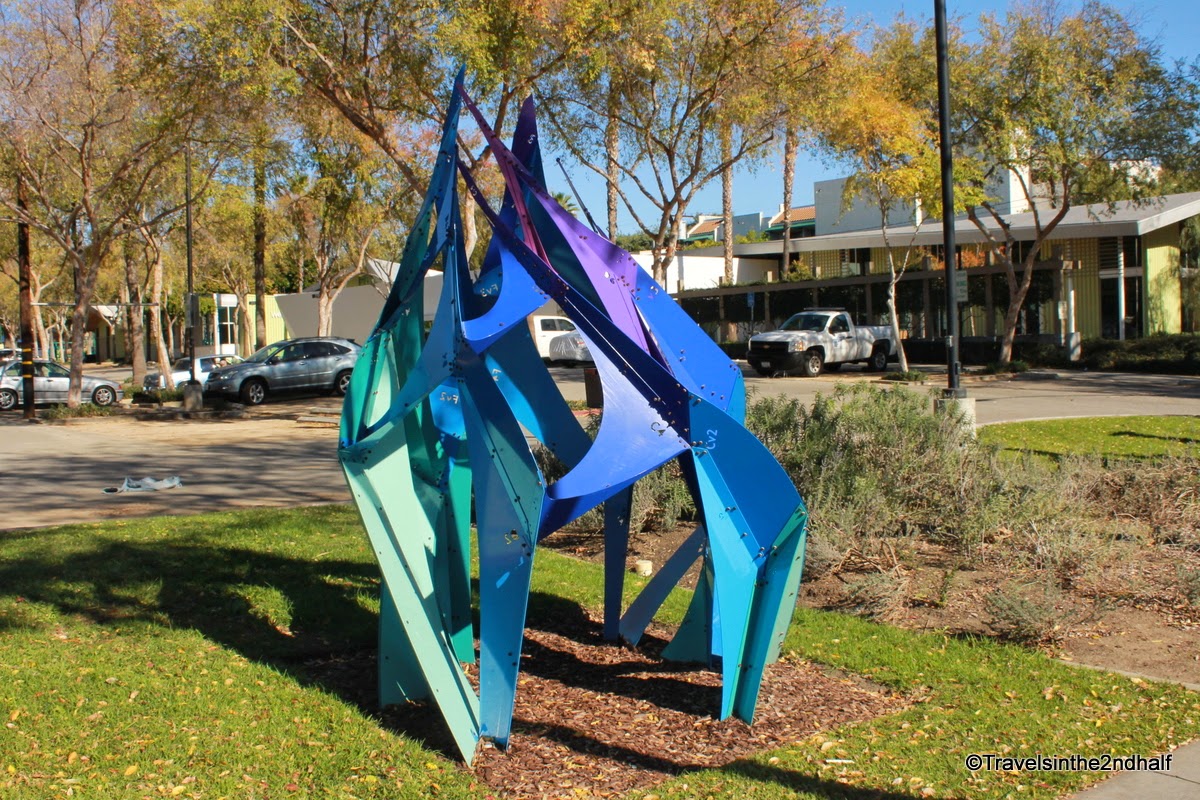 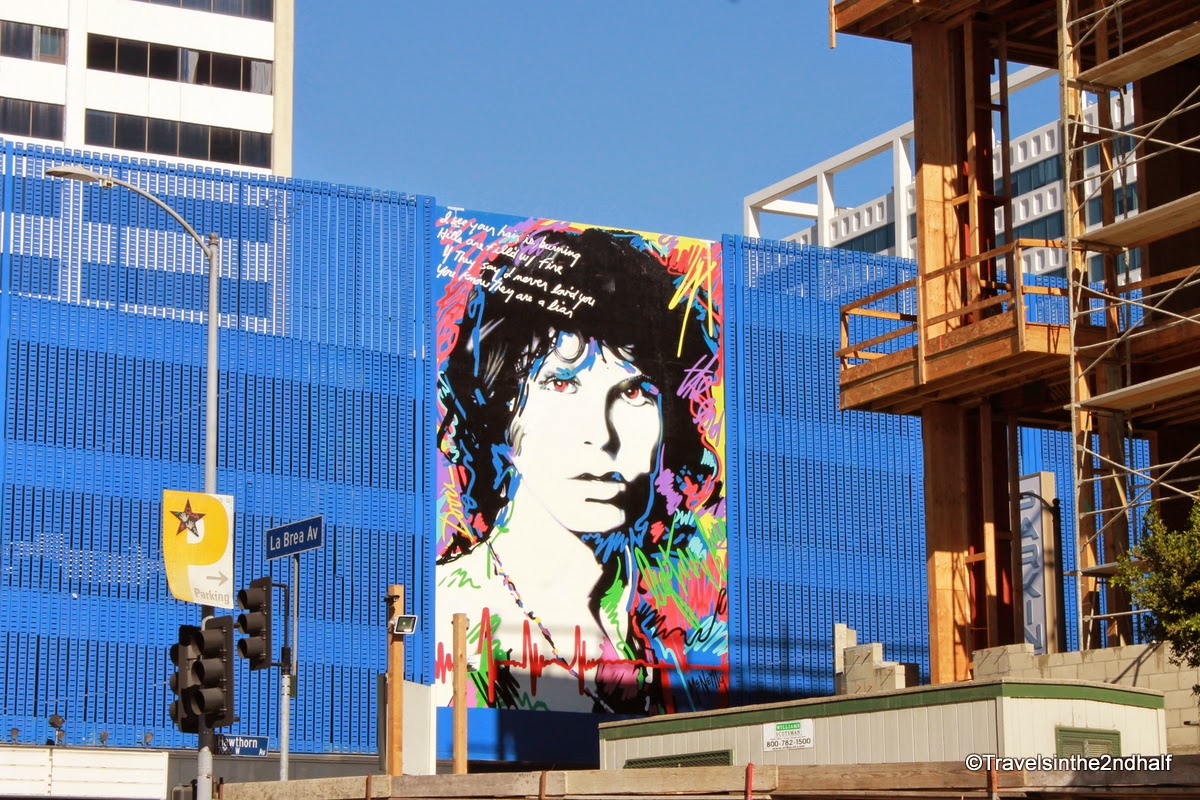 One last thing today. When you get out of your car and slow down you do notice other pieces of LA weirdness that puts a smile on you face. I offer this in evidence: 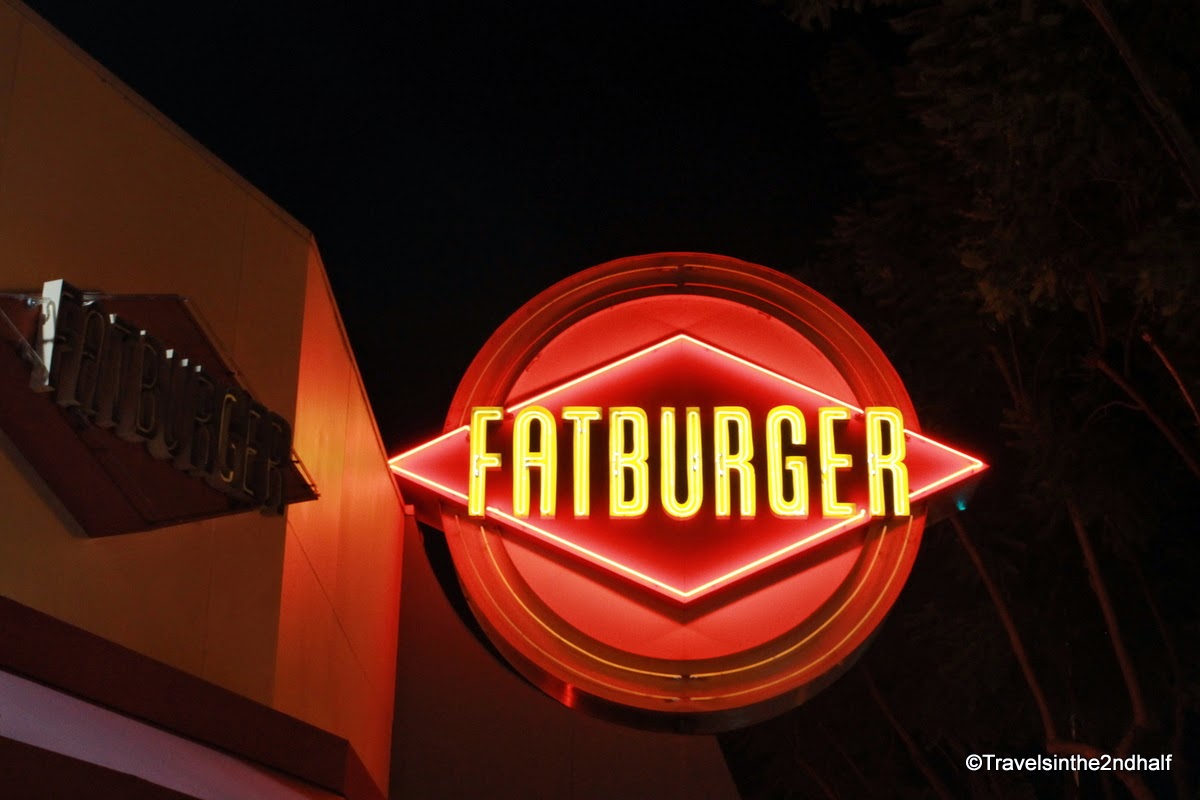 Posted by Jonathan L at 7:55 PM No comments: