I have traveled to Puerto Rico many times. It is where the Amazing Ms. D is from, so visiting family is a frequent activity. It has given me the opportunity to really explore some parts of the island. We spend most of our time in the San Juan metropolitan area, and Old San Juan is one of my favorite places.

When most people think of San Juan, it is Old San Juan that they picture. The oldest part of this area are the city walls, which were built in the 16th century to protect the settlement from British and Dutch invaders. Most of the original walls are still standing, surrounding Old San Juan on three sides. Touring the length of the walls is an easy and beautiful walk.

Start at Plaza Eugenio María de Hostos, across from the U.S. Customs House. This square, with its ancient Ceiba tree, was a market place in the old days. Farmers and crafts-people would come from surrounding areas to sell their goods. Today the headquarters of Banco Popular towers over the plaza, and there are stalls for artisans for continue this tradition.

The west side of the plaza is the entrance to the Paseo La Princesa. This tree lined promenade along the foot of the city walls. It was home to a prison, built in 1837, that took the name of the walkway. Part of the old prison is now an office for the Puerto Rican Tourism Company. On many weekends, the Paseo becomes a craft market. As in days gone by, artisans come and set up their booths to the things they make. It is a great chance to meet and support local artists. 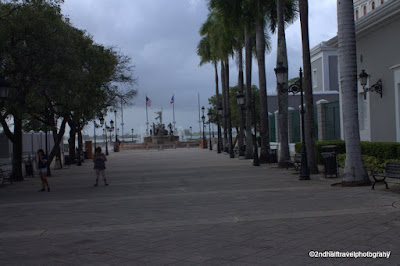 At the western end of the Paseo is the Raíces Fountain. The fountain was built in 1992, to commemorate the 500th anniversary of the founding of Puerto Rico. Its figure represents the raíces (roots) of the island in Taíno, African and European cultures. Here the walkway turns follows the wall north. If you look up you will see the garitas, the old guard stations, built into the wall. You walk at the base of the wall, along the shore of San Juan Bay, up to the Puerto de San Juan, the old entrance to the city. It is a very nice walk along the water, but it can hot and there is little shade in the afternoon.


When you pass through the Door, you will find the beautiful, colorful architecture of the old city. Walking these here is one of my favorite things to do in Puerto Rico. The pastels of the houses and the narrow streets hold my eyes, and transport me to another time. Even though they are currently filled with cars and small trucks, I feel what it must have been like when horses and people were all you saw on these streets. The fronts of the houses have not changed in the past hundred years. The old balconies still hang over the narrow sidewalks. Old street lamps, now changed from gas to electric, line the walls. And the doors! Beautiful old wood doors give an air of mystery, hiding their secrets from view. Every once in a while, you find a house with an open door. Down a dark hallway there is a hint of a courtyard, or part of a tiled stairway leading up to someplace that remains invisible.

Walk along the streets, up the hill, to the Catedral Basilica de San Juan Bautista, Old San Juan’s main cathedral. It was built in 1540, but it as been renovated many times, most recently in 1917. The cathedral was designed in a typical style of the Spanish Colonial period, with a rounded bell tower over the church’s façade. It houses the tomb of Ponce de León.

Well, you have made it half way through the walk. Next week we will finish our tour, stopping at a couple of forts along the way.
Posted by Jonathan L at 5:00 AM