The Rubin Museum - Home to Himalayan Art in NYC

New York City is home to many small museums that highlight specific areas of art or history. One of the best is he Rubin Museum, which focuses on the people of the Himalayas.

The Rubin Museum was founded by Shelly and Donald Rubin. They first bought art from the Himalayas in the 1970’s. Over the following decades they amassed a large and diverse collection. By the 1990’s they had decided to use their collection as the founding basis for a new museum to showcase and preserve art and culture from that part of the world.

In 1998, the Rubins purchased the former Barney’s building on 17th street, in the Chelsea section of New York. By 2004, when they museum opened, they had converted that site to a world class exhibition space. It’s six floors offer a comprehensive look into the past, present and future of art and culture from the Himalayas, and also relating to social justice campaigns around the world.

One of the things I like about the Rubin is that they usually keep exhibits up for a longer period than many other museums. Most are up for a full year. This offers the chance to return and explore ones you like in more depth.

One exhibit that I really enjoyed was called “Capping with Stones” which presented contemporary artists from around the world with pieces on the theme of non-conformity and a person’s potential for action.

There was also a wonderful exhibit on prayer-wheels. The belief is that by spinning the wheel, the person is given the chance to send their thoughts and prayers into the universe. Also the act of spinning the wheel offered a chance to enter a meditative state. There were wonderful traditntal wheels, and a modern, computerized version, that allowed the visitor to add their hope or thought to a collection that was offered for all to see.


As I walked to the museum, I happened to come through Times Square. It was at the new staircase over the TKTS booth, that I notice a different kind of removal from reality. Here I found dozens of people, standing around, all watching the world through their phones. 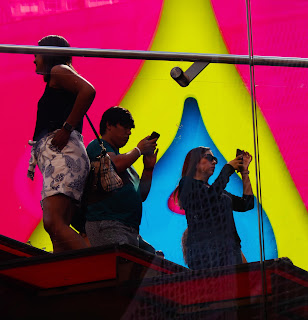 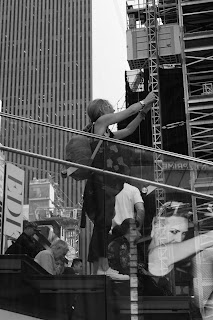 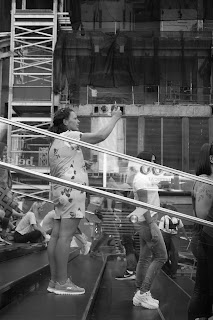 Once again, heading to a smaller museum gave me the opportunity to take my time and enjoy the journey, along with the visit.