I just spent a long weekend in LA getting to know my new grandson. I didn't have a lot of time for exploring, but I definitely have a few things to write about - more good food.

We went to two places on Melrose Ave that were fantastic. For dinner we went to Vinoteque on Melrose. they specialize in Tapas. Between the three of us we tried the lamb meatballs, fried artichoke hearts, white bean ragout, glazed pork belly and sliders. All were prepared just right and extremely tasty. They also carry a very good selection of wine and beer. For dessert we headed a block east to Nuveux Artisan Creamery for Handmade ice cream and excellent tea and coffee. the ice cream is made in store and the coffee is single source.

There are several coffee shops and bakeries (including NYC's Babycakes and Crumbs). There are several trendy clothing shops. I am a sucker for book shops and Chevalier's Books pulled me in. It is a nice little independent bookstore with a good selection of current and children's books. A little bit north of Chevalier's is Landis' Labyrinth a very nice toy store. What I really like was that they have a good selection of hand crafted toys and "natural" toys that are made without using dangerous chemicals. These were perfect places for a brand new grandfather to drop some bucks and spoil his grandson.

Larchmont also has a Sunday farmer's market. Fresh fruits abounded. Plums, nectarines and peaches, and something that you can't easily find in NY - fresh figs.

For breakfast we went to the Larchmont Bungalow. They have a delightful selection of omelets, egg dishes and pancakes. I had the Cobb omelet which came stuffed with fresh veggie's, cheese, turkey and ham. The son-in-law LA had the Meat Sensation omelet, which he could not finish, while The new mommy had the Smoked Salmon Benedict. All of the food was wonderful, and there was plenty to go around. I would be remiss if didn't mention their Red and Blue Velvet Pancakes. These are rolled and filled with a cream cheese filling, these looked sinful, but mouthwatering. 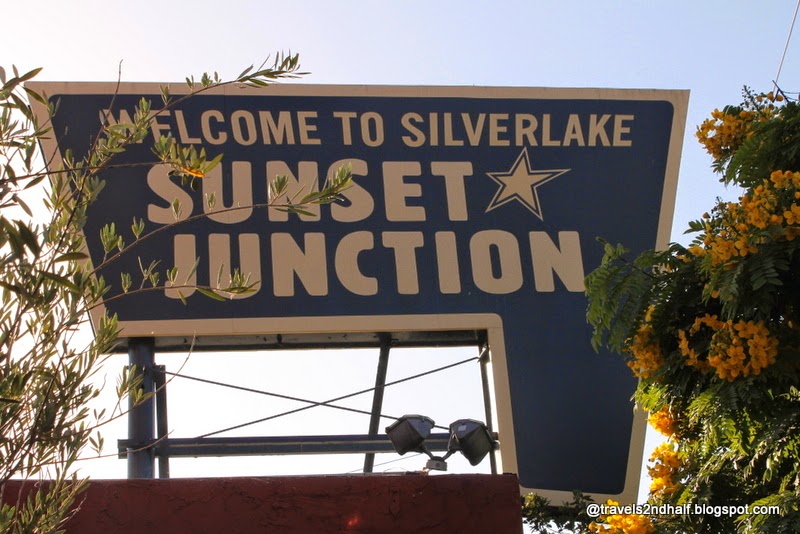 The Silver Lake neighborhood takes its name from the reservoir in the neighborhood. It has a fairly interesting history. The highlights include being the home to Max Stennet Studios and Walt Disney's first studio. While it has suffered an economic downturn, it is now being compared to Brooklyn's Williamsburg neighborhood for both food and nightlife.


If you are walking around the Sunset Junction section of Silver Lake and you want a quick snack I suggest Tacos Delta. 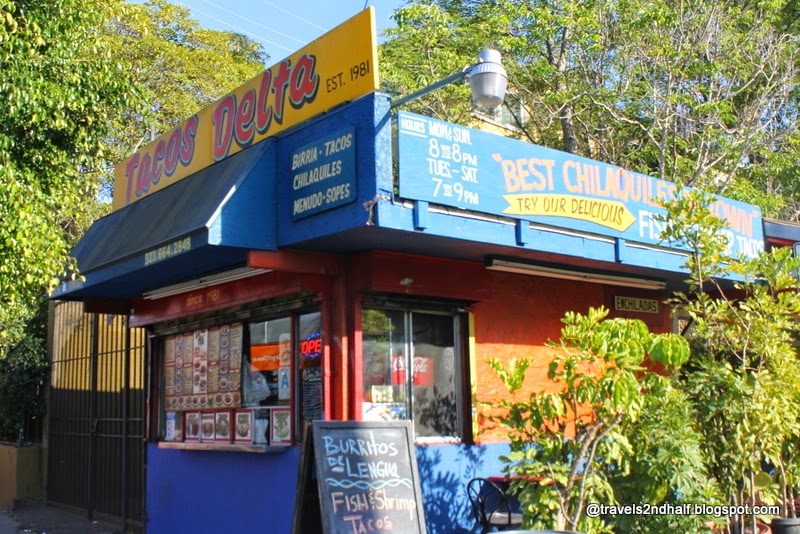 A little cement building with a shaded area to eat out back, these were delicious, fresh and inexpensive. Soft tacos start at $1.47!

The Pine and Crane

If you are in Silver Lake for dinner I suggest The Pine and Crane. The Pine and Crane is an example of the new trend in restaurants that is not "fast food" but not a traditional restaurant. Maybe you would call it "high quality fast food." You order and pay at the counter when you enter. The menu is limited with 7 or 8 apps, a few salads and 6 or 7 main courses. Then you sit down and your food is brought over to you by a very friendly wait staff. I am not sure that I like this trend, but I loved the food at Pine and Crane. I had the Asian Slaw and the Jidori Chicken. The slaw was fresh, crisp and full of flavor, although maybe a little heavy on the sesame oil. I could have used a little acid to brighten it up. The Jidori Chicken is a dish that I have not seen on the east coast. It is a stir fry mix of chicken, mushrooms, peppers and whole roasted garlic cloves. The peppers give a nice heat, and the garlic add flavor and sweetness. Overall a really nice dish that I would love to see gain a hold in NYC.

My last evening I went to the Abbot Kinney section of Venice (see map) to eat. Another trendy area, these 3 blocks are kind of the antithesis of Venice Beach. There are many choices of restaurants here and really like Feed Body and Soul's Happy Hour menu. They have great tapas from $5-10 and their mixed drinks and beers are all $3 off. The bar is nicely stocked with high end bourbons, whiskeys and rums. The Asian Greens were a little salty, but they had a nice char on them that added flavor. But the hit is their Sesame Chicken Skewers. Usually chicken skewers are dry and flavorless other than whatever sauce they are served with. NOT AT FEED. Feed serves moist, delicious chunks of chicken with the skin still on them. These are cooked just right, with a pepper and garlic rub. They were one of the food highlights on my trip to LA. I also indulged with one of their 123 Crushed Margaritas. It was thirst quenching without being over sweet.