If you have never been to the Catskill Mountains in New York State you are missing one of the real beautiful areas of the Northeastern United States. The Catskills fill the area between the Hudson River to the east and the Delaware River to the west. They stretch from the I 87 corridor in Rockland county to the south up to near Albany NY. You can see a map here.

When most people think of the Catskill Mountains two pictures usually come to mind. Most famously is the Woodstock Festival (which did not take place in Woodstock NY, but that is another story). The other picture is of the old bungalow colonies and resorts that were the summer get-away for many NYers.

Last year The Amazing Ms. D and I traveled to the town of Hobart NY to attend the Festival of Women Writers (see my previous blog here). This is a wonderful weekend event with over 100 writers and readers taking workshops and shopping at the town's 6 bookstores. We returned this year and I got to spend some time exploring the area.

This area of NY has an interesting history. It was the last hold out of the old Dutch system of landlords and tenant farmers, called the patroon system. In the 1850's there was a revolt of the farmers, who could not own their land, called the Anti-Rent Wars. This struggle was the background to the novel and film Dragonwyck.

Delhi is the largest town in this area, with a population of just over 5000, and is the county seat for Delaware County. It was founded in 1798 by combining three small towns. It is also the home of SUNY-Delhi a 2 year/4year campus in the State University of NY system. Its Main Street (Route 10) runs parallel to the West Branch of the Delaware River and has many buildings that date back to the early 1900's.

One of the largest buildings on Main Street is the former home of Jackson and Mason. What struck me was the fact that this business was both a furniture store and undertaker. This seemed like and odd mix to me, but I guess if you can make furniture you can make caskets. As I was told "People had to have several occupations in a small town in order to make ends meet." 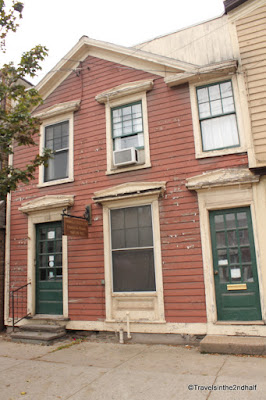 Sitting southwest of Delhi is the town of Hamden NY. With a population of about 1500 Hamden is a lovely little small town surrounded by mostly dairy farms.

The Hamden Inn is an original (1844) Catskill Stage Hotel. Today it is again a place to stay over night or to check in for a meal. It is run by the same people who run the Lucky Dog Cafe, which sits right across Main Street. The Lucky Dog is a great place to stop in for lunch. Out front is an old fashioned general store, and in the back is wonderful cafe. The food is all fresh, locally sourced organic fare. They make excellent salads, sandwiches and soups. 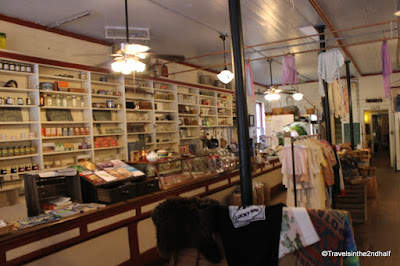 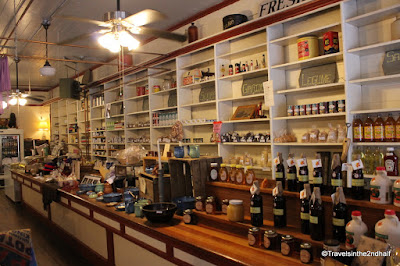 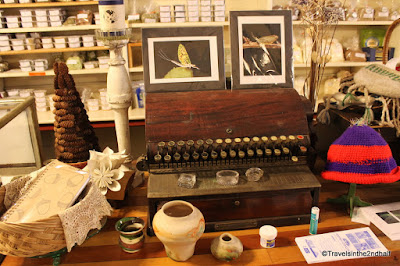 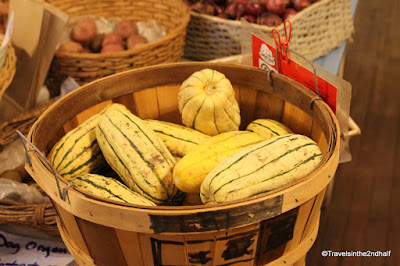 Just north of the center of town is the Hamden Covered Bridge. Originally built in 1859, this bridge crosses the West Branch of the Delaware River. 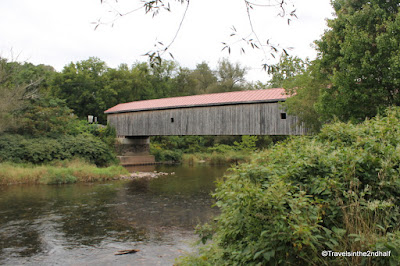 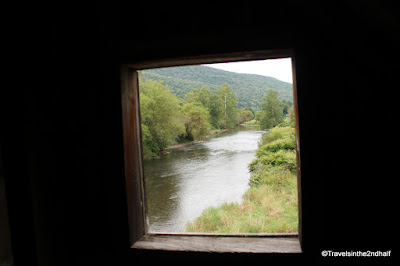 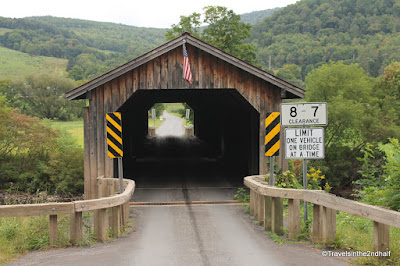 Delhi NY is 153 miles northwest of New York City, about a 3 hour drive. It sits at the intersection of NY 10 and NY 28. The drive from NYC is one of the prettiest drives, especially during fall foliage season.

There are many B&B's in the area. I highly recommend The West Branch House in Delhi. It is run by Jered and Martin. They have created a lovely place stay and their breakfasts are to die for. They are a couple of blocks off of Main street, so it is a very quiet stay.
Posted by Jonathan L at 4:30 AM