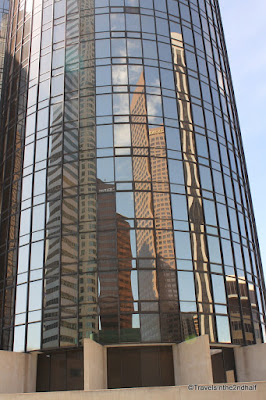 Yes Los Angeles is a city based on driving, but there are pockets that are very walkable. One of those pockets is the Downtown area, I spent a few days there during our grand adventure. Downtown LA stretches from Olvera Street and Union Station at its north end, to the Convention Center and LA Live at its south end. I explored several places within that boundary, and I walked the whole length.

This is not the first time that I have found neighborhoods in Los Angeles that easily walkable. In fact I was really impressed that even though we were in LA for 4 days and during that time made a trip out to North Hollywood, at no time during our stay did we need a car. Downtown LA is well served by mass transit. There are many bus affordable bus lines that crisscross the area, and there is a service called LA DASH that for 50 cents will take you as far north as Chinatown and the art district and as far south as Exposition Center and USC Campus. It was also fairly easy and affordable to use the busses and subway to get to places like Hollywood, LACMA and The Farmers Market. It made my heart warm to see this change, especially in a city that is known for being car centered.

At the northern end of Downtown LA is Olvera Street. This is the heart of old LA, where the city was founded in 1781. There were 1 founding families given charter by the Spanish Government. One thing that I found fascinating was that of the 11 families, that is 22 husbands and wives, only 2 people were of European descent. The other 20 were black, indian or biracial. This is one of those fact that seems to have been buried in history. Today Olvera Street is a place to come for Mexican food and souvenirs. There are a couple of historical museums, one is the Avila Adobe, built in 1818, it is one of the oldest houses in Los Angeles. 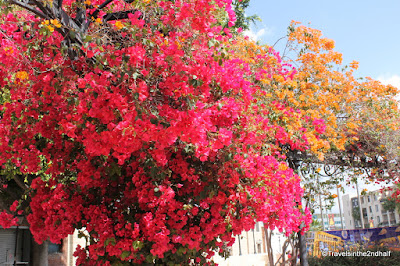 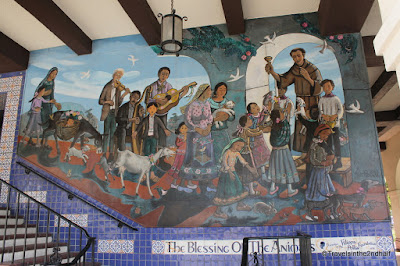 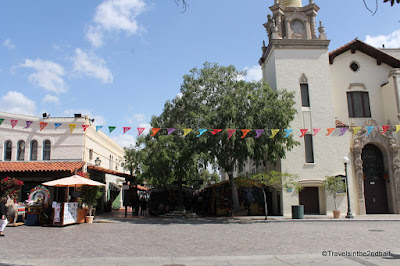 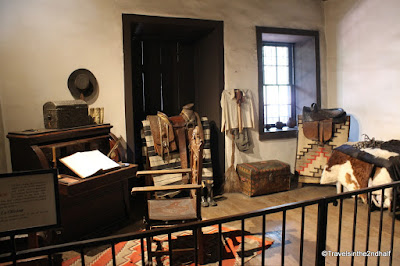 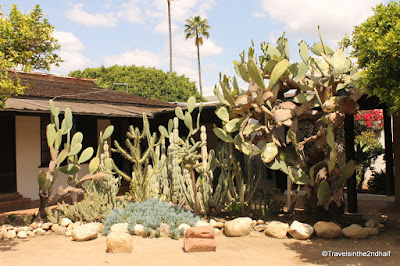 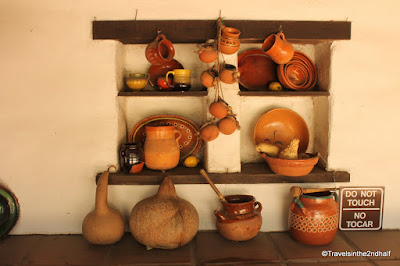 Another is a museum dedicated to the restoration of the mural America Tropical, which was painted in 1932 by David Alfaro Siquieros a contemporary of Diego Rivera. The mural represents U.S. imperialism in Central America and was considered to be communist propaganda. It was partially white washed in 1934 and completely covered in 1938. Restoration was financed by the Getty foundation (irony?) and the mural was available for viewing on its 80th birthday in 2012. 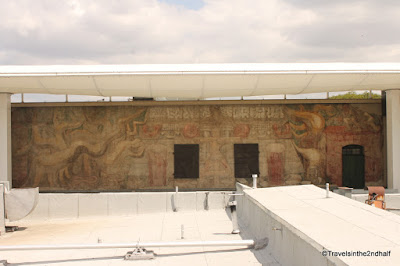 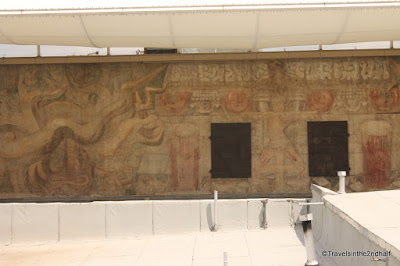 Unions Station is a grand old train station that still serves over 100,000 passengers each day. Built in 1938, it is an art-deco beauty. The waiting rooms are high vaulted with polished wood, and its old ticketing area amazing. Outside are several plazas that tie in traditional California with the art-deco movement. 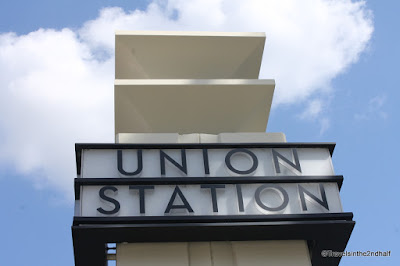 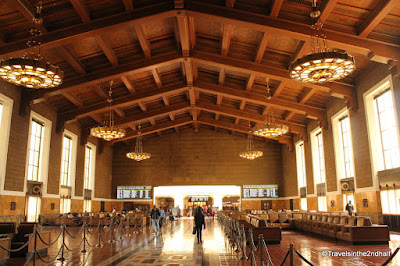 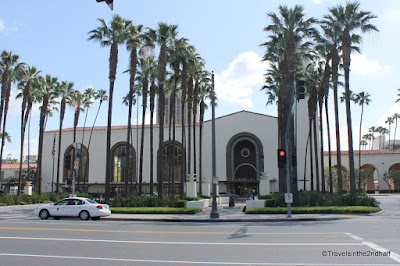 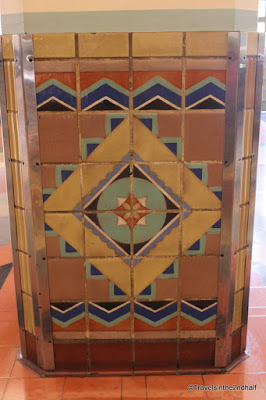 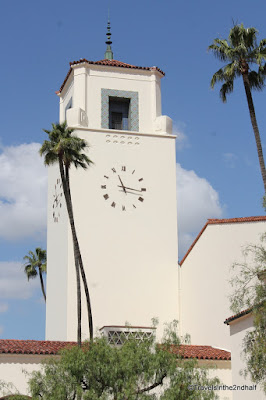 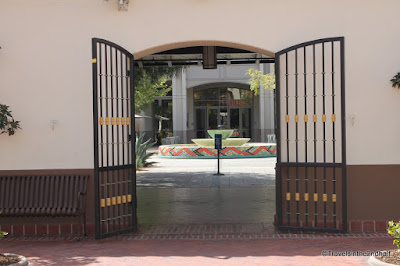 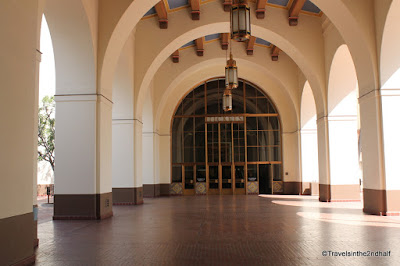 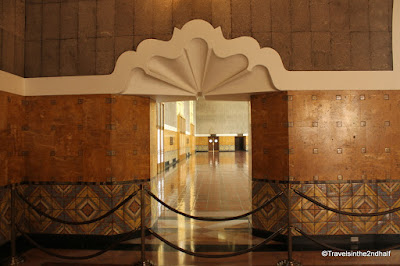 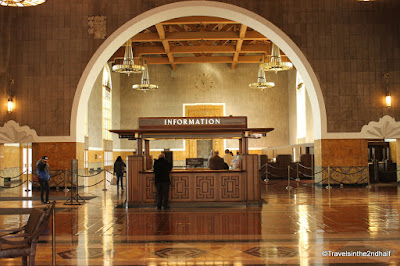 Bunker Hill sits on the west side of Downtown LA and it is home to both Los Angeles’ financial district and several important cultural institutions. One thing that really impressed me is that as Bunker Hill was built up during the 1980’s was that there was a lot of thought to including open spaces and public art. Everywhere I went, buildings had both indoor and outdoor courtyards which were filled with people during the day. The main street through Bunker Hill is Grand Avenue. This street is built on 2 levels. Most people are familiar with Lower Grand. It is the street that is used whenever a movie needs a place in downtown that looks especially closed in and dangerous. However Upper Grand Avenue is home to many cultural institutions. There are two museums dedicated to contemporary art – LA Museum of Contemporary Art and The Broad Museum, which recently opened. Also here is the Walt Disney Concert Hall, home to the LA Philharmonic.  At the south end of Bunker Hill is the central branch of the Los Angeles Library. Built in 1926, this is another beautiful building with a wonderful mosaic on its roof.

Looking for lunch while walking around Downtown, stop in at Grand Central Market,  a collection of food vendors with a wide variety of choices: 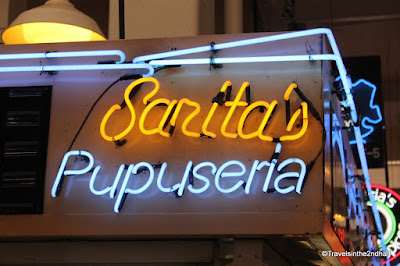 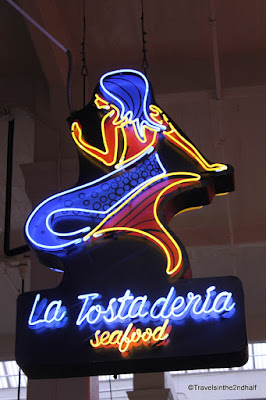 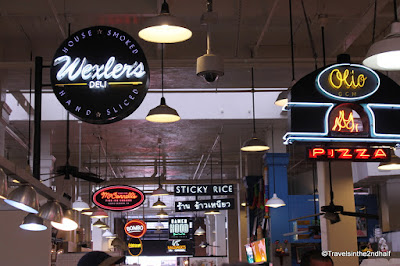 So the next time that someone says that you have to rent a car if you are going to visit LA, look at where you are going to stay. You might not need one after all. Get out and walk around, there is a lot to see on the ground.
Posted by Jonathan L at 4:30 AM