When you visit the Minneapolis-St. Paul area there are many things to see. In my opinion two places that should definitely be on your list are the Minnesota History Center and the Cathedral of St. Paul. These two buildings are near each other on Cathedral Hill. Together they present parts of the history of St. Paul, along with some beautiful views of the city. 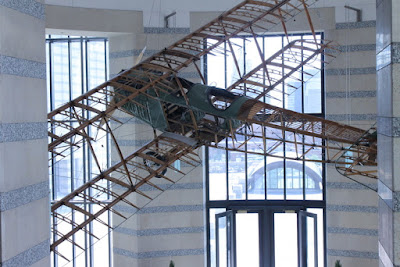 The Minnesota Historical Society and its museum occupy a beautiful building on a hillside overlooking downtown St. Paul. This very modern facility belies an interesting fact, The Historical Society was founded before Minnesota was even a state. Founded in 1849, the society had been around for 8 years when the state of Minnesota entered the Union in 1858. So even before it was officially formed, the state of Minnesota was aware that having an organization to collect historical documents and artifacts for future generations was important. Today, those artifacts are housed in an excellent facility that includes both permanent and temporary exhibits on history of the state.

The main permanent exhibit is called Minnesota’s Greatest Generation. Here you can walk through some of Minnesota’s history. Step behind a 1930’s soda fountain or sit in an old movie theater. Take a ride with paratroopers on a mission over WWII Germany. But most importantly, take the time to sit and enjoy the videos of the people who lived these experiences. Hear about their lives. Their stories are presented in a way that is not nostalgic and that presents a realistic vision of what life was like during era from 1935-1955.

Another permanent exhibit is Weather Permitting. Dedicated to all of the types of weather that you might run into in Minnesota, from thunderstorms to snow storms to tornadoes, this exhibit shows how Minnesotans have dealt with what mother-nature has thrown their way over the years. You can enter in ice-fishing house or ride out a tornado in a storm cellar. You will also see how people dressed for weather in decades past.

There are also temporary exhibits. When I visited over the summer the art work of Chuck Jones, one of the main animators for Warner Bros. during the heyday of Bug Bunny and others, were on display. Right now (Oct. 2016) there is a traveling exhibit from the Football Hall of Fame called Gridiron Glory. Over 200 photos and artifacts are on display along with several interactive displays.

I really enjoyed visiting the Minnesota Historical Museum. The exhibits are presented in a way that engage visitors of all ages. I watched kids playing at the soda fountains and at a replica munitions assembly line. I sat with people my age in a C-47 living through the Second World War. All of us were completely engaged in learning some of the history of Minnesota.

Continue up the hill from the Historical Museum and you will arrive at the Cathedral of St. Paul dedicated to St. Paul the Apostle, name sake for the city of St. Paul. Built in 1915, it is the fourth largest and third tallest church in the United States. The church is decorated with 24 stained glass windows, has four main chapels and, behind the altar, six more small chapels dedicated to the national saints of the countries whose immigrants made up the majority of the Catholic population in St. Paul one-hundred years ago, Italy, France, Germany, Ireland and the Slavic countries. 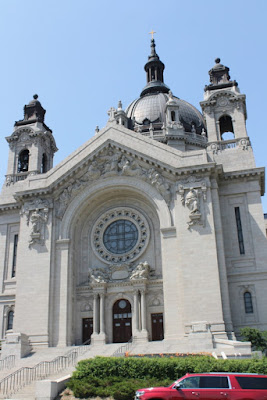 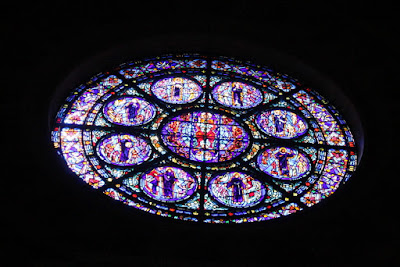 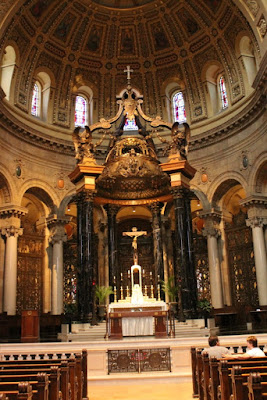 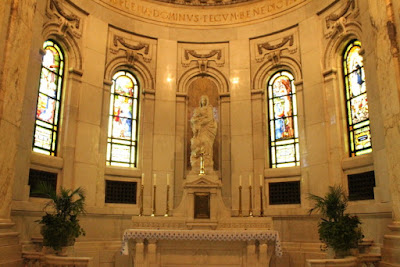 In my opinion, this cathedral is one of the most beautiful in the United States. I would suggest walking up to it from the parking lot at the Historical Museum. It’s setting on top of a hill, overlooking St. Paul says a lot about the role of the Catholic Church in the city. The beauty of the church’s statuary outside and inside says a lot about the money that the Church was able to raise in building this cathedral. As with many of the old European cathedrals, this building is truly awe inspiring.
Posted by Jonathan L at 4:30 AM