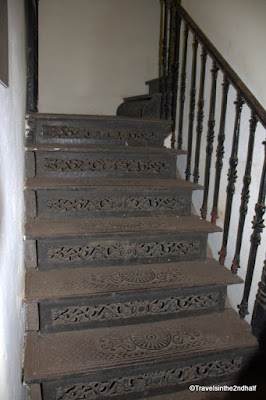 Our tour guide, Andy, stopped and told us to wait while he went into a jewelry store on Calle San Francisco in Old San Juan. A few minutes later he came out with the key to an apartment building across the street. He opened the creaky gate and, as we looked up the steep stairway, said “It’s worth the climb.”

San Juan, Puerto Rico, is one of the oldest European cities in the Americas, and its buildings are a unique collection of Spanish colonial architecture. It is so unique that it was named a UNESCO World Heritage Site in 1983. Unfortunately a large number of these treasures have been allowed to deteriorate over the years. The Puerto Rico Historic Building Drawing Society (PRHBDS) is working hard to educate people and help turn this tide.

The PRHBDS is an organization of professionals including architects, urban planners, engineers and educators that has a goal of promoting and educating the population on Puerto Rico’s historic environment. They work hard to make sure that its past is researched, understood and preserved. It maintains a library of architectural drawings, historic photographs and information about over 1200 buildings around the island. They also run educational tours that highlight that history and architecture.


I had the chance to sit with Andy Rivera, the founder and president of the PRHBDS. The Society was founded in 2001. Today its eight members carry on their mission of education, explaining and showing off the history and architecture of Puerto Rico.

“The architectural details found in Old San Juan and Ponce are not found in all parts of island. Smaller towns have demolished a lot of their old buildings.”


But Andy is optimistic.

“People’s views of the old buildings have changed. Today many are fixing up the older houses, taking advantage of the older technologies and ways of dealing with Caribbean heat and rain, while mixing in newer methods and materials”

Andy also pointed out that there has been a change in the outlook of companies that are developing properties in Old San Juan and other places around the island. The government and some developers have begun to recognize the value of maintaining the architectural history and are learning how to integrate old and new while rebuilding properties.

Andy’s biggest concern in the redevelopment of Old San Juan is maintaining the balance of the commercial, tourist and residential nature of the area.


“Old San Juan must keep its character as a living city and not become an artificial tourist destination.”

He believes that there must be a master plan that has a place for all of its history, moneyed and poor, from La Fortelza -the Governor’s Palace to La Perla.

To build the awareness of the patrimony of Old San Juan, Andy and the other members of the PRHBDS lead walking tours. They take groups of people around the old city to view its history. For a minimal cost (usually $10), which goes to fund this non-profit organization, they offer two-hour educational walks that give an in depth look at the history of the buildings in the area, and because they have an educational mission they have access to buildings that other tours can’t enter.  While most of their tours are in Spanish, they do offer some in English, and the tour guides I had were bilingual and happy to help me keep up to speed. 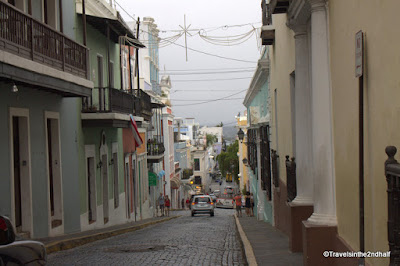 I took three tours with PRHBDS, one to look at examples stained glass windows in Old San Juan, one to look at soles truncus, the traditional wood ventilation screens over the doorways, and one in the nearby town of Rio Piedras and on the campus of University of Puerto Rico. Come back next week for my tour of the Stained Glass Windows of Old San Juan.

Taking the Tours - You can find the complete schedule of tours offered by the Puerto Rico Historic Building Drawing Society on the Facebook page.