For those who are up of their religious history, Palermo is an interesting city. It has not one, but two major cathedrals. Yes, one of them is technically in the town of Monreale, but both were built with intention of being the headquarters of the diocese in the Palermo region. How did this happen? Well, here is the story.

It all begins with the Saracen invasion of the 9th century. At that time the town of Palermo was the center of trade in northwest Sicily. This didn’t change, but the control of the town switched from Catholic to Muslim. And it stayed that way for around two hundred years. During this period, the archbishop of Palermo was forced to live outside the city walls in the town of Monreale.

Then in 1072, the crusades, led by an Anglo-Norman army, brought control of Palermo back to the Christians. The seat of the Church moved back into Palermo. And here is where the competition began.

The Norman Cathedral of Monreale 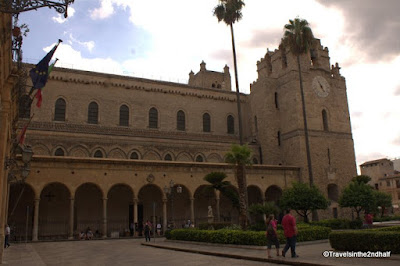 In the year 1172 King William II of Sicily ordered the construction of a new cathedral. Legend has it that fell asleep while hunting in the forest of Monreale and dreamt that he would find a treasure there. So he had his men dig up the forest, and low and behold, a treasure he did find. He dedicated this money to start construction on a cathedral in Monreale. William II hired the best craftsmen and his designers created on the most beautiful church interiors in the world.

The building is 102 meters long and it is divided into three sections, the nave, the choir and the sanctuary. The interior of the church is covered with extensive gold mosaics. The mosaics start at a height of about ten feel, and cover the walls and the ceiling. These works of art tell the stories of the old and new testaments of the bible. 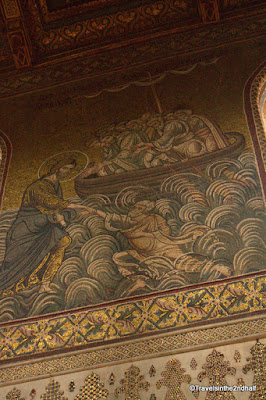 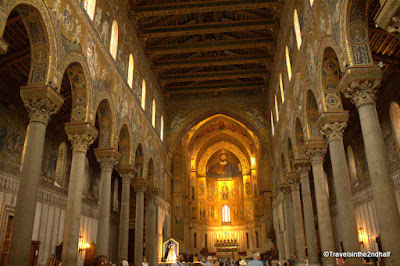 The nave is divided into three sections but two rows of columns. Each columns individually decorated, and no two are alike. The sanctuary is also divided into three sections, with the altar in the center and entrances to two chapels on either side. Above the altar is a massive mosaic with the face of Jesus looking down on the proceedings and parishioners. In the center is the choir, which is flanked on both sides by the pipes of the cathedrals massive organ. Behind the pipes, on the south side of the Cathedral are the tombs of King William I and King William II of Sicily.

The Cathedral of Palermo

With the king building this beautiful cathedral in Monreale, why, you might ask, would anyone want to build another cathedral just 5 Km away? Well, King William II was Sicilian, and the Archbishop of Palermo was Anglo-Norman, and while he was loyal to the king, he had his own view of where the power of the church should sit. This was especially true given the fact that the Saracens had torn down the original cathedral, which had been dedicated by Pope Gregory I, and built a mosque on its site. So Archbishop Walter Ophamil had the mosque torn down, and began construction of a new cathedral. He was going to reclaim that space for the Catholic Church.

To me, the beauty of this building is its exterior. The original building was erected in 1185, but there were additions over the next 400 or so years. This has created a very complex look to the edifice. While there is no one style, the different architects did a fantastic job at making sure that these disparate sections blended together to make a whole that exceeds the sum of its parts. 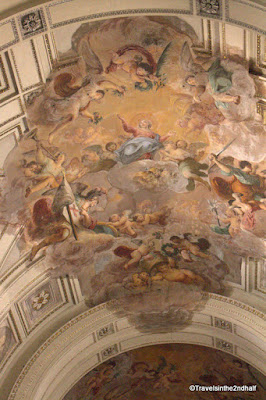 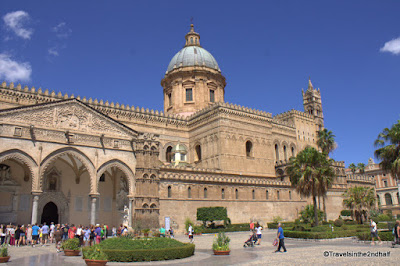 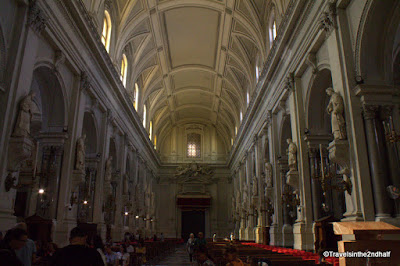 So there you have it. Two magnificent cathedrals, built at the same time, less than 5 Km apart. Both are worth seeing when you come to Sicily.

Getting There:
The Palermo Cathedral is at the southern end of Via Vitorrio Emmanuel III, near the Porto Nouvo. The free jitney that runs in the old section of town stops about 25m from the church.

The Monreale Cathedral is in Monreale. The #389P goes from Piazza Indipendenza to to Monreale. It stops about 400m below the church on the main road into town. Also all of the Hop On-Hop Off bus tours have a trip to the cathedral at least once a day.