Taking a tour to Chichén Itzá 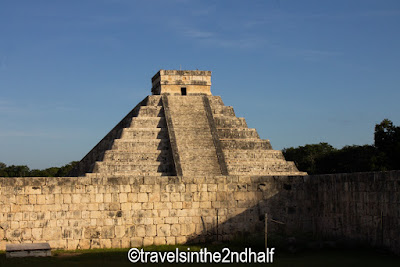 Visiting the coast of the Yucatan Peninsula without taking the time to visit one of the Mayan ruins in the seems to be a waste of a trip. So, on a recent trip to the island of Cozumel, I decided to take a full day trip to Chichén Itzá, the largest ruins in the area.

There are many ways to visit the ruins. Since I was taking the trip on my own, I decided to take an organized tour, rather than renting a car. I went to the tour desk at the Casa Mexicana Hotel, where the very helpful young lady made all of the arrangements. The biggest issue for me was that the tour started in Playa del Carmen, twelve miles across the water from Cozumel. Luckily, they ferry service begins very early, so I set my alarm for 6 AM to catch the first ferry of the day at 7, and I was on my way.

When I arrived in Playa del Carmen I hit a minor snag. It turned out that that hotel booked my reservation with a facilitator who works with several tour companies. The representative then had to call around and figure out which company had room for me. This meant I had a wait of about 30 minutes before a representative came and escorted me to the bus, about a half mile away. Then I found out that, while my bus was going to Chichén Itzá, many of the passengers were not. So, after driving for about 30 minutes, we pulled into a rest stop where there were half a dozen busses. Passengers left my bus, and others got on, and, finally we were on our way. 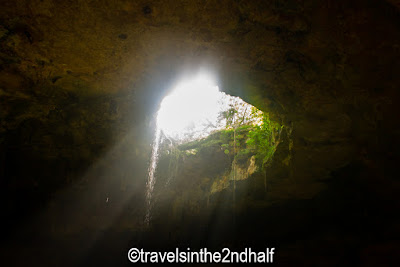 After an almost two hour drive from the “grand exchange” of passengers our first stop was Cenote Hubiku, outside the town of Temozón.. A cenote is an underground lake. It forms when an underground river has eroded the limestone that makes up the Yucatan Peninsula. A sink hole forms that leaves the lake open to the air above. Cenotes were often the main source of water for Mayan villages. Hubiku is set up for all of bus loads of tourists who pass through every day. After getting a pitch to buy a keepsake of your name in Mayan hieroglyphics, you walk down a path to the cenote. There is a locker room to change into a bathing suit, and to shower and change after your swim. The entrance is a well-developed stairway (about 100 steps) and there is a place to rent a locker and flotation vest inside the cave.

The Cenote is beautiful, almost other worldly. It is a large cave that is filled with a lake that is about 50 yards wide several hundred feet deep. The cave is lit through hole in its roof, and the rays of light stream across expanse. The water is clear and cool and wonder to swim in. If you don’t want to swim, there are several platforms you can use to wade into the water.

After taking a swim, lunch was served in a large dinning room. It was an extensive buffet with options of beef, chicken, salad and vegetables. The food is very tasty and the line moves quickly. The lunch comes with entertainment, as there are dancers who perform some traditional local dances. There are several souvenir shops and kiosks, and a tequila “museum”, in other words, lots of ways to spend money. Then it was for the hour-long ride to Chichén Itzá. 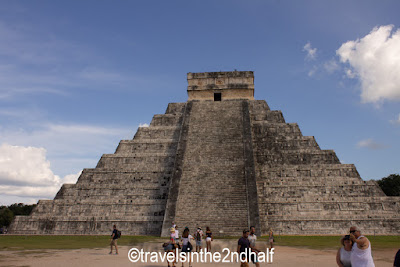 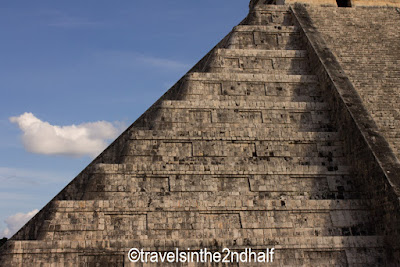 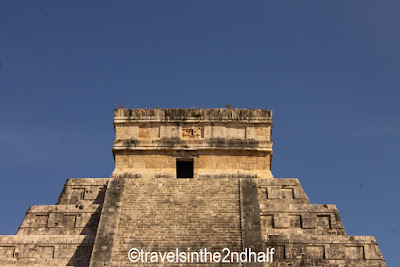 Chichén Itzá was one of the largest Mayan cities. It dates back to around 600 CE. The area that is open to the public was the center of religious ceremonies for the thousand or so years that the Mayan empire controlled the area. At the center of the ruins, and really the main attraction, is the Temple of Kukulkan (called El Castillo by the Spanish). There are ruins and old buildings that don’t live up to the hype (I am talking to you Leaning Tower of Pisa), but the Temple of Kukulkan is not one. This pyramid surpassed my expectations. At 30 m tall and 55 m on a side, this pyramid sits in the middle of open space, and it commands attention everywhere around it. Its structure is 9 perfect squares, one on top of the other. The sides are perfectly aligned so that on the vernal and autumnal equinoxes the setting sun forms shadows that look like a feathered snake crawling up the side of the temple. Its shape also creates an echo when a group claps together that sounds like a barking dog. 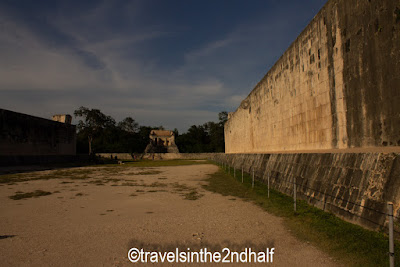 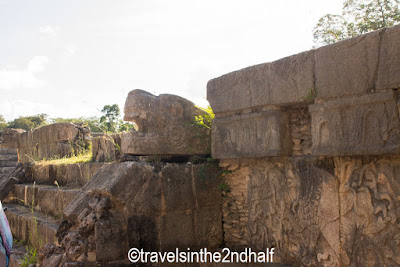 Our bus tour handed our group off to a local tour guide, who actually was from LA, but had worked for many years on the excavation and restoration of Chichén Itzá. After spend a most interesting hour discussing the Temple, its history and significance, he led us around the Tzomplanti (Platform of Eagles and Tigers), to the Juego de Pelota. This is the giant ball court, where games were played as part of religious celebrations. The goal was for a team to pass a ball, without using their hands, through a stone ring placed about 6 meters (20 feet) above the field. Standing in the middle of the field, you get a sense of what it must have been like to be a player. Can you imagine the stands on either side of the field filled with spectators and royal boxes occupied? 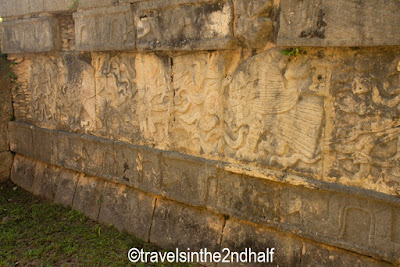 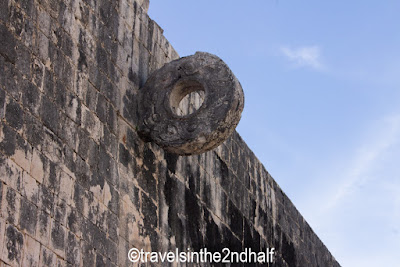 There are a few things that you should know before you visit Chichén Itzá. First, it is hot. While there is shade around the edge of the field, the temples are out in the open, and to spend time near them you will be out in the sun. Second, you can no longer climb the temples. You will have to admire them from ground level. Finally, you enter the site through a modern building. Here you will find modern toilet facilities, state approved souvenir shops and even a restaurant and other food vendors. When you leave the building to visit the temples, the path is lined with dozens and dozens of local people selling t-shirts, statuettes, jewelry or other souvenirs. The operative word here is “buyer beware.” Your money would be helping the local economy, but there are no guarantees as to the quality or reliability of the goods. 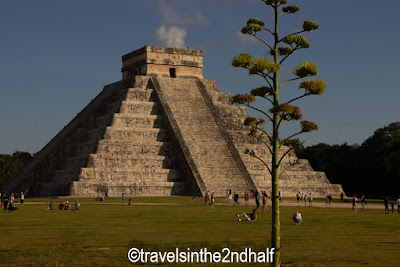 The last stop of our tour was in the town of Valladolid.  This a colonial city with a beautiful Plaza Central. Unfortunately, due to the fact that several of our tour members were extremely late in returning to the bus at the cenote, we only had about thirty minutes here. Just enough time to grab a quick snack before heading back to Playa del Carmen. The bus dropped me near the ferry terminal, where I waited for the boat back to Cozumel.

The tour cost me about $75. And it is a group tour, which for some people is real turn off. If you choose to take the tour, you WILL make all three stops in some order or another, although the cenote will be at lunch time. You will be part of a group of about 50 people and have to deal with all that that implies. But if you don’t want to rent a car, drive on your own and find a guide who speaks your language at Chichén Itzá, this is the way to go. You won’t have as much time at any one place as you would like, but you will get to see the highlights. All in all, I enjoyed the day. I would have liked more time at Chichén Itzá and at Valladolid. I saw more than I would have on my own, and it cost less than I would have had to spend alone. So yes, the tour is something I would recommend.