Who doesn’t love a trip to the shore? The sun is shining. The sand is soft. And the water, well, what is better than a cool dip on a hot summer day? But, what is it like to visit the shore during the winter? I decided to find out. So, on the first weekend of March, I drove from New York City to Norfolk, Virginia to explore the shore.

My first stop was Asbury Park, New Jersey. Asbury Park was founded as a residential resort in 1871. It became a summer destination with the development of the New York and Long Branch Railroad in 1880.  During the 1920’s two iconic Beaux Arts buildings were constructed along the beachfront. The Asbury Park Casino and Carousel House and the Convention Hall with the Paramount Theater. They are still standing and in operation today, so I chose them to be the bookends of my exploration of Asbury Park’s beach. This 0.5-mile walk epitomizes the town even in the dead of winter. In between these two classic buildings you will find the things that bring visitors to Asbury Park. The beach and boardwalk are beautiful. You will also find two famous venues that have supported local musicians for decades. The Stone Pony Bar, which gave us Bruce Springsteen and the E Street Band, and The Wonder Bar, where Tillie still welcomes visitors and musicians alike.  On a cold Friday morning, the day after a snow storm hit the northeast, the boardwalk was almost deserted. The only people out seemed to those locals who were getting businesses ready, either for the night’s entertainment, or the upcoming summer crowds.


My next stop – Atlantic City. Once known as “The World’s Playground,” Atlantic City’s boardwalk has been a destination since the 1880’s. My parents would take us there for a couple of days every summer when I was growing up. It had a huge beach, and it offered two piers with amusement rides – The Million Dollar Pier and most famously, The Steel Pier. The Steel Pier is 300 meters long and offered amusement rides and two famous shows. One was a performance of divers at the deep end of the pier. They would carry out high diving acrobatics at the deep end of the pier, and their show would end with the world famous High Diving Horse. The other show was Tony Grant’s “Stars of Tomorrow.” Children, aged 4-19 could audition each week to be in the show. If you remember the movie Beaches, Mayim Bialik played a young CC Bloom performing in this show. The boardwalk was lined with arcades, stores, fast food joints, and most famously salt water taffy shops. It was the kind of place that my parents could send out two boys, age 11 and 9 with ten dollars each and know that we would have a great time, and be safe.


Today, Atlantic City is the center if gambling on the East Coast. A dozen casinos take up all of the oxygen and, while Steel Pier and its rival The Playground Pier (formally the Million Dollar Pier) are still there, people come for the casinos. That meant that, even on a cold March day, it was business as usual. There were crowds on the Boardwalk and stores were open. But the feel of boardwalk had changed. It was not really family friendly any more. The stores were almost all tee-shirt shops and other tourist traps, the same goods in every doorway. There are still people who will drive you along the boardwalk in a wicker pedicab, but they seemed more desperate for work than I remember. And the boardwalk now has video advertisements and a musical sound system every 5 meters or so. There is no escape from the commercial onslaught trying to get you spend the money that you didn’t lose in the casinos. Also, in response to the damage caused by Superstorm Sandy in 2012, the city has piled up sand dunes in between the beach and the boardwalk. While this might protect against future flooding, it has ruined the view. You can no longer stand on the boardwalk and look out at the vast beach towards the Atlantic. Instead there are now 15-foot tall dunes that have to be crossed, cutting off the city from the sand, and making the boardwalk feel like a tunnel between them and the buildings.

My last stop on the first day of the exploration was Cape May, New Jersey. Cape May sits at the southern tip of New Jersey, along the mouth of the Delaware Bay. It is one of the country’s oldest vacation resorts, hosting visitors as far back as the mid-1700’s. In 1816, Congress Hall opened as a boarding house. While the original structure burned down in Cape May’s Great Fire of 1878, it was rebuilt along with most of the center of town. That is when Cape May gained its signature Victorian Houses. Congress Hall still anchors the beachfront, but modern hotels, resorts and condos have sprung up around it.
When I visited, Cape May was just waking up from its winter hibernation. Many stores and restaurants were still closed for the season, and on a Friday night, there was a sleepy feel along Beach Ave. The seawall was mostly empty as sundown neared. I had trouble finding a restaurant open for dinner. I ended up at the C-View Inn, a sports bar with decent food and prices, but away from the beach front, closer to where the year-rounders live. 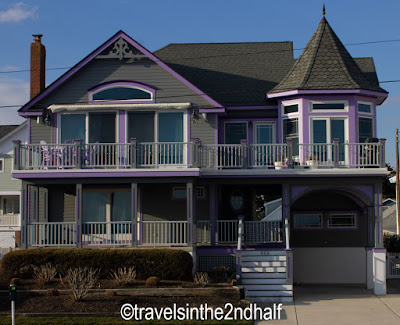 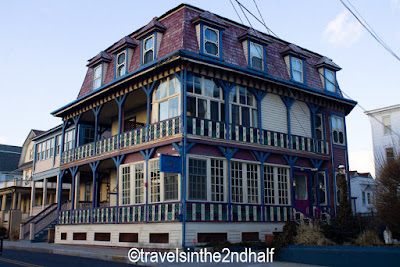 Each of the three towns I visited offered a different view of the Jersey Shore in Winter. What they all had in common was beauty that the crowds hide during the summer months. The empty beaches are a throw back to a time before the Jersey Shore became a destination for so many people. Today, the crowds in the summer can make it difficult to enjoy, but, coming down off season can be an enjoyable trip, even if you might have to go a little farther to find a place to eat or shop. Having the beach and boardwalk to yourself offers a chance to reflect and to enjoy nature in a way that you miss during the high season.

Getting There:
The Garden State Parkway (toll road) is the main N/S highway along the Jersey Shore. It runs about 10 miles inland from the ocean. All of the directions are from the GSP.

Asbury Park – Exit onto NJ Route 66 eastbound. Route 66 becomes Asbury Ave, which will take you right to the beach.

Atlantic City - Exit on to either U.S. 30 or the Atlantic City Expressway east bound. They will each take into the city. Follow the signs to the beach.

Cape May  - The GSP ends just north of town. It becomes NJ route 109, southbound. Stay on 109 (Lafayette St.) until it ends. Turn right onto Jackson St, which ends at Beach St.
Posted by Jonathan L at 5:00 AM