The Library of Congress is an underestimated treasure 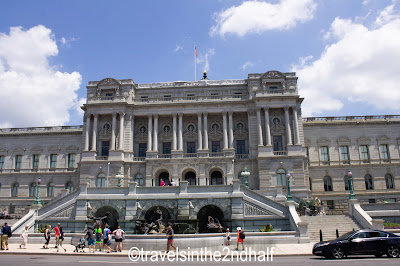 Most countries have a “National Library.” While the United States does not have a designated one, the Library of Congress serves that role. It is the official repository of printed material and so much more for the country.

Officially the Library of Congress is the research library for the legislative branch of the government. It was established by John Adams in 1800. The library and its collection were destroyed when the British burned Washington DC during the War of 1812. In 1814, Thomas Jefferson offered to sell his collection of over six thousand books to reestablish the libraries collection. By 1897, when the library moved from the capitol building to its new home, it comprised over 840,000 books. Today, the Library of Congress occupies three buildings on Capitol Hill. The Thomas Jefferson Building was built in 1897, is on First street SE, across from the U.S. Capitol, and is the one that most people associate with the library. The John Adams Building is behind the Jefferson and opened in 1939. Finally, the James Madison Building, built in 1976, sits across Independence Ave. There is also the Packard Campus for Audio-Visual Conservation, in Culpepper, VA. The library is open to everyone. Anybody can come and get a Library of Congress Reader’s card and have access to the entire collection. But remember, this library is a research institution, and all materials must stay in the buildings.
Start your visit in the Jefferson building. It was built in the 1890’s, at a time when American architects saw their job as celebrating cultural nationalism. The Beaux-Arts facade includes busts Ralph Waldo Emerson, Washington Irving, Goethe, Benjamin Franklin, and Nathaniel Hawthorne Sr. At street level is the Neptune Fountain, modeled after the Trevi Fountain in Rome. When pass through security into the main entrance hall, it is almost overwhelming. This is one of the most opulent government buildings I have ever seen. The walls and ceiling are covered with murals. They are historical and allegorical. Truthfully, between the crowds and distance I had to stand away from many of them, my camera was inadequate for the task.

Once you have spent some time enjoying the art work and visiting the Guttenberg Bible, head to one of the several galleries on the second floor. My love of cartography drew me to the Map Exhibition space where there were several maps drawn at the formation of the United States. The second floor is also where you can gain entrance to the balcony over the Main Reading Room. Climb the stairs, past the Minerva mosaic, and enter a space about 30 ft (10 m) above the floor of one of the beautiful library rooms in the world. This is the only place from which you can take its picture.

Travel down to the ground floor, where there are several more exhibition spaces. One is the Bob Hope gallery. This tribute to one of the most famous American comics includes an exploration of comedy through the years, looking at the cultural and political role of stand-up, radio and television comedies and comedians. You will also find the Graphic Arts Galleries, which offer exhibitions of drawings and cartoons. The hallways of the lower level, color coded for location, are lined with glass display cases that are used to show historical photos from the different departments housed in this area.

If you choose, you may walk to the Reader Registration Room (you have to pass through the ground floor to the back of the building, and then take the elevator up to the first floor) and register for a Library of Congress Readers Card. This grants you access to the materials in the library, and also entry to the several reading rooms in the buildings. Most famous is the Main Reading Room. This majestic room sits under the dome of the building, and is a rival to the British Library. But there are other room dedicated to certain specialties. For example, there is the Hispanic Reading room, home to books from and about the Iberian Peninsula and Latin America. Its entrance way is lined with beautiful murals by Cândido Portinari, a Brazilian painter. They cover several themes involving the colonization of the Americas by Spain and Portugal.
The Library of Congress is often overlooked by visitors to Washington DC. This was my first visit, and I have been to DC many times, but it won’t be my last. 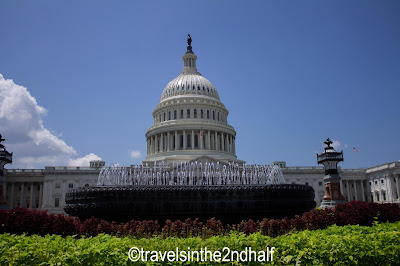 Getting There:
The Jefferson Building of the Library of Congress is located on 1st Street SE between Independence Ave and Constitution Ave. The nearest Metro stop is the Capitol South stop which is served by the Blue, Orange and Silver lines.
Posted by Jonathan L at 5:00 AM