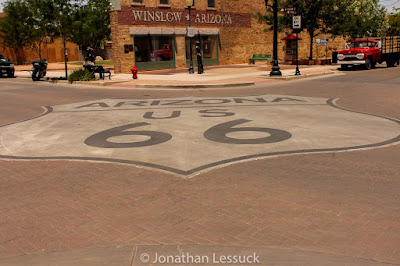 One problem with driving the old Route 66 is that, in some places, it has been completely swallowed up by the interstate. That is true as you cross the state of Arizona, especially between Flagstaff and Gallup New Mexico. That doesn’t mean that there isn’t still cool stuff. In 2014, I took a trip across the state, and open most of day in the area around Winslow AZ, where I found a lot to see. 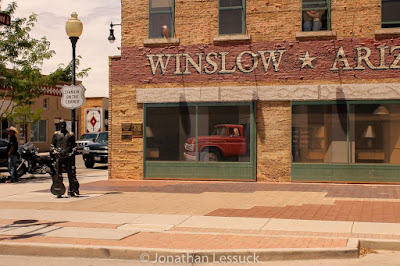 Winslow, Arizona was incorporated in 1900, primarily as a stop and fuel depot for Atchison, Topeka & Santa Fe Railroad. It became a main stop along Route 66 sitting about 130 miles west of Gallup NM, and 220 miles east of Kingman AZ. The La Posada hotel in town was built as a “Harvey House,” and the town served as a full service station for steam engines in the early 20th century. Today, Winslow is probably best know from the song “Taking it Easy” by the Eagles, which includes the line “Standing on a corner in Winslow, Arizona.” A corner in the center of town has been made into a tribute to that song. 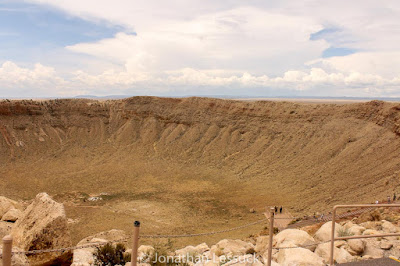 If you travel 18 miles west along I-40 and 6 miles south along Meteor Crater Road, you will get to one of only 30 clearly identifiable meteor craters in the United States, at Meteor Crater. The crater came to the attention of scientists at the end of the 19th century, as European Americans began to carefully survey the area. In 1903, Daniel Barringer, a mining engineer, was the first person to posit that the crater was made by a meteor impact. He placed a claim on the area around it, and began to develop the area as a tourist attraction. By 1929, scientists accepted the theory that it was, in fact made by a meteor, mostly due to the finding of many meteor fragments in the surrounding desert. 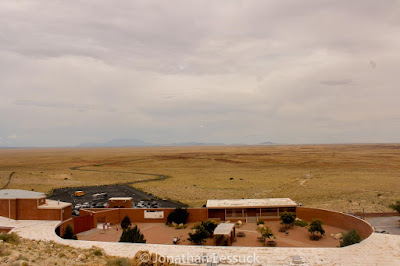 Meteor Crater is 3900 feet in diameter, and 560 deep at its center. The wall around the crater rises 149 feet above the Arizona plains, and looms in the distance as you drive up to visitor center’s parking lot. The Meteor Crater is still owned by the Berringer Family, and they have created a wonderful collecting of space memorabilia and scientific displays on astrogeology. The center piece is a 1400 pound meteorite found nearby. There are several viewing platforms inside the crater, from where you can look down into the crater. 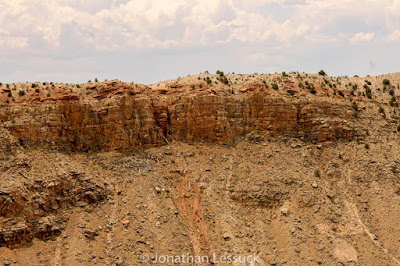 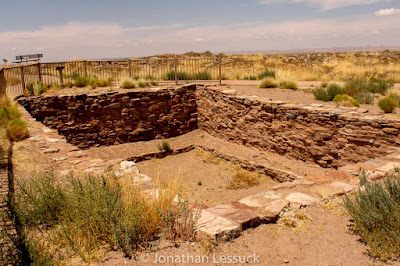 Around 800 years ago, the area of eastern Arizona was settled by ancestors of the Hopi and Pueblo peoples. Today, the remains of several of their towns are left, and one of them is at Homol’ovi State Park, just a few miles east of Winslow. The settlement is on the fertile flood plain of the Little Colorado River. When you visit you will find the foundations of many of the structures that were built around 1200 AD. I even found some shards of broken pottery from the time. Recently, the name of the park was changed to remove the term “ruins” at the request of the Hopi as their belief is that the area is still spiritually active. It is a fascinating walk through history. 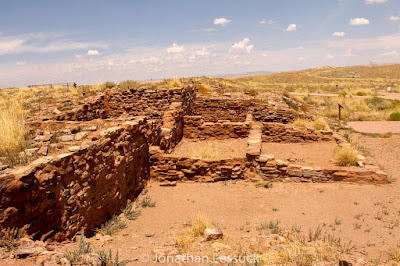 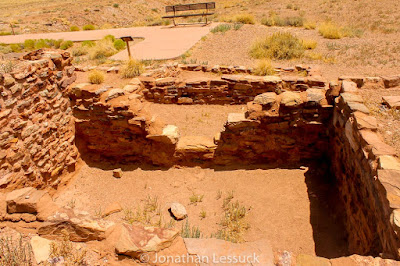 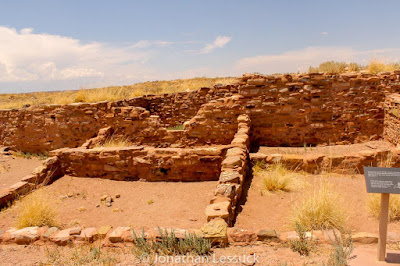 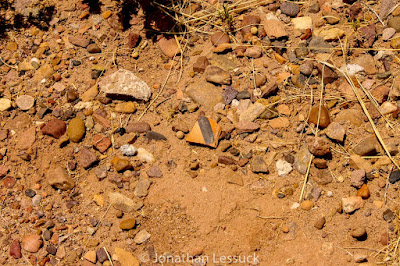 Homol’ovi State Park is open 7 days/week. Fees $7/car with up to 4 people. $3/person or bicycle