Yes, there is all of the hype of The Great Wall being one of the Seven Wonders of the World. But The Great Wall out does the hype. It is awe inspiring. Built between 1360 and 1650 AD it was never effective at keeping out invaders, it serves as a reminder of what the power of a system that is built on slavery can wield.

The section of the Great Wall at JuYong Pass is a somewhat circular portion of the wall that is about a 5 hour walk to complete. It travels up and down the ridges of of one of the steepest passes along the wall, leading to some breath-taking views.

Coming from Beijing you will most likely approach The Great Wall from the south. As you do, the wall will start to peek out along the ridge top: 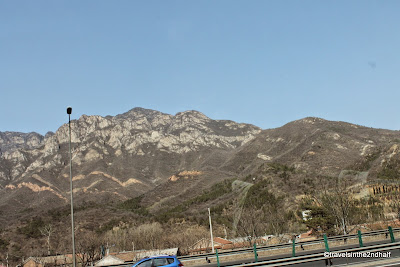 The thing is, even from the road, it is hard to get a feel for just how big the Great Wall is. This part of the Wall is about 20 m tall and 10 m wide.


The tough part about climbing the Wall is that is sooooooo steep.


To me, the scariest thing about climbing the Great Wall was coming back down to my starting point. The stairs are not a regular shape. You have one that is 3-4 inches tall with the next one being 15 inches tall. But for me the hardest part was that, while there was a banister to hold on to, it was often only 2 feet above the steps. this meant that everyone trying to use it was bent over holding on.

When I travel I try not to be a tourist. I work hard to understand the history of the places I visit. I wander through neighborhoods away from the main drag, and look for restaurants and stores where locals eat and shop. But that doesn't mean that there are times where I have to bite the bullet. This trip has been one of those times. That being said, I was never disappointed in Beijing. All of the "tourist" places lived up to their reputations and many exceeded them.

So yeah, some smart alleck is going to ask you if the Great Wall was worth it, it IS just a wall after all. But having traveled half way around the world, and not going to climb it seems ridiculous, and truth be told, it really is a wonder to behold.

Next up - some places off of the normal tourist trek in Beijing.