Sandy Hook, New Jersey is part of the Gateway National Recreation Area. It sits at the very northern end of the chain of barrier islands that make up the "Jersey Shore." It is a multi-use park with ocean and bay activities along with the historic buildings of Fort Hancock and Sandy Hook Lighthouse.

Sandy Hook's position at the southern end of NY harbor gives it great maritime importance. Before the ability to dredge a major channel was developed the main shipping channel into NYC passed near Sandy Hook. As a result the lighthouse was built on Sandy Hook in 1764. It is the oldest surviving lighthouse in the United States. It is still a functioning lighthouse, maintained by the U.S. Coastguard.

The importance of Sandy Hook is demonstrated by the fact that during the Revolutionary War the British captured and held it in order to control shipping into New York City. During the War of 1812 the United States built a wooden fort, Fort Gates, on this site. In 1859 a more permanent for was built - Fort Sandy Hook, which became the home to the New York's 10th Volunteer Infantry, the precursor to the 10th Infantry now based at Fort Drum NY.

During the 1890's a new set of fortified mortar batteries were built to protect the channel. These housed 12-inch guns, and the army commissioned the area as Fort Hancock. This included an artillery proving ground that was built in 1874. Fort Hancock served as a military base until it was decommissioned in 1974. At its peak during WW II it housed over 7,000 troops including WACS and it was an integrated base several years before President Truman's 1947 order integrating the entire U.S. military. During the Cold War Fort Hancock served as part of the Air Defense for NYC and and housed a NIKE missile base.

Today most of the buildings of Fort Hancock are still standing, although they are not open to the public. These include "Officer's Row," Many of Enlisted Men's barracks and mess halls, and many service buildings, now use by the U.S. Park Service.

Of course, the big draw to Sandy Hook are the beaches. Sandy Hook has 7 miles of ocean and bay beaches. While they suffered major damage during Hurricane Sandy, the bathing and changing facilities have been completely rebuilt. It is really a beautiful place to come and enjoy the sun and surf. There are also paddle boards and kayaks available for rent on the bay side near the Sandy Hook Visitor's Center. See map here. 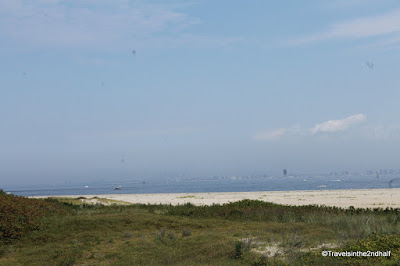 Sandy Hook is about a 60 mile drive from NYC. This takes about 1.5-2 hours, but can take a lot longer on a summer weekend. There is a $20/vehicle fee to enter the National Recreation Area. There is also ferry service from Manhattan to Sandy Hook for $46 round trip.