I am a born and bred New Yorker, and I drive in the city when I need to, regardless of the traffic. I have been stuck in “Summer Friday” traffic and “pre-Christmas Traffic.” But I have never seen traffic as bad as I witnessed in Lima Peru. In fact, it was this traffic that caused The Amazing Ms D. and me to do something that we don’t usually do on cruises, we paid for an NCL tour. Even though we both speak Spanish, we were unsure about being able to hire a taxi for the day, and get back before the last bus back to the ship. This decision gave us both some really interesting sights and some frustrating scheduling.

One of the things that I really enjoy is seeing how people really live in the places we visit, and usually that involves going to local markets. Not craft markets, but every day food and clothes markets. One of the reasons that we chose this particular trip was that it promised a tour of a local market, and that was the Minka Market in Callao, a suburb of Lima. Listed as Peru’s only “Commercial City” this collection of over 1000 stores is both a mall with clothing stores, electronic stores, a mega food market and even a car dealership.

The food vendors are housed in four large buildings, one each for meat, fish, fruit and vegetables. Being only 15 years old, the market is very clean, easy to maneuver, very brightly lit with good ventilation. The vendors tend to specialize. For example, we stopped at a vendor who sold only bananas. Who knew that there were so many different kinds of bananas? Some sold only potatoes, or peppers. Walking around these stalls we were surrounded by local people doing their weekly shopping, and they were often as interested in these groups of tourists as we were in the food. 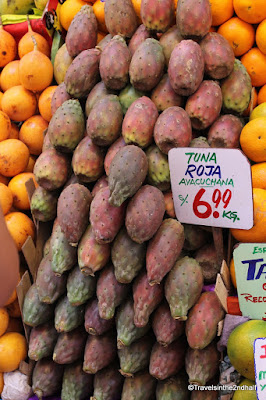 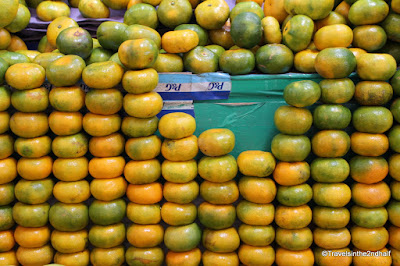 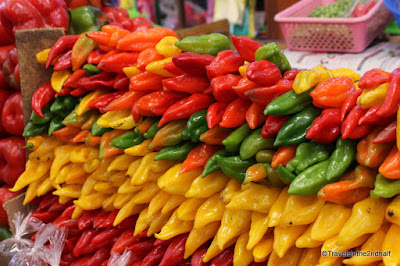 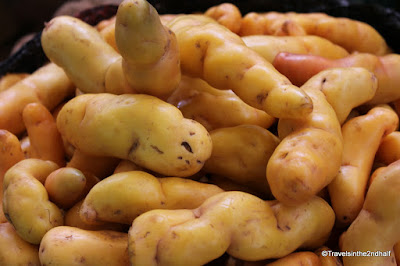 Lima, the capital of Peru, with a population of over 10 million people, is the second largest city in the Americas. With a population this large it has some of the worst traffic I have ever seen. It also has some of the most beautiful buildings. The city was founded in 1532 and by 1545 it was named home of the Viceroyalty of South America, and the control of all of Spain’s holdings in South America lay here. This meant that the colonial rulers of Lima had a lot of money to spend in building the city. There were several architectural features that stood out in our tour through the center of the city. First, the buildings around the plazas were designed to match. So each plaza has its own unified look and color theme, one was blue, another pink, and the Plaza de Armas was yellow. 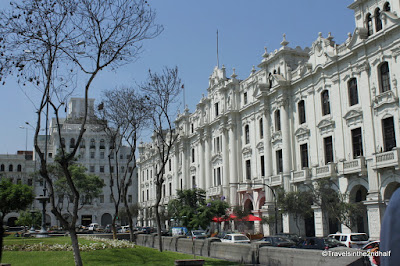 The other feature that was unique to Lima are the beautiful balconies. These enclosed balconies are made of cast iron or wood. The wood was imported from Panama and Costa Rica because that was easier than bringing it down from the Andes. The balconies are carved and hang out over the streets. Because of the scarcity of these materials these balconies were at once a show of fashion and wealth and indicated the high status of their owners. 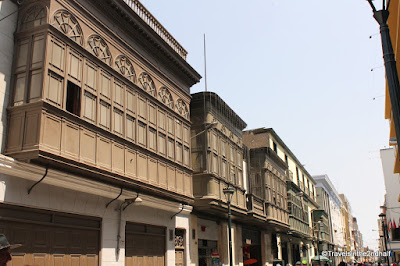 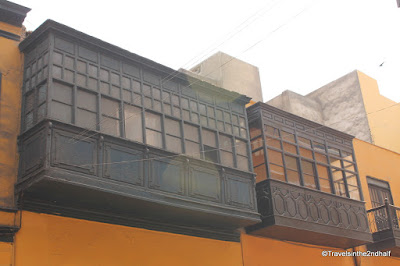 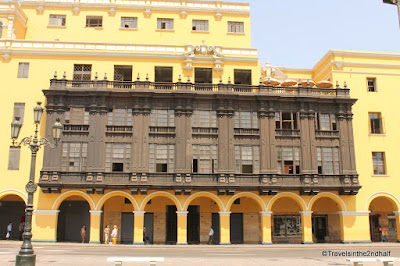 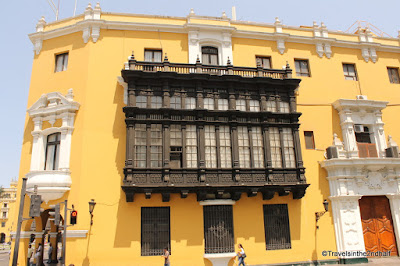 The Amazing Ms D, is addicted to local crafts anywhere we travel. Finally, our tour did stop at the “Inka Market.” This open market of artisans and tourist shops is extensive and has goods available for all pocketbooks. The problem for was being on the tour. Unfortunately, when we arrived we were told we had 25 minutes to shop. This was barely enough time to visit a few of the shops in the FIRST courtyard. And this is the down side to taking a tour instead going on your own. You are stuck with a schedule that is superimposed on your interests and needs, and you can’t change it.

So we left the tour to get lunch. Miraflores is a fancy neighborhood near the ocean. We were dropped off at the Larcomar Mall and went to Mangos Restaurant. This restaurant was suggested by our tour guide (a plus) and sat on the side of a cliff overlooking the Pacific. They offer a buffet, but we decided to order their signature Mango Ceviche. The food was excellent and the view was out of this world. I also tried Inca Kola, the “national drink” of Peru. It was kind of like Champagne Kola, although not quite as bubble-gummy. The price was reasonable, around $35 for the two of us. 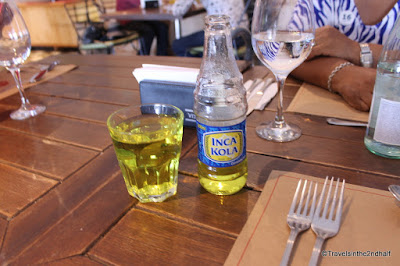 Lima is a complex, urban society that definitely requires a longer stay. We plan on going back and giving it the exploration it merits.