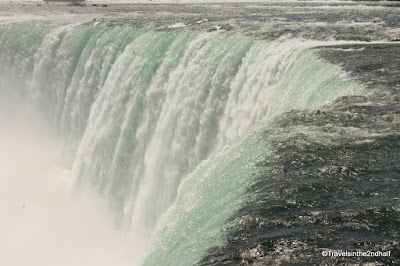 There are some destinations that spark this kind of discussion between The Amazing Ms D. and myself.
Ms D. - Are you really sure that you want to go there?
Me – It’s amazing.
Ms D. – But there will be huge crowds!
Me – It’s worth it!
Ms D. – But it is so touristy!
Me – Trust me, it’ll be great.
Niagara Falls is exactly that kind of destination. Crowded, touristy, hot, and so amazing that you put up with all of it.

For those who have never been, The Niagara Falls are three water falls in the Niagara River along the U.S./Canadian border. There are the Horseshoe Falls on the Canadian side and the American Falls and the Bridal Veil Falls on the U.S. side of the border. These are huge cascades, the Horseshoe Falls are 57m (188ft) tall and 790 m (2600ft) wide. The American Falls are about 30 m (100ft) tall and 320 m (1060 ft.) wide. Together they have the largest water flow of any set of falls in the world. But those are just numbers. These falls really have to be seen to be appreciated.

The Falls have been a tourist destination since the early 1800’s. Theodosia Burr Alston, Aaron Burr’s daughter, and her husband John Alston, visited on their honeymoon in 1801, the first recorded couple to do so. But tourism really took off after the Civil War, when the NY Central Railroad started to advertise the Falls as a prime destination. The first bridge across the falls was built in 1855. The Rainbow Bridge, built in 1941, is the closest to the tourist areas of both Niagara Falls NY and Niagara Falls ON. Further down river is the Whirlpool Rapids Bridge which is a conduit for cars, pedestrians and the Amtrak/Via Rail trains between New York City and Toronto.

The first decision to make is whether to visit the American or the Canadian side of the falls. To me, there is no real argument. The Canadian side has the best views, the prettiest park and most developed visitor’s facilities. Today Niagara Falls Ontario is more developed than Niagara Falls NY. It has many motels, hotels and restaurants. It also has lots to do for the family – wax museums, houses for horror, and other family attractions. Niagara Falls NY was like a forgotten town for many years, but it has seen more development recently and is starting to catch up to its Canadian counterpart. Of course it also has the biggest crowds, and what has to be the highest density of ways to spend your money north of Orlando FL. So do some research, you might save some money by finding a hotel on the U.S. side, and driving across every day. There is parking for $20CDN in the park, and a shuttle bus that will take you to anywhere you might want to go for $7.50CDN for a 24-hour pass. The shuttle bus, called WEGO, has several lines which connect all of the hotels and camp sites on the Canadian side with the main tourist sites and travel as far north as the Botanic Gardens and Butterfly Conservatory.  The main parking lot is near the large visitor’s center, right next to the Canadian Falls. The Canadian side has also spent a lot more to make its side more inviting with open landscaping for great views and facilities to make your visit more comfortable. I did notice major construction on Goat Island in Niagara Falls State Park, so soon there will be a U.S. visitor center worthy of the Falls.


Number one on my list what to do at Niagara Falls is to take a boat ride to the base of the falls. This is the Maid of the Mist on the American Side and Hornblower Niagara Cruises on the Canadian side. For about $18 US ($21 CDN) for adults. The boat will take you about as close to the base of the Horseshoe Falls as any sane person would want to be. It is on this trip that you will really feel the power of the falls. It is truly awe inspiring. The lines can be long, especially on the Canadian side, but they do move fairly quickly. One warning - you will get very wet on this boat ride. There is a small indoor area on the boat where you can minimize the effect of the spray. 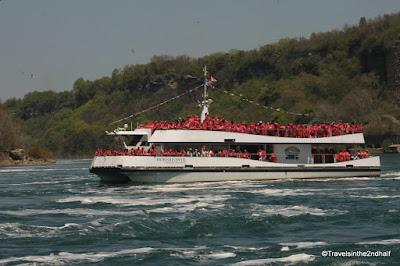 There are several ways to spend time at the bottom of or behind the falls. On the American side is the Cave of the Winds, which is behind the Bridal Veil Falls inside the Niagara Falls State Park. Here, there is an elevator that takes you down near the Niagara River, where you can walk along a wooden boardwalk and climb into the Cave of the Winds. On the Canadian side the is the Journey Behind the Falls. This set of tunnels have been dug out for about 100 yards behind the Horseshoe Falls. Here you can walk to within about 6 feet of the rushing water, and then come out to a platform alongside the falls.


We bought the Adventure Pass ($55CDN) which included entry to the Hornblower Cruise, Journey Behind the Falls, White Water Walk, a 2 day Shuttle Bus pass and several other entry fees and discounts. This gave us some significant savings and allowed us to book certain tickets in advance instead of having to wait in line.

Make sure that you take the time to walk along the promenade on the Canadian side of the Falls. This park give you the best views of both the American and Horseshoe Falls. It is THE place to take your pictures. Be warned, it gets very crowded by the middle of the afternoon, especially during the summer and on national holidays, so go early. 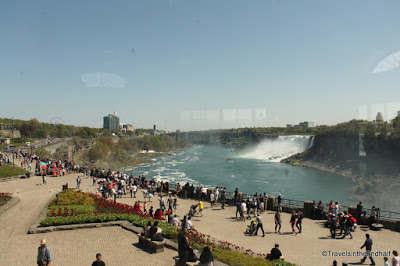 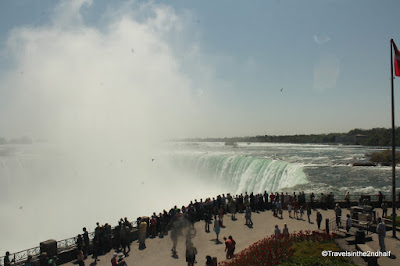 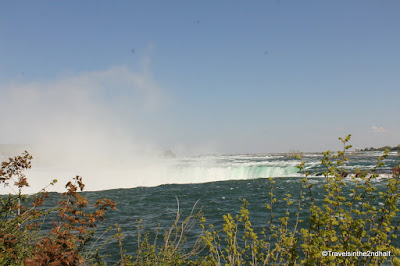 To summarize, GO TO NIAGARA FALLS. Plan for crowds. Bring you camera. Plan ahead. Be ready to be awed.