While Museum Island is home to the collection of Berlin’s Stadtmuseum, which covers the history of art from ancient times to the start of the 20th century, it is not the only place to see good art. But if your interests go into the 20th and 21st centuries, you will have to leave the Mitte and venture out into other parts of Berlin.

Southwest of The Tiergarten, near the Zoological Garden is the Kurfürstendam neighborhood, home to several excellent museums. I wrote about the Käthe Kollwitz Museum in an earlier blog post. Kollwitz was a German artist during the first half of the 1900’s whose work focused on the struggles of women, children and workers against oppression.
Nearby is the Amerika Haus-C/O Berlin. Amerika Haus was built in 1946 by the United States Military Command to house a library of American books at a time when Berlin’s cultural resources had not yet recovered from World War II. During the Cold War it was maintained by the United States government as an “American Reading Room” and a place for exhibitions, performances and conferences in the divided Berlin. In 2006, the United States embassy moved to its current home near the Brandenburg Gate, and, with the Soviet Union no longer in existence, the building was turned over to the city of Berlin. It sat empty until 2014, when the C/O Berlin foundation moved in and converted it into an exhibition space for photography.

I visited the Amerika Haus because, while returning from the Käthe Kollwitz Museum, 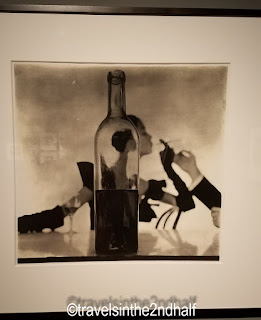 I saw posters advertising its exhibit celebrating the centennial of photographer Irving Penn’s (1917-2009) birth. Irving Penn (actor Sean Penn’s uncle) was one of Vogue Magazine’s primary photographers. He worked for the magazine starting in the 1940’s, and he was quickly given responsibility for shooting many of the portraits of celebrities and artists who were featured each month. On technique that intrigued me was his use of false walls. He would place his subject in between two walls that were placed close together. This tight space seemed to bring out a more personal side of the people Penn was photographing.


Kreuzberg
Another neighborhood with a wealth of museums and galleries is Kreuzberg. This area
was part of East Berlin, and after the wall came down, it became home to many artists. I came to Kreuzberg to visit the Berlinishe Galerie, one of Berlin’s best modern and contemporary art museums. Its permanent collection is represented in its exhibition – Art in Berlin 1880-1980. Filling the entire 2nd floor of the building, this is a comprehensive exhibit that presents paintings, sculpture and photographs produced in Berlin during that period.


The first floor houses to the museum’s temporary shows. When I visited, there were several different shows but the one that caught my eye was one of works by Eduardo Paolozzi(1924-2005). Paolozzi was a Scottish artist, who was considered as one of the originators of “POP ART”. He created collages made of, and in the style of magazine advertisements, and statues made of found objects.

There are several small museums near Potsdamer Platz. The two that I visited were right next to each other along Niederkirchnerstrasse. One is the Topography of Terror. It is built on the site of Gestapo Headquarters, which was destroyed during World War II. Wile I skipped the indoor museum, its outdoor exhibition fascinated me. In 1987 the basement of the building was excavated. These were the cells the Gestapo held prisoners in and used for torture. Today you can walk along a path through the ruins of these cells and observe a photographic history of the horrors of the Gestapo and the SS. While this path passes below street level, up above is the history of the Berlin Wall. The Wall ran along Niederkirchnerstrasse, and here, the section was left standing, so you can observe the slabs of concrete and the decorations that were added by local artists after 1989.

Next to this trip through the horrors of history is the Martin-Gropius-Bau, a museum dedicated to contemporary art and photography. This Neo-Renaissance building opened in 1886 as a museum of applied art. It was heavily damaged in during World War II and did not reopen until reconstruction finished in 1999. The exterior has been completely restored to its pre-war splendor. Inside there are modern galleries, built around its original two-story tall exhibition hall. During my visit there was an exhibit of films made by Cuban-American artist Ana Mendieta (1948-1984). She is best known for making female body shapes on the ground in nature, either digging them out, or by using natural objects.

When you visit Berlin make sure that you look beyond Museum Island. There are a lot of excellent museums that present a wide variety artists and art work. Get out and enjoy it.

Getting There:
Amerika Haus – Hardenbergstrasse 22. This is near the Bahnhof Zoologisher Garten train station. It is served by many subway and commuter rail lines. Admission €10/€6.

Berlinishe Galerie – Alte Jacobstrasse 124-128. The closest subway stop is Kochstrasse station on the U6 subway. Admission is €8.