Last week I wrote about Piñones and Loíza as places to visit for sun, sand and great food. However, these towns are also home to artisans and artists carrying on many Afro-Puertorican traditions. They are wonderful places to explore this aspect of the artistic history of the island.

C.O.P.I. –
The Corporacíon Piñones se Integra (C.O.P.I.) serves many roles in Piñones. Its headquarters, on Calle Arturo Schomburg, just east of bridge from Isla Verde, is a place where visitors can rent bicycles and kayaks to explore the beaches and mangrove forest of the area. After hurricanes Irma and Maria, C.O.P.I. was a base for the distribution of food and needed materials in the area, and as an advocate for the residents of the community.
It is also home to Majestad Negra, a folkloric dance company that specializes in bomba, a traditional Afro-Puertorican dance style. The music for bomba is provided by a group of drummers playing barriles, drums made from the wood of used barrels. Most of the drummers play a rhythm for the dance, but one, the primo plays in response to the movement of the dancer, forming a conversation, with the dancer leading, and the primo responding. C.O.P.I. also offers classes in drumming and dancing bomba on Saturday mornings, at 10 and 11 respectively.  DJ Junny, who runs the drumming class, also leads a taller, or workshop, that makes barriles by hand. If you want a one-of-a kind instrument, and you are willing to pay for this kind of craftmanship, stop by and see him.

Puerto Rico is home to many fine artists, and a number of them make this area their home.  Samuel Lind is one of them. Samuel was born and lives in the town of Loíza, where he maintains his studio. He works in many media, oil paint, statuary and prints. His work represents many aspects of his love for rural Puerto Rico, and his ties to his African roots. Many of his paintings show life in small towns in the early part of the 20th century. Another of his themes is the celebration of Bomba y Plena the traditional forms of dance and music. He also has created works that tie directly to the spiritual beliefs of the Africans enslaved on the island and their descendants. You can follow and contact Samuel through his facebook page, or call his studio (+1 787-876-1494) to make an appointment to visit and see, and maybe buy some of his work. Samuel is always ready to spend some time talking about his pieces, their history and meaning. 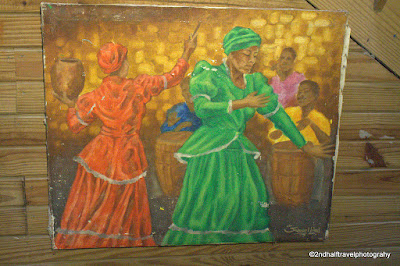 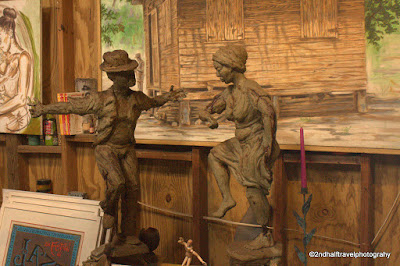 There is a long history, especially in Spain, of presenting the struggle of good vs evil in religious parades. One of those was the Festival of Santiago, which celebrates the expulsion of the Moors (presented as devils) from Spain. When that tradition was brought to Puerto Rico, Afro-Puertorican artisans were hired to create the masks used to represent the devils, called vejigantes. Today, the creation of vejigante masks in the traditional styles, are centered in the city of Ponce, for its carnival celebration, and in Loíza, for the celebration of Festival de Santiago.

In Loíza, the Ayala family, and their taller are the formost creators of vejigante masks, called caretas. The Loíza style of caretas are made from coconut shells with bamboo used for teeth and horns and they are painted in bright colors. While the historic connection of vejigantes is to demons and invaders, because they represent the Africans who were in Spain, they now have been given connections to the African heritage in Puerto Rico, and are celebrated in this community.

While you can find many caretas made for tourists in San Juan, come to Loíza for the real deal. The Ayala family sell its work from a store front on Route 187, just up the road from Samuel Lind’s Studio.

Getting There (from San Juan):
C.O.P.I. - travel east along route 26 to PR-187. Continue east on 187 past the Playa de Carolina, and cross the bridge into Piñones. The first right over the bridge is Calle Arturo Schomburg, and it leads into C.O.P.I.’s parking lot.

Samuel Lind and Taller Ayala  -
Choice 1 – Start as above to Route 187 and continue through Piñones to the town of Loíza. Follow the signs for Route 187.
Choice 2 – Take route 26 east to Route 3. Continue on Route 3 to the town of Canovanas. Take route 188 north until it meets with route 187. Follow route 187 north and then turn east, staying on route 187. Continue for about 4 KM (2.5 Miles). You will see the Batey de los Hermanos Ayala on your right. There is a road directly across the Ayala’s and Samuel Lind’s Studio is about 50 meters down this street.