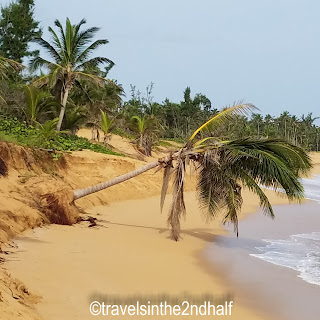 NOTE - As I was writing this post, the Puerto Rico Tourism Comapany (CTPR) the official governmental touristic agency, announced that they were not giving Piñones and Loíza "tourist area status" and will not provide funds to help develop the tourism industry in these two towns.

A year after Hurricanes Irma and Maria, Puerto Rico’s tourism industry has begun to recover. The tourist areas in San Juan are open for business, and most of the hotels and restaurants are back. But what is it like outside the metropolitan area? 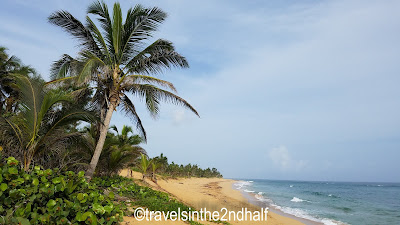 On a recent trip to Puerto Rico, The Amazing Ms. D and I spent time in the towns of Piñones and Loíza. These towns, northeast of San Juan are areas that are historically Afro-Boricua. In the 1600’s the Spanish ordered that African descendants who had escaped enslavement in the British Caribbean colonies were to be sent to this area for settlement. This kept them away from most of Puerto Rico’s enslaved populations, and placed them in an area where Spain’s defenses were weak. The hope was that, should the British invade, the former enslaved people in this area would fight vigorously to defend their freedom. In fact, that is exactly what happened. In 1797, while most of Spain’s Caribbean forces were on the Island of Hispañola, “protecting” Spain’s colony there from the from the revolution taking place in Haiti. The British took advantage of this and invaded Puerto Rico along the beaches of Piñones. About 3000 troops landed and were met by thousands of locals, most armed only with machetes. The fighting continued for two weeks, until the British, who were cut off from access to food and water, were forced to abandon the invasion.

Today, Piñones and Loíza are the heart of Afro-Boricua culture in the northeast coast of the island. They are home to a culinary, musical and artistic tradition that stretches back to Africa. It is a part of Puerto Rico that is worth exploring. Today we will start with Piñones, and next week, we will visit Loíza.

Piñones is a six-mile stretch of undeveloped beach and mangrove forest, that sits north and east of San Juan’s main airport. It is home to many Kioskos, food stands, that specialize in frituras and seafood. There are also two beach areas that tend to draw most of the people who are looking for sand and sun. One is Playa la Pocita, which is about 3 km east of the bridge leading into Piñones from Isla Verde. The draw here is a natural pool of very calm and relatively shallow water formed by rocks. Many families come here because it offers a safe place to swim, as there are no lifeguards anywhere in Piñones. On Saturday mornings this is even a water aerobics class held here. Three kilometers further east is Playa Vacia Telega. Sitting in a cove that offers protection from the rougher parts of the Atlantic Ocean in Isla Verde and Condado, beach goers can enjoy a day of sand and sun. Both of these areas have parking available, although there are no other facilities. If you want more privacy, just look for an opening along route 187, and pull in. The entire beach is public. Many people bring their lunch, water, hammocks and towels and drive up to the beach for the day. 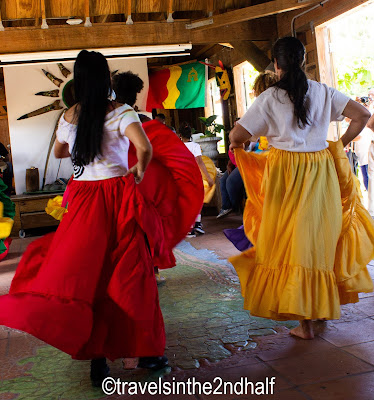 When you come to Piñones, stop at the Coporación Piñones se Integra (C.O.P.I.). This organization is located on Calle Arturo Shomburg, which is the first street on the right, just past the bridge from Isla Verde. Here you can rent a bicycle and ride the developed trail along the length of Piñones. If come at 10 AM on a Saturday, you can take a class on traditional African drumming, and stay for the 11 AM class on Bomba, a dance-form whose roots are in the enslaved Afro-Puertorican past. Bomba is the only dance that I know of where the dancer leads the musicians.

Eventually you will get want a bite to eat. You won’t find and white linen restaurants here. What you will find is fresh, delicious authentic Afro-Puertorican cuisine, served in an informal and friendly environment. Down home cooking at its best. I am going to recommend three of my favorites. El Burén de Doña Chita – At the eastern end of Playa la Pocita, across the road from the beach, are several kiosks with a parking area. The first one is El Burén de Doña Chita. This kiosk has a long history, although not originally in this spot. A burén is a traditional method of cooking made of a sheet of metal used as the cooking surface, usually heated by a wood fire. Doña Chita spent many decades in the town of Loíza, cooking over her burén. During the week she, and her family, would collect drift wood and prepare a masa made of yucca. On Sunday she would light the fire and cook tortillas de yucca, a delicious treat made from ground yucca, coconut milk, sugar, vanilla and butter. The mixture is wrapped in a banana leaf and cooked on the burén. Doña Chita worked for many years, putting her children through college. Today members of her family continue her tradition, having moved the burén to the beach front in Piñones. On Saturdays and Sundays, they sell the tortas de yucca, along with excellent frituras – alcapurias de jueyes (fried green bananas and yautia masa stuffed with crab meat), relleños (plantains stuffed with meat or crab), and other fried delights. 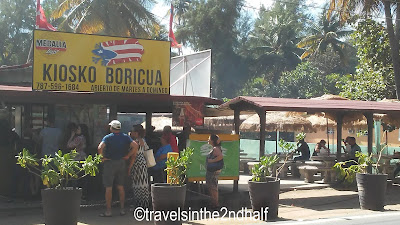 Kiosko El Boriqua -  Located at KM 8 on Route 187, this road side stand offers hot frituras, cold beer and an excellent arroz con jueyes. I suggest starting with their alcapurias stuffed with crab or beef, or a bacalaito (salt cod fritters). The highlight of the meal is the arroz con jueyes, a wonderful mixture of rice and crabmeat, from local blue crabs, made with homemade sofrito. It is a great choice for lunch or dinner. El Boriqua is open Tuesdays-Sundays, from 10 AM – 6 PM.

Kiosko La Comay -  Further east, right before you arrive at Playa Vacia Talega, you will find Kiosko la Comay. Another roadside stand with specialties in frituras and crabs, they also sell a dish they call arroz con jueyes. Unlike El Broiqua, theirs is closer to a different Puerto Rican speciality – salmorejo. Instead of mixing the rice and crab meat, they are prepared separately, the crabs in a red sauce, cooked with olives and capers. This lovely stew is then served over arroz con gandules (rice with pidgeon peas), a wonderful dish.

So if you want that “undeveloped” Caribbean beach experience, head to Piñones for sand, sun and great food.

Getting There:
From San Juan and Isla Verde. – Head east on Route 26 or Isla Verde Ave to Route 187. Take 187 between the edge of airport and the Isla Verde beach. You will cross a bridge, and that brings you into Piñones. Route 187 is the main road through Piñones, and can get crowded, especially on weekends, but everything is along it. You can also get there by bus from Isla Verde. Take the 45 bus along Avenida Isla Verde towards Loíza. The bus cost $0.75 per ride. I won’t vouch for its schedule but it is available.