The 2019 Holiday Train Show at the NY Botanical Gardens

Every winter, the Enid A. Haupt Conservatory at the New York Botanical Gardens is transformed into a miniature version of many well known buildings of New York City, complete with trains running in and amongst them. This year, the 27th Annual Holiday Train Show (which ran from November through the end of January), was, again a wonderful and fantastical exploration of the historic architecture of New York, along with a tribute to the buildings of lower Manhattan. 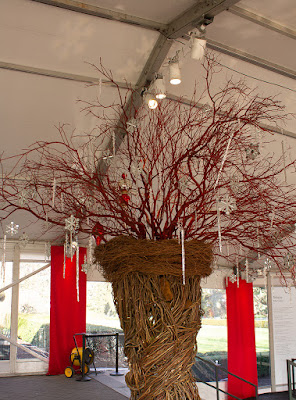 When you enter the exhibit, you are first treated to a 10-minute video about Paul Busse and his company Applied Imagination. You can watch a time-lapse video of the show’s set up here. Each structure is built out of natural materials, leaves, sticks, bark, even fungi. They are used to create the wonders of the exhibit.
After the video, the doors open, and you enter a hall filled with some of the largest models in the show. The original Pennsylvania Station, Gran Central Station, and, of course, the Haupt Conservatory are all highlighted. While you are enjoying the craftsmanship of the buildings, the model trains are running over, under and sometimes through them.
From here, you enter into the conservatory proper. It is filled with replicas of many of New York’s iconic buildings. From Yankee Stadium to the old TWA Terminal at JFK, from historic colonial houses to Greenwich Village row houses, New York’s history and architecture are on beautiful display. And, as walk down the aisle, enjoying the presentation below, you will pass under models of the city’s most famous bridges.

Finally, you enter the conservatory’s rotunda. Every year, this space is dedicated to a particular part of the city. This year it was the skyscrapers of lower Manhattan. In one section were the all of the classics, The Empire State Building, The Chrysler Building and the Woolworth Tower are among those on display. On the other side of the rotunda was a beautiful recreation of New York’s Harbor, with the new 1 World Trade Center, the ferry terminals and the Statue of Liberty all shown. 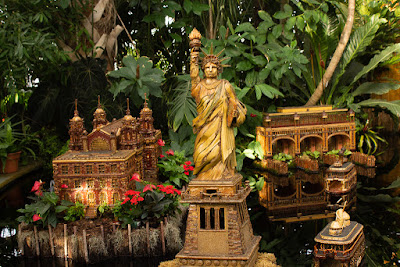 So, if you find yourself in New York during the early winter months, come up to the Bronx, and enjoy this wonderful show.

Getting There:
The main entrance to The Gardens is on Southern Boulevard, just north of Fordham Road. The Garden’s website offers good, detailed directions, but the easiest way to get there by public transportation is to take the Harlem Line of Metro North to the Botanical Gardens Station.