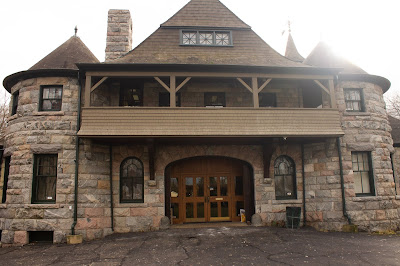 On a recent trip to South Bend Indiana, I visited the Studebaker National Museum. I found out that it shares a building with The History Museum of South Bend, so my desire to see some classic cars opened the door to a chance to explore the life of one of South Bend’s key industrialists of the 19th and 20th century.
James Oliver (1823 – 1908) was born Scotland. He moved to Mishawaka Indiana in 1836 along with several of his siblings. The area he lived in was near a large bog that provided iron ore for local industry. James took a job at the South Bend Blast Furnace Company in 1839. This is where he learned to refine and cast iron.
In 1855, James moved to South Bend, and entered into a partnership at the South Bend Iron Works. Over the years James Oliver developed and patented several improvements to the field plow, and at the same time, bought the company from his partners. Key among his innovations was a process called “cold casting.” The molten iron was poured into a sand mold. This allowed the exterior of the plow to cool quickly, creating a harder surface that resisted damage from rocks and stones in the ground. At the same time, the interior could cool at a slower rate, and therefore did not become brittle. The Oliver Farm equipment Company became one of the largest producers of plows by the 1870’s. After death of James Oliver, the company stayed in the family until the 1930’s. It had begun to lose market share because James Oliver refused to produce riding plows.

In 1896 James Oliver built a 38-room mansion for his family. He named it Copshaholm, after the town of his birth. The mansion is classic Queen Anne style, with a large wrap-around porch and rounded towers. It was built out of local Indiana fieldstone granite. The house was wired for electricity when it was built, but it was also set up for gas-lighting, so the both options are visible. The interiors are lined with beautiful wood finishing. Copshaholm was the family residence up through the death of James’ daughter, in the 1960’s.

The main rooms on the first floor were places of business and public entertaining. The main entrance hall leads to sitting rooms, parlors, the dining room and den/office of James Oliver. A vaulted music room was added in the 1900’s, with a ceiling that stretched up to the 2nd floor of the house. When I visited the house was set up for Christmas, so there were decorations and trees in every room. It was also housing a display of 1960’s women’s fashion, which made for sometimes incongruous views.
The house also had a large kitchen and parlor. This included the largest ice box I have ever seen.

The second floor is where the family lived, and where guests would stay. It was designed to provide privacy, with both public and private hallways. This allowed servants and family to move from room to room without being seen by visitors.

The third floor was primarily staff quarters, again with corridors hidden away from public view. This was necessary because the 3rd floor was also home to the family’s grand ballroom. Large party’s and dances would be held here, at the top of their home.

One thing I found interesting was the built-in methods for the family to call for house staff. When constructed, the building had a buzzer system. A family member would push a button in a room where they were, and an arrow would shift on a board in the kitchen. Later and inside phone system was installed. This allowed the family to speak with staff directly. Today only one of these systems still works, and it is the older buzzer system.

While it is not as grand as the mansions of the industrial barons of New York or Chicago, Copshaholm is a wonderful look at the life of a midwestern business owner at the turn of the 20th century.