Travel around the country, and you will find many places that offer “historical recreations.” Places where you will find actors in costumes demonstrating the manner in which people lived in a place, at a particular time. The grand-daddy of them all is Colonial Williamsburg, in Virginia.

Williamsburg was the second capital of the Colony of Virginia, after the statehouse on Jamestown Island burned down in 1698. It was already home to William & Mary College, the second oldest college in the United States, so it was a natural choice. Williamsburg served as the capital for eighty-one years, until Thomas Jefferson moved the legislature to Richmond.


For the next one hundred and thirty years, Williamsburg was a sleepy, backwater, college town. It sat away from the major rivers and railroads in the state. The main businesses were the college and the Eastern Lunatic Asylum. Over time some colonial era buildings had been modernized, but many had been abandoned or had fallen into neglect. However, they still existed, and this offered an opportunity for Williamsburg to be the only colonial capital that could be recreated.

The project of restoration was led by Dr. W. A. R. Goodwin, an Episcopalian reverend, born in Richmond in 1869. He served two stints leading churches in Williamsburg, including at the Bruton Parish Church. He saw the possibilities of bringing back the historic town. He worked with William & Mary College and raised funds from the countries richest families. Key among these was John D. Rockefeller, who help Goodwin purchase most of the houses and land in 1929.

Colonial Williamsburg is probably the largest living-museum in the United States, certainly in terms of the number of buildings it encompasses. Almost 500 buildings have been restored or reconstructed, of which, eighty-eight are considered original. The restored area of town covers one-hundred seventy-seven acres, and altogether it occupies over three-hundred acres with the new visitors center. 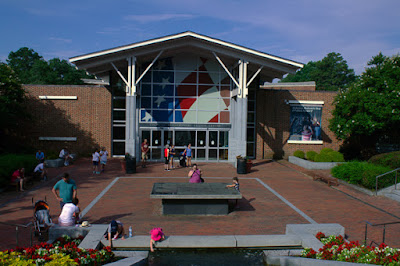 One thing that makes Colonial Williamsburg unique is that the restoration is a part of the town of Williamsburg. Its streets are open to everyone, free of cost. However, if you wish to visit most of the buildings you must purchase tickets, so start your visit at the visitors center. Built in 2006, it is about a half-mile walk from the restored area of town. The Center houses the ticket center, along with two extensive souvenir shops. You can park here for free and either walk into town or take the free shuttle bus. You can buy tickets here, or pick up ones that you have ordered on-line. You can also buy tickets or reserve spot for any special activities, like carriage rides or limited tours.


There is a lot to see and do in Colonial Williamsburg, but to me there are two places that are “must see.” One is the Governor’s Palace, the other is The Capitol Building. Their stories give the historical setting for the town in the colonial era. If you visit for more that one day, which I strongly recommend, I would start with one of these on the first morning, and the other on the second. This gives you time to see them before they get too crowded.


The Governor’s Palace was originally built in 1706 as the residence and office of the Royal Governor of the Colony of Virginia. It served that role, and then as residence of the governor of the Commonwealth of Virginia until 1780, when the government moved to Richmond. The original building burned down in 1781. It was rebuilt during the early 1930’s using the original plans, which had been found in England. Today the Palace shows off the opulence of the time, with ceremonial arms filling the hallway, and a ballroom complete with large portraits of the King and Queen and a state of the art room heater. 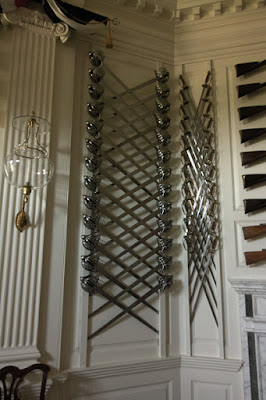 The Capital Building was originally built in 1705. It was home to the House of Burgesses, Virginia’s colonial legislature. This body had power over many local issues, but only with the approval of the Royal Governor, and, ultimately, the King of England. It was where Patrick Henry delivered his “Give Me Liberty or Give Me Death” speech. The original building burnt down in 1832. During the 1930’s it was rebuilt according to the original plans, and it opened in 1934. 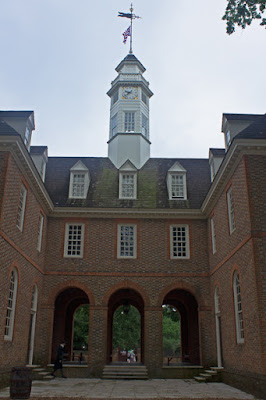 Once you have visited the two main buildings, there are many things to see and do in Williamsburg. The restoration has an excellent app that will help you organize your day. The Visitors Center also has a printed schedule available every day. One activity I enjoyed was a visit to R. Charlton’s Coffeehouse. You tour the ground floor of the building, with its game and meeting rooms. Then you sit down in the cafe and have your choice of coffee, tea or hot cocoa. While enjoy this treat, you will hear a story of local gossip, as one would have back in the day. 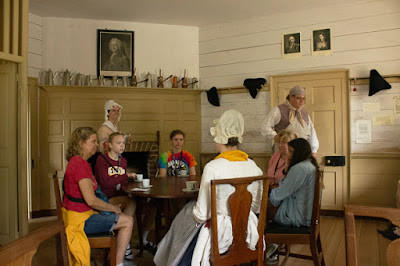 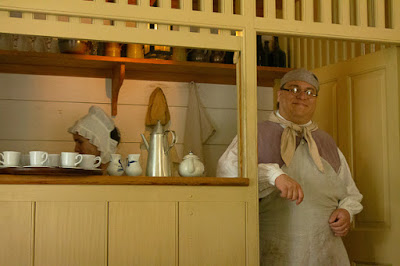 Another great place to stop is The Raleigh Tavern. The tavern was a restaurant, drinking establishment and hotel. It also provided rooms to rent for meetings, dances and large dinners. This is where the members of the House of Burgesses came to meet whenever the Governor dissolved the House, and not uncommon occurrence during the 1760’s and 70’s. This is another building that was recreated from original plans and prints. There is an excellent exhibit dedicated to the long history of African American recreators at Colonial Williamsburg. These actors portrayed enslaved and freed people and of African decent. The Raleigh Tavern is also home to a bakery that specializes in goods made from recipes of the colonial era, a great place for a mid-day snack. 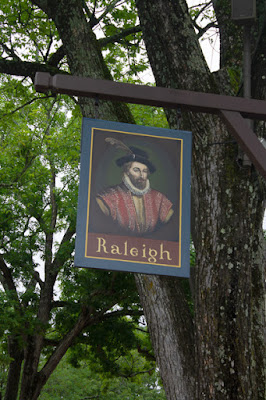 Colonial Williamsburg is a fascinating place to walk around. It is home to dozens of craftspeople who work here year-round. From the blacksmith, to the wheelwright to the cabinet maker. As you walk around the town you can enter their shops and watch them work. They are happy to talk to you as they carry out their tasks. I really like that fact that these are not actors. This is not a “medieval faire” where people talk in the “manner of” Colonial America. These are people who live and work in the here and now. They will talk to you about life in colonial times, but also about the work they do now, and they don’ t talk down to to you. 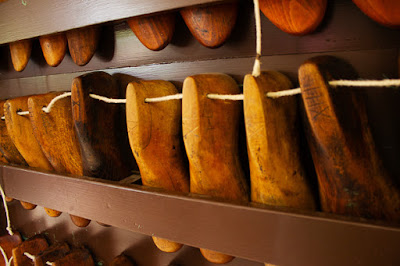 A visit to Williamsburg is not something to be rushed through in an afternoon, or eve one day. It is worth taking two or three days to explore it fully. In addition to the restoration, there are two art museums, which I did not have time to visit. Also, Busch Gardens amusement park is nearby, so there is plenty to do.

Eating:
There are several restaurants in the restored area of Williamsburg. You will need reservations for dinner, and the lunch can be a long wait. Another option is Merchant’s Square, just outside the restored area, it offers several choices of restaurants and other stores.
Posted by Jonathan L at 5:00 AM