New York City is filled with museums dedicated to the art and culture of nationalities and religions from around the world. One that always has interesting exhibits is the Jewish Museum, on the cities Museum Mile.

The Jewish Museum was founded in 1904, when Meyer Sulzberger donated his collection of ceremonial items to the Jewish Theological Society, on 122nd street in NYC. Over the next few decades, the collection grew as more and items were given to the museum. These included over 350 pieces sent from Poland in 1939, shortly before the Nazis invaded the country. In 1944, Frieda Warburg donated her family mansion, on 92nd Street and 5th Ave., and in 1947 The Jewish Museum opened its permanent home. During the 1960’s, the museum’s focus expanded beyond the ceremonial and religious. The curators began to collect art by (mostly) Jewish artists and about Jewish life. Today, the Jewish Museum has the largest collection of Jewish art and culture outside of Israel.

The third floor of the museum are galleries that are home to a revolving exhibit of works and items from its permanent collection. One gallery is dedicated to the creation of George Segal’s “Abraham and Isaac.” He created this statue to commemorate the murder of 4 students, and injury to 9 more, by the Ohio National Guard at Kent State University.

Another piece in the permanent collection if OY/YO by Deborah Kass. This sculpture is a play off of LOVE by Robert Indiana.

I was surprised by one piece on display. Allos Itzhak from The World Stage: Israel, by Kehinde Wiley. It is one of a collection of paintings Wiley did to represent the breadth of Jewish diaspora living in Israel.

On the 2nd floor is Louise Bourgeois: Freuds Daughter (through Sept 12, 2021). Louise Bourgeois (1911-2010) is best known for her oversized sculptures, but this exhibit focuses on her long relationship with Freudian psychoanalysis. It presents her personal writings in reflection of her process, along with about fifty pieces of artwork. The most complex is Passage Dangereux, a large collection of caged rooms, each representing a rite of passage of a young girl moving toward adulthood. 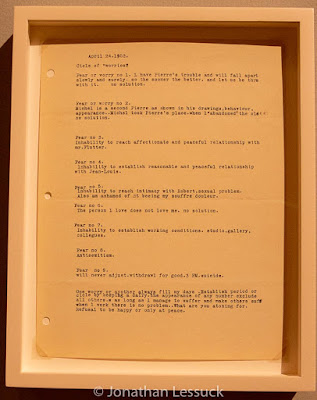 On Sept. 20th, 2021 the first floor gallery will reopen with Afterlives: Recovering the Lost Stories of Looted Art. This exhibition traces the fascinating timelines of individual objects, stolen by Nazi official, as they passed through many hands and sites before, during and after World War II.

The Jewish Museum is not a large place. But its size, and the depth of its collection, allow a visitor the space and time to explore and reflect on its shows in an intimate setting.