Whether you live in NYC or are coming to visit, the northern tip of Manhattan is a fascinating place to visit for history, geology and food.

Today the neighborhood of Marble sits in the boro of The Bronx, just across the Broadway Bridge from Manhattan (see map), but that wasn't always true.

For most of its history Marble Hill was a physical part of the island of Manhattan. It was separated from the Bronx by a river called the Spuytan Duyvil by the Dutch settlers.  Marble Hill was the home to quarries that provided much of the marble for the early buildings in NYC. Then the Erie Canal opened and the Hudson river became the major route for food and freight to and from the Great Lakes. Engineers looked for a way to shorten that route and decided to carve up the northern tip of Manhattan. Using the quarries that were already there  they opened up larger shipping channel to the Harlem River and thus Marble Hill became physically attached to the Bronx.


You can still see the marble that is under Marble Hill if you take the time to look. Here is a picture taken from the Broadway Bridge, which carries Broadway and the #1 subway line between the Bronx and Manhattan. 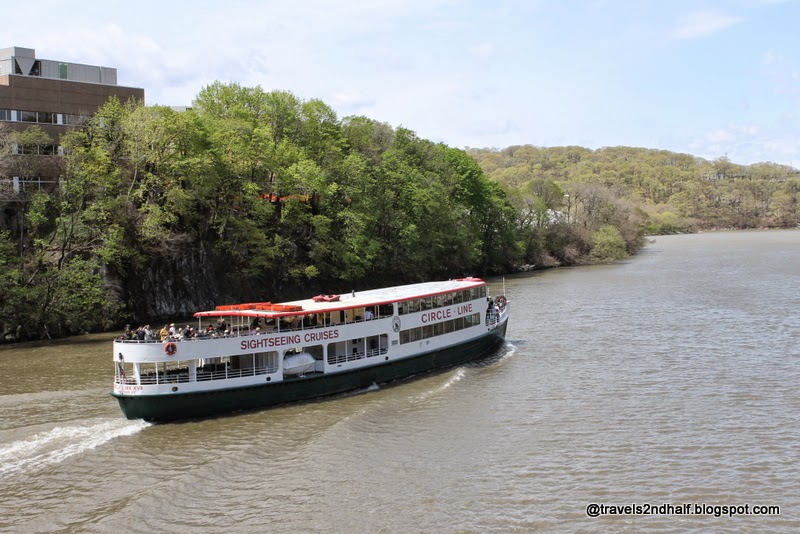 One really fun way to see NYC is on the the Circle Line which cruises around the island of Manhattan. It is around a 4 hour cruise, and it has views that you can't get anywhere else.

If you cross into Manhattan you enter the neighborhood of Inwood (see map). The Inwood neighborhood blossomed in the early 20th century as a home to newly arrived immigrants. With the building of the IRT  #1 subway which stretches from South Ferry to Van Cortlandt Park, upper Manhattan became accessible to those who worked downtown.
As you walk down Broadway you find a remnant of bygone days - The Seaman Arch:


Now home to an auto repair shop, in the mid 1800's this arch was the entry to the 25 acre summer estate of the Seaman family.

Continuing on you get to Isham Park which is between Broadway and Seaman Ave north of Isham Street. The park is marked off along Broadway by by stone wall made of local rock. You can see large pieces of marble along with pieces of gneiss:

Isham Park also has an outcropping of rock that has been gouge by glaciers over 20,000 years ago. The striations all go in a north-south direction and were made by rocks that were dragged over the bedrock as the glaciers advanced and retreated. These rocks are along Isham Street near Seaman Ave. 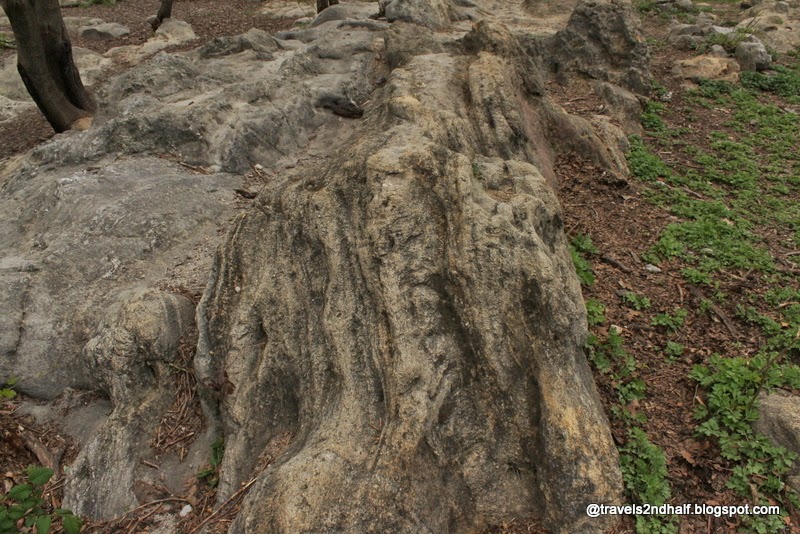 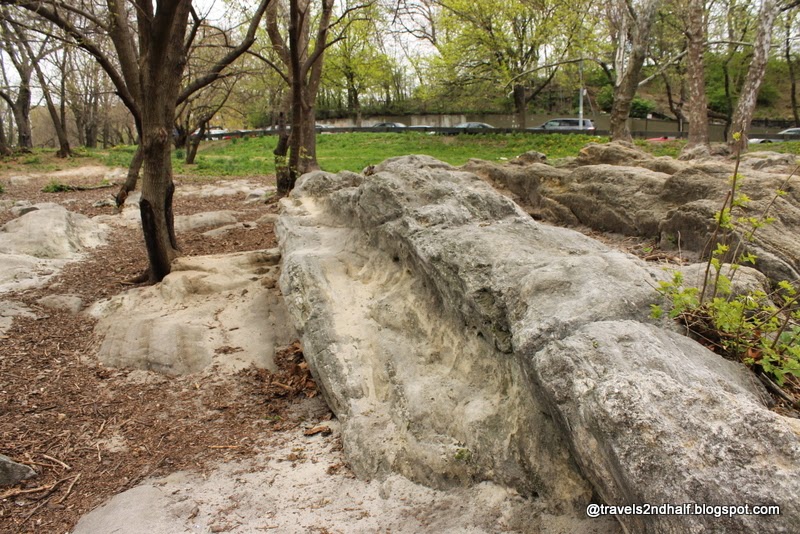 Across Seaman Ave is Inwood Hill Park, home to a geologic anomaly - a horseshoe valley. This valley is the result several different geologic processes.

The geology of this area is rare, and people come from around the world to study it. The basics are this - The western part of the Bronx and Manhattan are composed of 3 ridges of gneiss - Riverdale, University Heights and Grand Concourse, with Broadway, Jerome Ave. and Webster Ave. sitting in the valleys. These ridges and valleys were formed when layers of gneiss and marble were "upturned" which allowed the marble to eroded away and leave the gneiss behind. This same process caused the erosion that formed the horseshoe valleys in the park.

Walking into the Inwood Hill Park you can feel like you have left the city for another place. The noises of the street fade away and you are completely surrounded by trees, flowers and animals.

Some of the paths have not been maintained as well as in other parks, but if you walk through the paths you will come to hills which house the Indian Caves. Anthropologists have found stone tips and arrow heads used by Indians dating back hundreds of years.

In fact this park sits on the site Peter Minuet "bought" Manhattan Island from the local tribe. What they thought they were selling is not really known.

Walking back north from the valley there is a beautiful tidal pool . 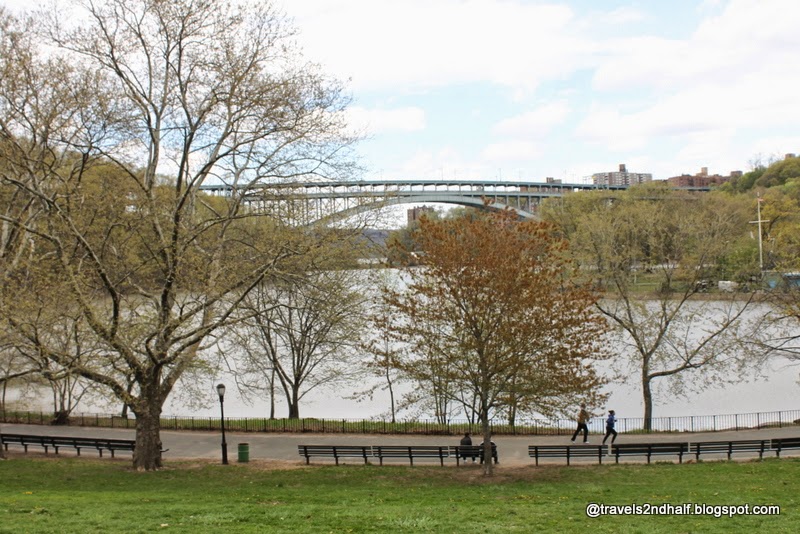 Across the Spuyten Duyvil sits an icon that dates back many decades: 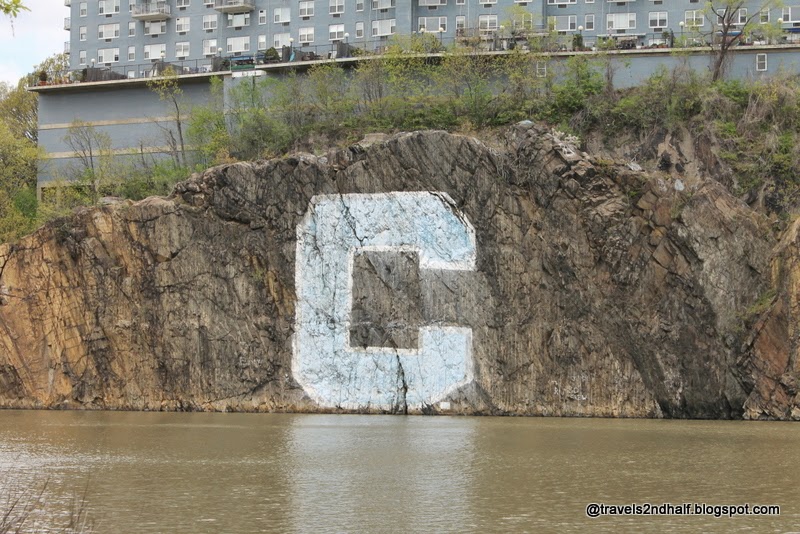 This C represents Columbia University. Now it is not true that Columbia has bought ALL the real estate in northern Manhattan, at least not yet, but it is there because the Columbia University Crew team has been based at the tidal pool here at 217th street:

This area is also home to Columbia's Baker Field, where generations of CU football players have taken on the best of the ivy league - and usually lost. 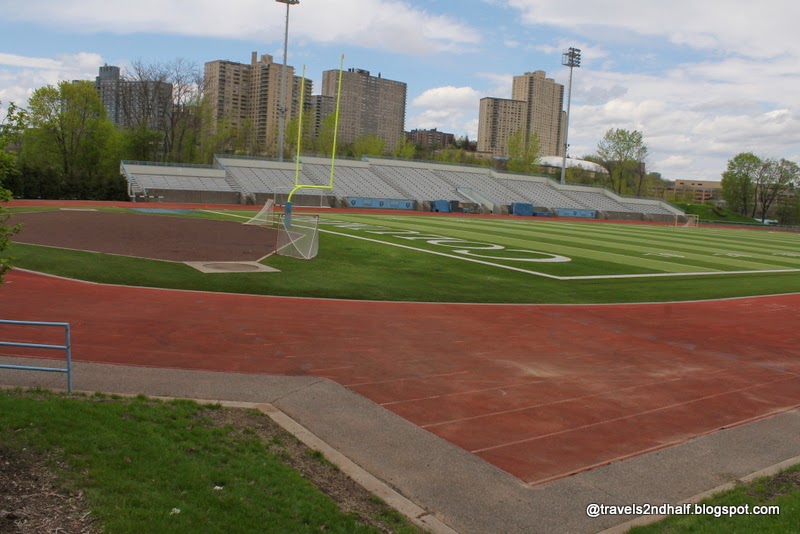 There are several good restaurants in the area. I recommend three:

If you want something more substantial walk down to Dyckman Street and choose between Mamajuana's Cafe and Papasito Mexican - both have good food and great drinks, if they are a little over priced.