I had the chance to walk around Greenwich Village (see map) for the first time in several years. I know that this is going to sound like a "grandpa is complaining about change again" blog, but I was really disappointed in what I found.

Let me start by saying that I was a teenager in the 1970's. I spent a lot of time wandering around The Village. I loved that there was an edge to it. West 8th street had a great mix of head shops, record stores, stores that specialized in really good band tee-shirts and posters. It was a place where 20 drama club nerds could end up after a successful show and dinner in Chinatown, sitting in Washington Square Park with a jug of wine, not worried about being hassled by the police. There were inexpensive restaurants and bars. There was the 8th street Playhouse:

Yes, it was edgy and seedy!  That was the whole point.

There was an honesty to the village. Anyone could come. Everyone could be who they were. This led to birth of political movements.

It was home to movements of music and culture. From the Folk revival of the 50's and 60's to the Punk rock movement of the 80's many up and coming artists found their home in Greenwich Village.

Well, Greenwich Village is still worth the trip to visit. There are many architectural treasures to be seen, just above street level.

On 6th Ave and 10th street is the Jefferson Market Library. Built in 1877 as a courthouse it was designed by Fredrick Clark Withers and Calvert Vaux. The building was voted one of the 10 most beautiful buildings in America in 1880. and was the site of the trial of Henry K. Thaw for the murder of Stanford White. For more on the first "trial of the Century" see here. See more of its history here.

As I said earlier, 8th street used to be one of my favorite places to hang out. I would spend hours in the poster and t-shirt shops. I used to go to a place called Mamie's for ice cream sundaes. And i used to go to see the Rocky Horror Picture Show with my friends. It was a place where someone who didn't have a lot of money could come and hang out for an evening and feel like they were welcome and belonged here.

Today 8th street has become a gentrified, and expensive. The restaurants are all upscale. Now, it is home to one of my favorite "coffee-snob" places - Stumptown
Stumptown Coffee (see here) is an amazing place - not you neighborhood diner. In fact it makes Starbucks look inexpensive. But the coffee it produces is out of this word.Every month or 2 I treat myself to a cup of their fresh brewed drip coffee - a pot of coffee made just for me with the care usually given to a Japanese tea house.


On the other hand there is also 5oz. Factory. This store sells frozen custard and fried Wisconsin Cheese curds. But taking advantage of being on 8th street their prices start at over $7 for the cheese curds. Way beyond what I am willing to pay.

But all is not forsaken. For Washington Square Park is still the heart of Greenwich Village, and it has been rehabbed and is back to jewel status.

Over the past decade Washington Square park has been totally rehabbed. The benches have been replaced, and there are new playgrounds for kids. Meanwhile the old trees are still there giving shade as they have for decades.

And the feel of the park as a town square is still there. Near the Arch you will find the drummers and guitar players who have been there since the 1950's still congregating. The fountain is a performance space for acrobatic troops. The southwest corner is still home to chess players ready for a game. But be on your a-game before you sit down because they are good and will take your cash.

In other words, if you want some place to come and sit and watch people Washington Square Park is on of the best places in NYC.

One of the more interesting performers is the Washington Square Piano Player.
Every weekend, weather permitting, Colin Huggins brings his Baby Grand to the park and plays for tips. From 60's rock to swing and blues to Liszt and Rachmaninoff. He plays and people dance: 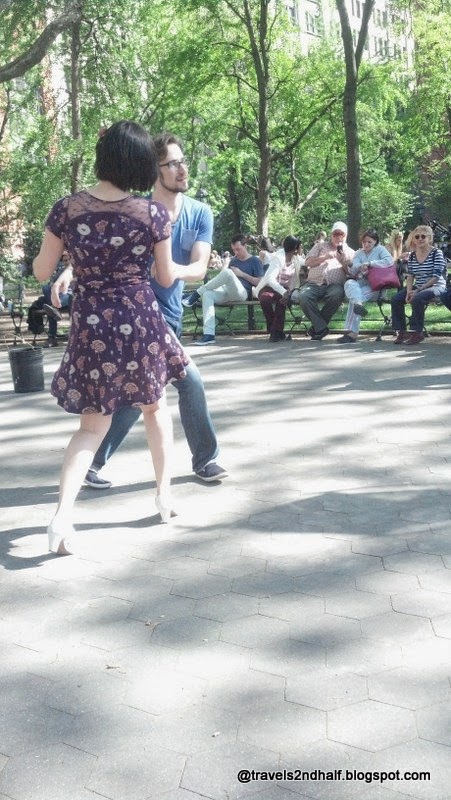 One place that is definitely worth the stop is Porto Rico Importing Co. This was the first store I had ever seen selling fresh roasted coffee. Walking into this shop, which has been on Bleecker Streetsince 1907  near 6th Ave is a delight for all of your senses. 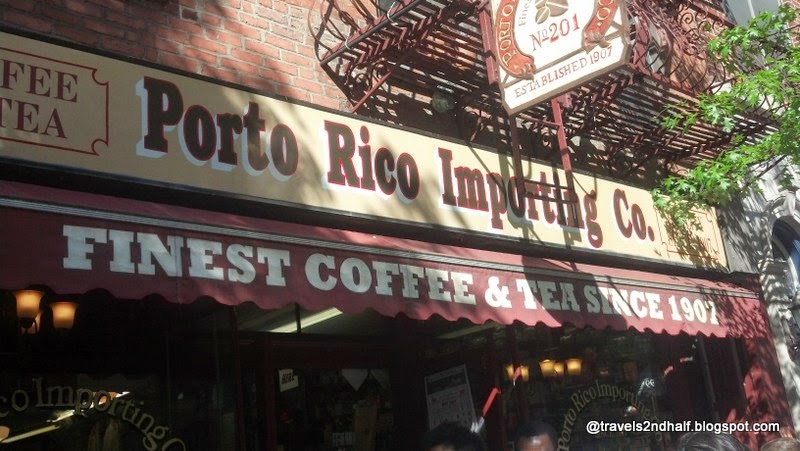