I went to “urban” colleges. That is, the schools I attended did not have extensive campuses. They were built into the fabric of New York City. The Cooper Union consisted of three buildings in 1979, all placed along The Bowery at Cooper Square. My other college was The City College of New York. While it does have a campus that is 2 blocks wide by 7 blocks long, it is basically a commuter college, so there was never a great campus life. Also neither of my schools had “ big time athletics. Copper Union had no interscholastic sports, and City College competed in the City University of New York Athletic Conference which, truth be told, is at the bottom of Division 3. As a result I have always been fascinated by large universities. So I really enjoyed a chance to visit and spend a couple of days on the University of Georgia Campus in Athens GA.

The first major difference is the size. The University of Georgia is big when compared to the schools I attended.  It is over 700 acres, or to put it another way, it is 2 miles long and about a half mile wide. That is about the size of Central Park in New York City. It is so big that it has its own bus system, I don’t mean a shuttle service, it has a University Transit system with multiple bus lines. The University of Georgia has 35,000 undergraduate students and about 5000 graduate students. But it never felt crowded, well except for the traffic a 5pm. Instead there are plenty of open spaces both interior and exterior. The campus is filled with quads, benches and other outdoor places for students to relax, completely covered by wifi, so students can work wherever. And buildings all have nooks and crannies for students to hang-out and relax while the work.


The University of Georgia has a history that goes back over 200 years. Its charter was passed by the state of Georgia in 1784. It opened in 1804 using just one building. The Franklin College, now the Old College, was a building that contained all of the classes, living and eating quarters for its students. The North Campus is the oldest part of the university, and this area feels like it. The buildings are old, and while they are not Ivory covered, they certainly have the look and feel of an old campus. However, the university has continued to grow, and the level of construction on campus today was impressive. 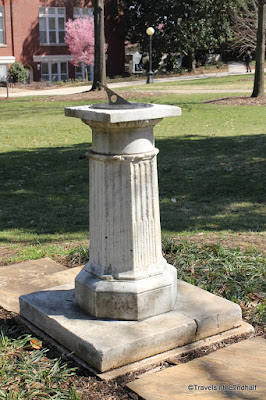 Another big difference is the level of sports on campus. The University of Georgia is a member of the SEC – big time sports, especially football. This is something that was foreign to my college experience. So I was really impressed with Sanford Stadium. Sitting in the middle of the campus, the stadium seats over 92,000 people. I could only imagine what this campus looks like on a football Saturday, with the crowds, tailgating, and the game. Maybe one day I will get to see big time college football in a campus setting. 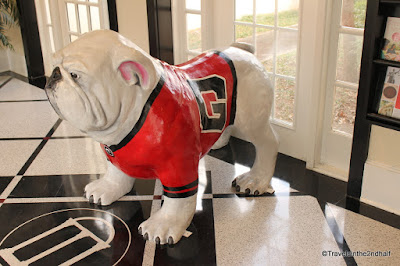 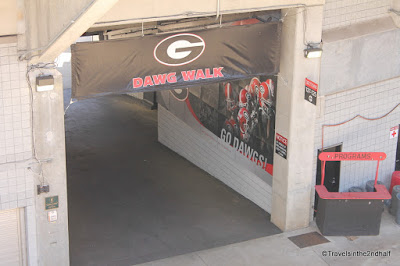 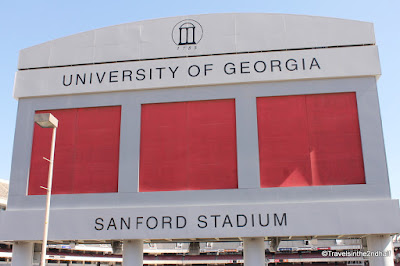 I had a wonderful time visiting The University of Georgia. It was not your typical tourist destination, and reminded me of things that I might have missed back when I was young.

Visiting UGa:  The University of Georgia sits right on the edge of downtown Athens, Georgia. If you come to visit the school go to or contact the Visitor’s Center in the 4 Towers Building on the southern end of the campus to arrange a campus tour. This 75 minute bus and walking tour is very informative.
Posted by Jonathan L at 4:30 AM