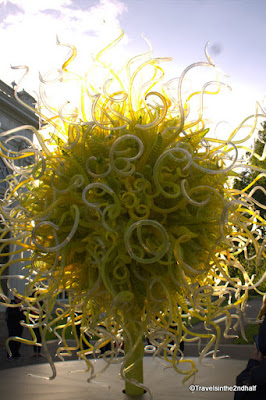 Every year the New York Botanical Garden puts together a special show that is on exhibit from spring to fall. Two years ago they offered a show dedicated to Frieda Kahlo, her botanical paintings and her garden at the Casa Azul. Last year the show was a tribute to Impressionist painters and their gardens. This year the NYBG has worked with Dale Chihuly, the amazing glass artist, to create a fantastic exhibit.

Dale Chihuly (born 1941) has been working in glass since the 1960’s, when he dropped out of college and moved to Florence to study art. He returned to the United States and earned degrees in sculpture and Fine arts from University of Wisconsin-Madison and the Rhode Island School of Design. He received a Fulbright Fellowship and went to the island of Murano in Venice to study glass blowing. While he has not been able to hold a glass blowing rod since an accident in 1979, he designs his glass statues and coordinates the people who work in his studio. According to an April 22, 2010 article in the San Diego Union-Tribune, Chihuly sees himself as “more choreographer than dancer, more supervisor than participant, more director than actor.”

Usually, exhibits at the NYBD are housed in the Enid A. Haupt Conservatory, with an associated exhibit at the gallery in the Mertz Library. However, Chihuly’s works are larger than life. Their organic forms fit in with entirety of the Garden’s spaces. Several of his pieces have been placed along the paths, amongst the trees and fountains. 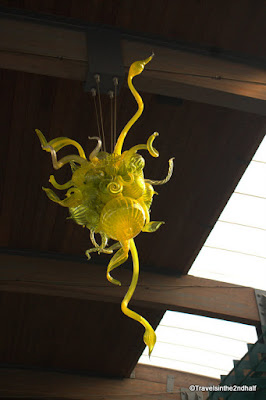 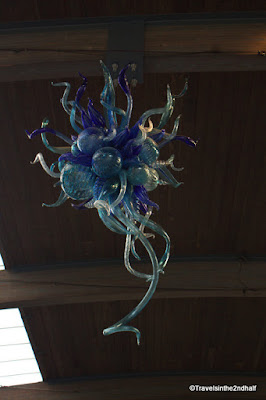 When you visit, I would suggest that you start by taking the main path from the Visitor’s Center to the Mertz Library. Along this path you encounter 3 wonderful pieces. First will be “Red Reeds and Logs” in the main fountain. Tall, deep red glass rods emerge from oak logs placed in the fountain, their reflection in the water below adding a new dimension. 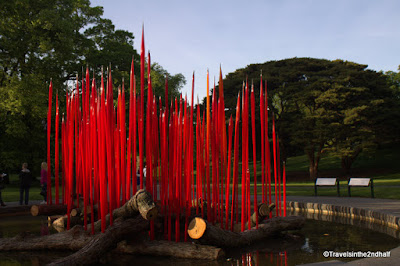 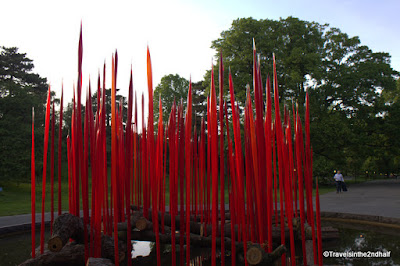 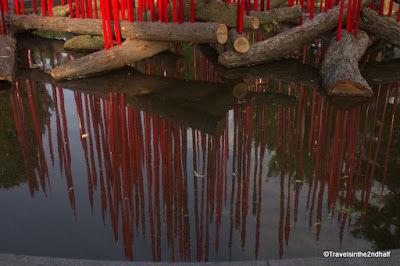 Next you will find “Sapphire Star,” a beautiful starburst of blue, white and clear glass rods. Looking like an exploding star, or the head of a giant dandelion, this piece shines in the light. 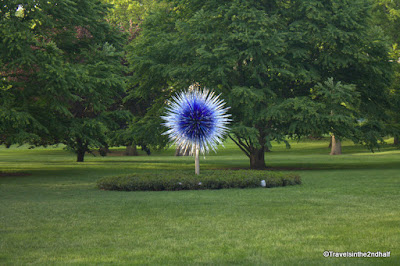 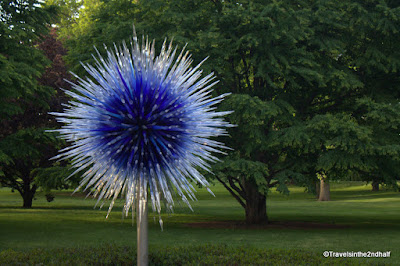 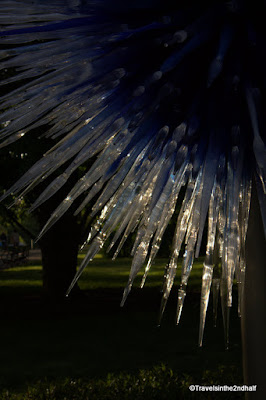 In front of the Mertz Library is “Blue Polyvitro Crystals.” This instalment looks like a collection of giant blue ice cubes sitting in the Fountain of Life. The Library’s gallery has an exhibit of Mr. Chihuly’s early work, along with some of his works on paper. 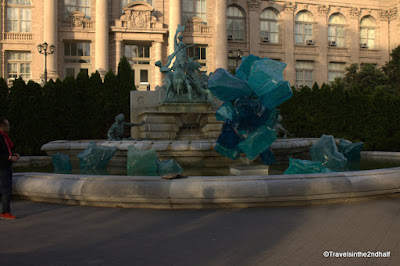 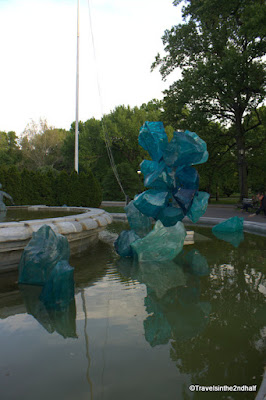 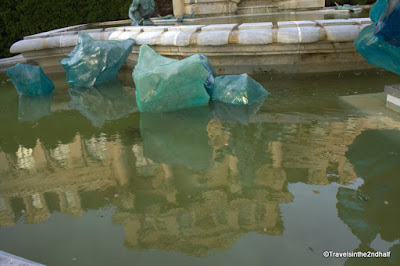 The bulk of the exhibit is in the Enid A. Haupt Conservatory. Here you will find many instillations. Some seem almost hidden behind plants, while others tower overhead. The pieces have been chosen because they fit into the spaces where they are shown. The entranced is graced with “Sol de Citrón.” This piece sits like a tree with its myriad of curving pieces picking up the sunlight as the sun fell towards the horizon. Inside the exhibit shows a full range of Chihuly’s styles. Some pieces look like orchids, others, like bowls. There is a piece that towers almost thirty feet above our heads, while another that is a neon light sculpture. 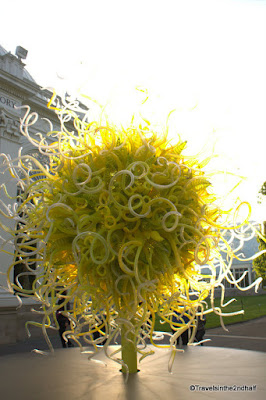 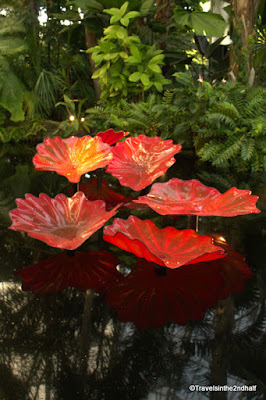 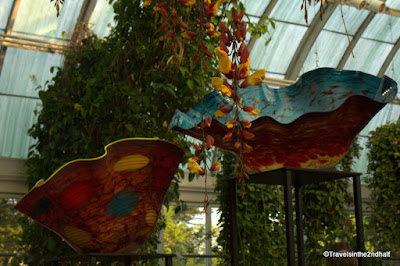 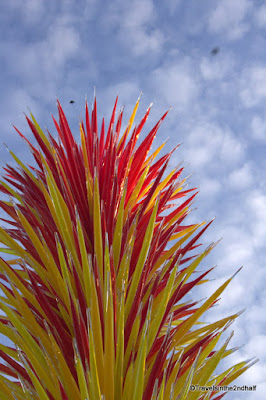 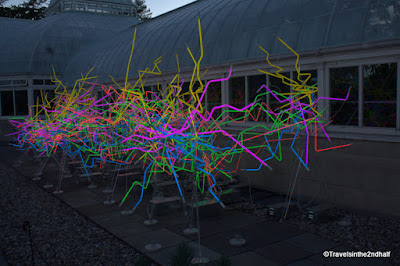 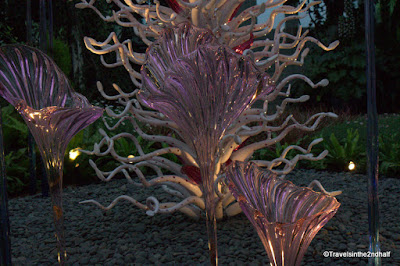 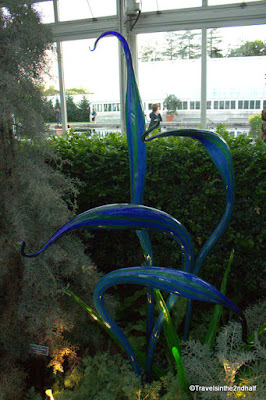 One piece that I found extremely interesting are the pairs of colored rectangles of glass in the reflecting pool. As you walk around the pool, the colors and shapes of both the pieces and their reflections seem to change as your angle of viewing shifts. 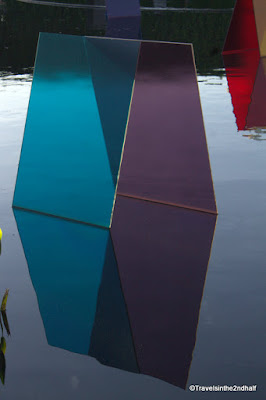 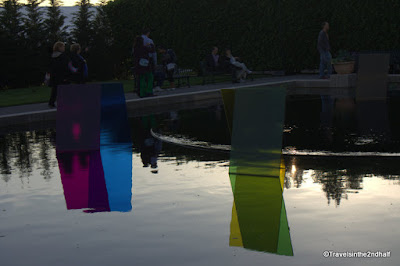 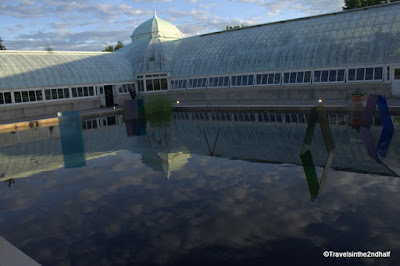 Dale Chihuly is a phenomenal artist. I have found his work both fascinating and exciting for many years. This exhibit shows him to a wonderful advantage, and is the best show that I have seen produced at the New York Botanical Gardens. Come up to the Bronx and see it.