There are many old towns in Sicily, but few are as old as Siracusa. Like Agrigento, on Sicily’s southern coast, Siracusa dates back to the times of ancient Greece. It was one of the most important trading towns of that era. So, a trip to Siracusa is something that I highly recommend if you are visiting Catania.

There are many tours to Siracusa available, we used Lemon Tours.  Since we were the only ones interested in going on that day, they arranged for us to have a private tour guide – Ana. Ana picked us up at 8:30 and we began our trip south. Ana was an excellent guide. She was friendly, outgoing and very knowledgeable. We had a great time during the drive, talking about culture, life in Italy, families and just about everything in between.

Our first stop in Siracusa was at the Greek Theater. This amphitheater dates to the 5th century BCE, although it was renovated in the 3rd century BCE and again during Roman times. It is 136 m in diameter, and has 67 rows carved out of the limestone hillside. While the wear and tear of over 2500 years is plain to see, this is still an amazing place to visit. We entered at a path that divides the upper and lower halves of the theater, and you could almost feel what it was like to be here to see a play or other performance. The only downside was that it was 95 degrees the day we visited, and the heat really took its toll on us. After a quick walk around the theater, we went down to the orchestra, where the only shade trees were to be found. Even though we were awed by this space, we were quickly ready to move on to find someplace cooler. 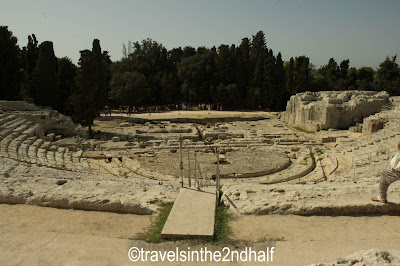 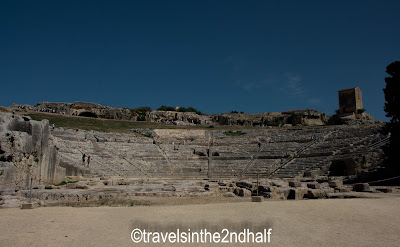 Next on our tour was the Isola di Ortigia – the old city of Siracusa, which sits on a small island just off the coast, well like 10 feet off the coast. This section of town is among the oldest areas that are still around, especially on the east coast of Sicily (thanks, Mt. Etna). Our walk started with a trip through the market. 4 blocks of fruit, vegetables and fresh fish. One thing that we found here that we had not seen before were fresh oysters. For €2.5 I had an oyster and small cup of wine.

The southern end of the market opened on to Apollo’s Temple. Built in the 6th century BCE, it is the one of the oldest temples on Sicily. It became a Byzantine Church, a mosque and even served as barracks for Spanish Troops. Today it is mostly in ruins, but there is a park in front of it and local guides to show you around.

From the temple we walked south (and uphill) to the Fontana di Diana in Piazza Archemede. The fountain was built in 1907 and is a wonderful centerpiece to the juxtaposition of the baroque and fascist era architecture that surround the piazza. This piazza is named for Archemedes of Syracuse, the scientist/philosopher who is most famous realizing that the purity of a metal can be determined by finding it density by the displacement of water.

Our tour continued to the Cathedral di Siracusa. This Cathedral is a UNESCO World Heritage Site. It was built and incorporates the Temple of Athena that dates back to the 5th century BCE. Next, it was on to the southern end of the island, to the waterfront, and back. We walked through the small winding old streets of Ortigia. The buildings with their beautiful balconies sometime closed in on us, but the bright sun and light color of the walls made them feel light filled and airy. 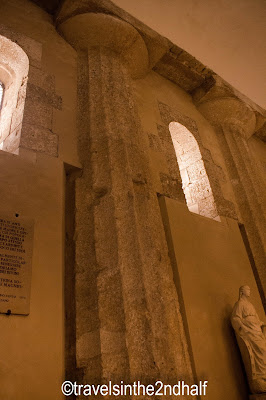 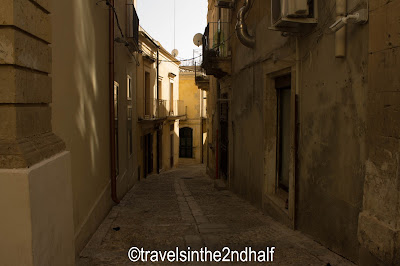 Our time in Siracusa finished with a wonderful lunch at a restaurant called Il Clandestino, courtesy of Lemon Tours. We had two wonderful charcuterie plates, meat and cheese. Our guide, Ana, joined us, and we continued the wonderful conversations that surrounded our day.

Now, don’t be fooled, this wasn’t the end of our tour. After lunch, it was on to the town of Noto. Here, after dealing with some young pre-teens, who promised to guard Ana’s car – for a price, we walked through the town to see more beautiful baroque architecture. The Basilica Minore di San Nicoló and the Palazzo Ducazio sit across the street from each other in a baroque face-off. They stare each other down for the title of most beautiful building in Noto. Behind the Palazzo we took one last break at Caffé Costanzo for the best granita we had on this trip. Granita is like a slightly watery Italian ice, but so much better. When done right, it is full of flavor without being super sweet. Caffé Costanzo does it right.

Our day in Siracusa was fantastic. Once again, having a private tour guide made it really special. Ana gave us the individual attention that a large group would have been unable to provide. She also gave us insight to the life of Sicilians that we would never have received on our own.
Posted by Jonathan L at 5:00 AM