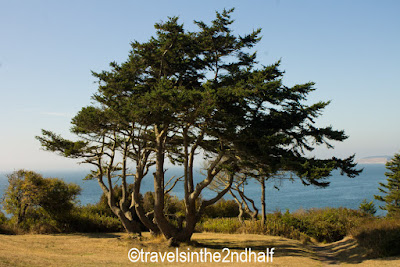 “It is oppressively green!”

That is how The Amazin’ Ms. D described what she saw as we drove across Whidbey Island. She was on her way to a two-week retreat at Hedgebrook Farm, and I was going to spend that time driving around the Olympic Peninsula. “Oppressively Green” was a phrase that came back to me time and again during my trip.

For me, there are two advantages to passing through Whidbey Island on my way to the Peninsula. One is getting to visit Whidbey itself. More importantly, I get to take two ferries on the trip. I love taking ferries for the same reasons that I love traveling by train. It forces me to slow down. Waiting for the ferry, I can get out of my car and explore. My first ferry on this trip was from Mukilteo, about 25 miles north of Seattle, to Clinton, on Whidbey Island. This is a short ride, about 15 minutes, but it is still worth getting out of the car. I got a memorable view of the coast of Puget Sound on a foggy day.

It is oppressively green

As we pass from Clinton WA onto route 525, we drive through the forest for the first time. That is when The Amazin’ Ms. D made her observation. The forest is impressive, especially for two city kids like us. The trees are thick and lush. Mostly evergreen, they hold their hue all year long, and even as the days shorten, the deep green of the forest remains all encompassing.  Route 525 is the main highway across Whidbey Island, and it passes through forests, and past farms. Whidbey’s economy is mostly farming and tourism. It is home to many artists and writers. Our first stop is in the town of Freeland. This quaint hamlet has galleries, boutiques, and other shops. There is enough there to keep you busy for an afternoon or two. There are also several cafes where you can sit and enjoy a good cup of coffee. We headed to Gordon’s on Blueberry Hill, where we had and excellent lunch, a burger for me and salmon for Ms. D. Our lunch came with a picture-perfect view of the inlet that Freeland sits on.

After dropping Ms. D off, I drive north to the Coupeville-Port Townsend ferry. Following the signs, I leave route 525 for route 20. When I get to Crockett Lake, the signs take me off of route 20, and to the north of the lake. The road leads me past Camp Casey, and to the Fort Casey State Park. Being both early, and a sucker for state parks, I decide to explore a little. Fort Casey was once an important piece in the defense of Puget Sound.

Built in 1897, Fort Casey served with Fort Flagler on Marrowstone Island and Fort Worden in Port Townsend, to create what was called a “triangle of fire,” which would effectively block any invading ships trying to enter Puget Sound through Admiralty Bay. Fort Casey had two “disappearing guns.” The 8-inch artillery guns were placed on lifts which allowed them to be hidden behind the concrete fortifications when not firing. They could be loaded in relative safety and then, when ready, they were raised above the walls, fired and then returned to their original positions. This kept the crews and guns safe from enemy fire. But as air warfare developed between and during World War 2 the guns became obsolete and the fort was decommissioned in the 1950’s. 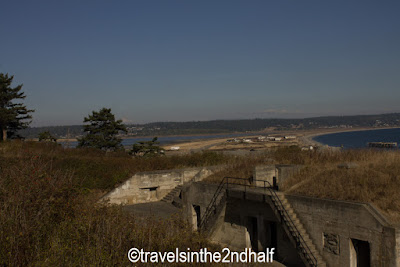 Fort Casey State Park is home to the Admiralty Head Light House. The first light on this site was built in 1850. In 1903 it was replaced with the cement and stucco structure present today. The beacon was in service until 1922. It was restored in 2012, and today is a historical center and gift shop.


Finally, Fort Casey overlooks the Coupeville-Port Townsend Ferry. This is my second ferry ride of the day. There is not to to see or do while waiting for the ferry here. There is a restaurant about 100 feet from the parking lot. The ferry ride to Port Townsend take about 30 minutes and is a great way to see the sound and its islands. 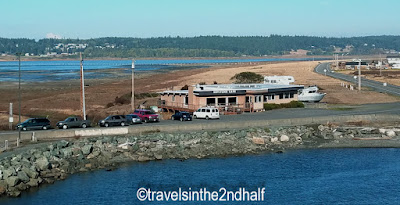 Getting There: The easiest way to get to Whidbey Island is to take one of the ferries run by Washington State. Either from Mulkiteo to Clinton, or from Port Townsend to Coupeville. You can find information about schedules and rates here.

You can also drive to the island by taking the WA-20 bridge at the north end of the island from Rosario Beach WA through Deception Pass State Park.

A note on Washington State Parks - Most state parks charge a $10/day access fee. You can buy a year long "Discovery Pass" for $30, which I highly suggest if you are going to be in the area for any length of time.