Cruising the Elbe in Hamburg 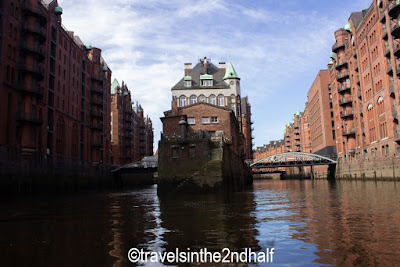 No trip to Hamburg would be complete without taking a cruise on the Elbe River. Like Venice, Hamburg is a city of islands, and the best way to see them is from the water.
Take the S-Bahn to Landungsbrüken, the St. Pauli Piers. This is a 700 m (almost half-a-mile) long floating pier that is home to many ferries, water taxis and several companies that offer tours along the Elbe.  All of the companies offer both one and two-hour tours. I strongly recommend the two-hour tour, and I will explain why later on. Before you buy you ticket check carefully as to the language of the tour. Many of the tours are only in German, and even from the companies that offer it tours in other languages on some boats. I ended up on a German only tour. While I missed information about what I was seeing, I also avoided having to suffer the “guide humor” that seemed to be plentiful, judging from my fellow travelers.

The tour starts with a trip down the canals, through the Speicherstadt neighborhood.
The name translates as “City of Warehouses.” Speicherstadt is a UNESCO World Heritage site. It is the largest district made of warehouses, whose buildings are supported by wooden piles, in the world. It was built as a tariff free zone, where goods could be brought into Germany without being taxed, a situation that dates back to Hamburg’s status as a Free Imperial City under the Holy Roman Empire. The buildings were constructed in the 1880’s in a neo-gothic style, with red brick facades, and supported by oak log piles. They extend down to the water level to allow the transfer of cargo that were brought in by barges from the ships docked nearby. 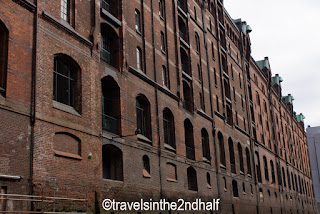 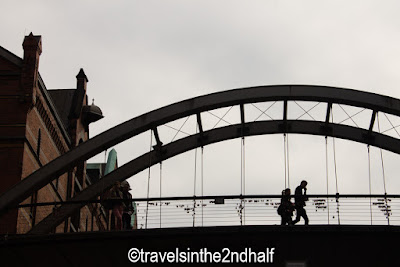 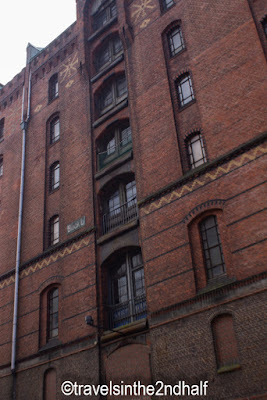 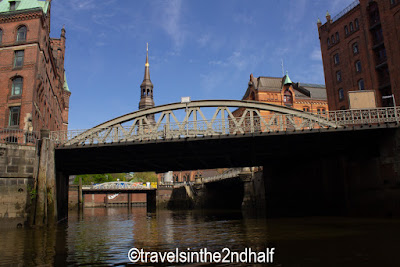 Speicherstadt is part of the larger Hafencity area. Grasbrook Island, which makes up most of Hafencity, was an area of piers and shipping from the 1800’s through World War II. During the post war era, as shipping changed to mainly container cargo, the piers in Hafencity were no longer needed. In 2001 the city of Hamburg began a major urban redevelopment project. They tore down the docks and warehouses on Grasbrook Island. In their place, modern apartment and office buildings are going up. The center piece is the Elbphiloharmonie, instead of tearing down a warehouse, they built a new structure above it creating a concert hall and apartments that comprise the tallest occupied building in Hamburg.

After exploring the canals, the tour than heads out onto the Elbe. Sailing west, we pass the Fischmarkt Hamburg-Altona. The fish market began here in the early 1700’s in what was then the town of Altona. Over the years Altona was incorporated into Hamburg, and in the 1880’s a permanent structure was built for the market. While the daily sale and auction of fish has to a nearby modern building, Every Sunday they return to this spot for a public sale that has now grown to include vendors of fruit, prepared food and other goods.

The tour continues west on the Elbe, sailing past several museums, theaters and even a beach, all along the north shore of the river. We have now arrived at the difference between the longer and shorter tours. If you take the one-hour tour, the boat will turn around here and return to the St. Pauli Piers. Here the two-hour tour turns south down a canal. While the tour guide has been focusing on the sights along the north shore of the Elbe, the south shore has been ignored. You might think that is because there is


nothing much to see there just the industrial Port of Hamburg. But now, that is where our tour is heading. As the boat leaves the Elbe behind, we are quickly surrounded by the giants of the sea. The container ships being loaded and unloaded tower over our vessel, as we zip between them, like a minnow among the whales. You can see the cranes, whose operators seem to defy physics, smoothly moving containers. We pass through a lock into another canal, where there are more freighters, along with repair docks. As we leave this canal we pass the floating dry dock, where boats have been lifted out of the water to undergo maintenance and repairs. Once again, the size of these ships is amazing. 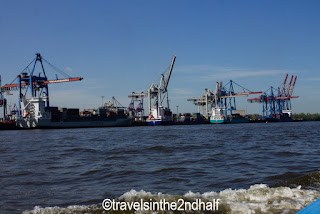 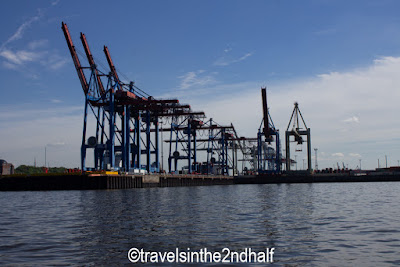 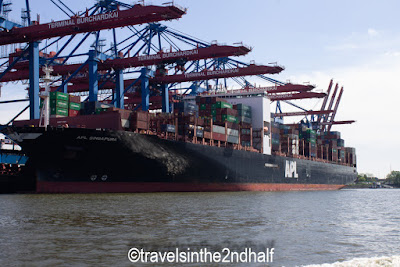 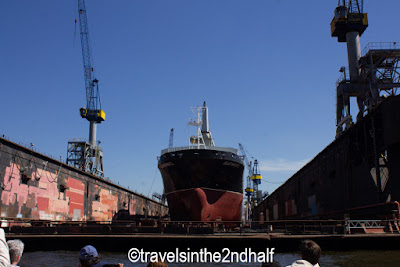 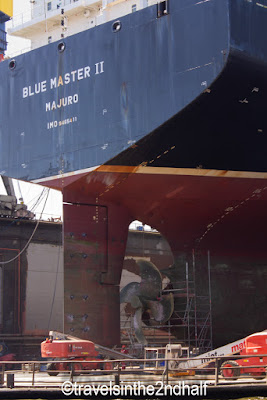 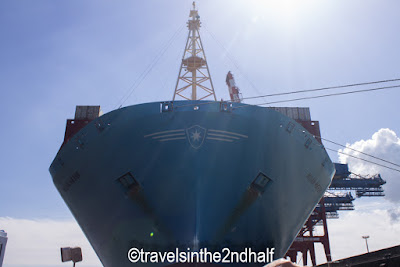 After our tour, we walk past the west end of the pier, to a freestanding round building. It looks kind of inconsequential, but it within is the entrance to one of Hamburg’s most interesting engineering feats – the St. Pauli Elbtunel. This pedestrian and auto tunnel under the river was built in 1911. It is 24 m (75 ft) below the surface and comprises 2 tubes that connect downtown Hamburg to the shipyards on the south side of the river. What makes this tunnel unique, is that access is by elevator. Four large lifts at each end carry cars, bikers and pedestrians down to the tunnel, and back up again. Each tube also has two walkways making it one of the few tunnels that I have seen where people can walk along next to the cars passing through. 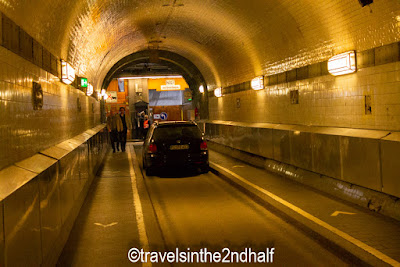 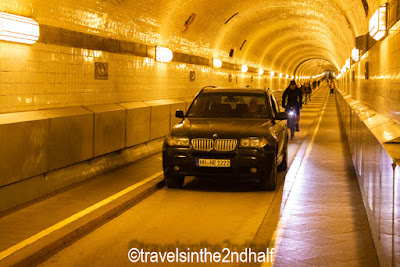 Getting There:
The St. Pauli Pier is at the Landungsbrücken stop on the S1, S2 and S3 subways. There are many tour companies, their ticket booths are along the levee next to the river. Most of the two-hour tours cost about €20.