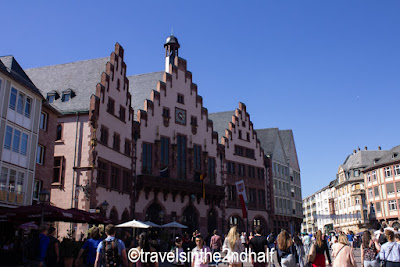 For many years, Frankfurt was near the bottom of the list as a destination for travelers. Sure, you might fly through its airport, on the way to someplace else, but few people who didn’t have business here came to visit. And business was the reason to come. Frankfurt is the home to Germany’s banking and insurance industries, and the view was that there was not a lot here for tourists. But times have changes, and today, Frankfurt is definitely worth a visit.

Like Hamburg, Frankfurt’s history dates back to the Holy Roman Empire. Charlemagne presided over an imperial assembly here in 794 CE. From 1562 until 1792 this was the place where kings and emperors and elected and crowned. Frankfurt started hosting trade fairs in 1150, and in 1372 it was named an Imperial Free City, making it a free-trade zone. Those fairs continue today, and Frankfurt hosts the largest book fair in the world. Frankfurt is also home to Germany’s main stock exchange, which began as a market to standardize currency rates in 1585.

During World War II, Frankfurt sustained major damage from allied bombing. What had been the largest medieval city center in Germany was largely destroyed. That area has been rebuilt, but most of the buildings are modern skyscrapers that serve as the headquarters to the German National Bank, the European Central Bank, Duetche Bank, and other major financial institutions. It was this focus on business and finance that led to Frankfurt’s reputation as a place that was not the time for travelers. Today, the city is working hard to change that reputation.

Frankfurt is home to 30 museums, and 12 of them are within a one-mile stretch of Main River. I took advantage of their proximity to visit three of them in the one day I had available. My first stop was at the Städel Museum. Two hundred and fifty years ago, Johann Friedrich Städel (1728-1816) was a financier who turned his father’s spice business into a bank, lending money to both the city of Frankfurt and the Bishop of Strasbourg. By the time he died, unmarried and childless, he had collected over 500 paintings and 2000 engravings. He bequeathed the art, his house, and his fortune to the city to establish this museum. Its current home opened in 1878 along Shaumainkaistrasse, and this beautiful building houses a world class Pan-European collection spanning from the 14th to the 21st century. One reason I wanted to visit the Städel was an exhibit of works by Peter Paul Rubens. The exhibit was title “Rubens. The Power of Transformation.” Instead of just presenting his work, it focused on how he used the work of previous artists to inspire him. They brought together objects that wrote about and sketched along with his paintings to show the way he learned from what he observed and changed it into something new. A Titian painting inspired him to paint his own version of the same subject, in this case Venus and Adonis; a Greek sculpture that became the basis for the torso of Christ in a painting. This was a fascinating exploration of the way an artist can use the work of another to inspire their best work, and a reminder that even genius has ties to what has come before.


My next stop was at Leibieghaus. This small museum, in a villa along the Main, is dedicated to statuary. Its diverse collection includes statues from throughout the history of Europe, the Middle East and Asia. This past spring and summer the museum hosted an exhibit by South African artist William Kentridge. His work included sculpture, drawings and videos that explore our relationship to time. Spread throughout, he integrated his work with the museum’s.

My final visit was to the Deutsches Filminstituit (German Film Institute). This museum celebrates and explores the world of movies. The top floor hosted an exhibit in honor of the 50th anniversary of the release of “2001: A Space Odyssey.” On display were models and costumes from the film, planning sketches, and scenes from the movie on video. Other exhibit halls showed the development of movie technology. My favorite part was a 20-minute video that featured clips from dozens of movies in order to explore how directors use different methods, visual, and audio techniques. From color to music to special effects, up to three clips at a time are shown to illustrate each topic. It was immersive and fascinating.

All three of these museums are on Shaumainkaistrasse, which runs along the southern bank of the Main River. My visit was on a beautiful Sunday at the Start of May and it felt as if the entire population of Frankfurt had come out to enjoy the weather. The park along the river was filled with picnickers, bikers and families out for a stroll. They had come to bask in the sun after the long German winter. 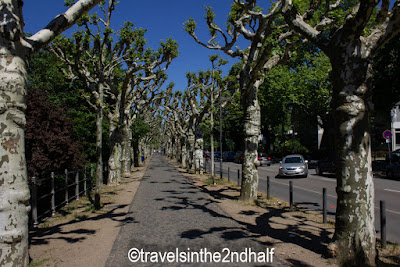 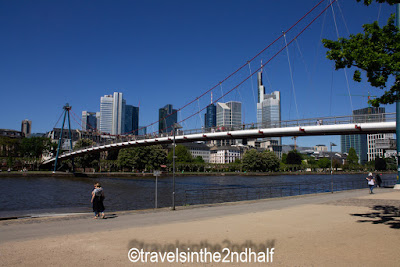 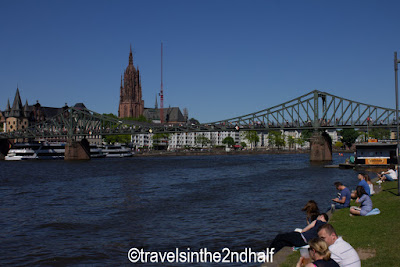 Crossing to the north side of the Main, I walked through the center of the city. This area was almost obliterated during World War II and has been reconstructed, mostly with modern buildings. One exception is Römerberg, a historic market square. Here the new buildings were erected to look like the those that were here before the war. While there was no market going on here, a short walk brought me to Carl Theodor-Reiffenstein Platz where there was a market in session, with crafts and food for sale. I took the opportunity to have a glass of apfelwein, the local hard cider. The kiosk served the drink for 2-euros in a glass, and I got 1-euro back when I returned the glass.
While Frankfurt remains the banking and insurance center of Germany, and of Europe, it has become a destination for lovers of art and culture in its own right. It also serves as a great base for exploring the Main Valley, as I will discuss next week.
Posted by Jonathan L at 10:28 AM