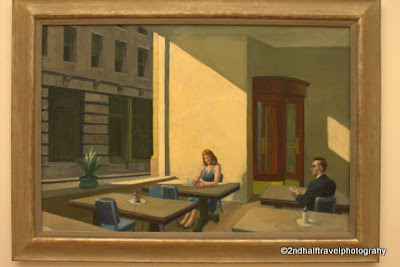 I love art museums. Sometimes the art that I see inspires me to write. Here are some stories that were inspired by three paintings created by Edward Hopper that I found at Yale Art Gallery.

Inspired by Sunlight in a Cafeteria

She loved her table. In a corner by the window, she had lunch here every day. At noon, the sun came in at the perfect angle, and it kept her warm all winter long.

It was a place to escape. She could sit, without being cat-called by construction workers. She was away from the men in the office, who could be too free with there words and their hands. No papers to file or letters to type. Just tume to sit and think.

She thought about her dad, who was living back in Indiana. He was alone on the farm since her mother died last year. He wrote a letter every week, “checking in.” But the subtext was always “when are you moving back home?” He couldn’t accept that the city was now her home. A place where she could be herself, and be by herself. Nobody was in her business, unless she invited them in. He couldn’t accept that she was not going to leave. So every day she came to the cafeteria, sat in her seat and enjoyed the sun and her freedom.


He saw here every day. He loved watching her, lost in her thoughts, enjoying the sun. Where was she from? She didn’t carry herself like someone born in the city. She looked outward, and didn’t seem guarded at all.

At 12:45, like clockwork, she arrived. She always orders the special, and then had a coffee. She watched people passing on the street, but never looked at him. The cafeteria had been an escape for him. Somewhere he could spend his time thinking about his world. Since she started coming, all he could think about was her. Now what could he do? 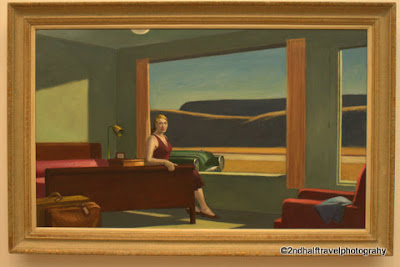 It was a long ride. Driving from Chicago to Los Angeles, back in the days before the Interstate. We took Route 66, you know, like that song by Nat King Cole. But really, that song was a lot more interesting than the actual drive. And much shorter.

The thing is, it was hot. I mean, once you got past Oklahoma, it was all desert, so it was HOT! Mom piled us into the car, three kids and no father. She put a couple of buckets of ice on the floor of the back seat and wrapped them blankets. Eating the ice kept us cool, and as it melted we had water to drink. One less thing to buy as we drove.

We trekked across the deserts of the southwest, Texas, New Mexico, Arizona. Finally we got to the California line. One last night in a motel, one last day in the hot, hot car. Then we would finally arrive in LA, well Pasadena, okay. All I could think about was hitting that beach. I had a lot to learn. 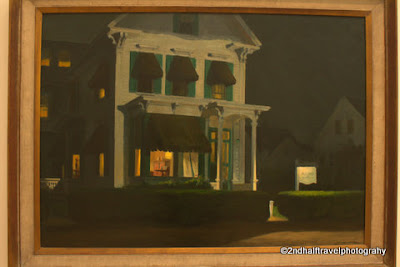 Inspired by Rooms for Tourists

They had never been more than twenty miles away from town, well not since they got marries. He had served in the army after the war ended, but that is a different tale. The point is, they had never been tourists.

When he retired, she was surprised by his plan. “We have this huge house, and no children to visit us,” he said. “We have never wanted to see the world, but I would love to meet it at my front door.” He carried his share of the burden. He got up early to get the breakfast pastries, and did the shopping for dinner. She cleaned the rooms, but he washed the linens.

Together, they invited the world into their home. True, it was mostly people from the city. They came to get back to nature, especially in the fall, when the leaves were changing. They were nice enough. Always polite. Curious about country life, but often condescending to the people who lived in a small town. They acted as if their hosts were “less then.” More importantly, these visitors rarely brought anything interesting to the table. Nothing new to share over breakfast.
About once every month or so, the world would open up to them. Sometimes it was France at their doorstep. Then he would search out croissants for breakfast, and they would get stories about Paris, or vineyards, or Arles. If England showed up she would call the butcher and ask for “whole bacon” for breakfast. Their guests would spend breakfast telling them tales of The Tube, Stonehenge, or Jane Austin’s house. Italians, Germans, even the occasional Japanese, all visited, and they brought the world with them.

Their breakfast table took them further than their wallets ever could. And every night they left the light on. “You never know who might be driving by, looking for a place to spend lay their head.”
Posted by Jonathan L at 5:00 AM