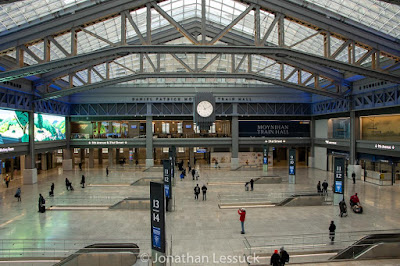 Many years ago, New York City had two beautiful train stations. Grand Central Terminal, which is still with us, and received a major renovation a few years ago, was the terminal station for the New York Central Railroad. The other was Pennsylvania Station, which served the Pennsylvania Railroad. Both were grand architectural celebrations of train travel.

Then, fifty-five years ago, the greed of the real-estate industry wiped out one of them ( almost the other). Pennsylvania station was subsumed under the rationale of using the space above the station to make a profit. So the old building was torn down, and replaced with the latest Madison Square Garden and a large office tower. Travelers and commuters were relegated to a warren of tunnels running underneath the buildings.

For fifty years many people have decried the destruction of Pennsylvania Station. The outcry led to development of “landmark preservation” laws. But, the condition of Penn Station continued to deteriorate for many years. Then, about thirty years ago, a call went up to convert the Farley Post Office Building, which sits across 8th Ave. from the station, to a replacement. The Farley building is the main post office for New York City, but has been mostly empty since USPS opened a large transfer center a few blocks away. In 2006, New York State purchased the Farley Building in preparation for starting construction of the new station. Between 2010 and 2017 work was done to expand the concourses and platforms below ground level. Then in 2017, construction on the new hall began, and on Ja. 1st, 2021 the Moynihan Train Hall opened to the public.
The Moynihan Train Hall, named for the late senator from New York, who fought for funding for the project, occupies what had been the cavernous mail sorting room inside the Farley Building. This allowed the architects to maintain the buildings Neo-classical structures, while creating a modern space for travelers. This is not a “throw-back” to the old days. The hall is sleek, with polished metal everywhere. The open space is covered by iron beams and a glass roof. It reminds me of some of the modern stations that have been built in Berlin, Germany. 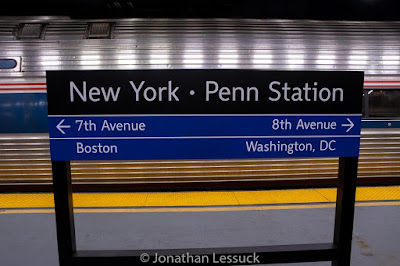 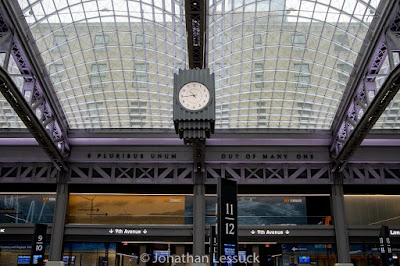 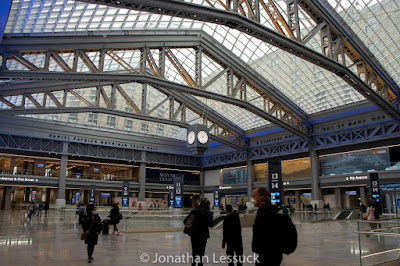 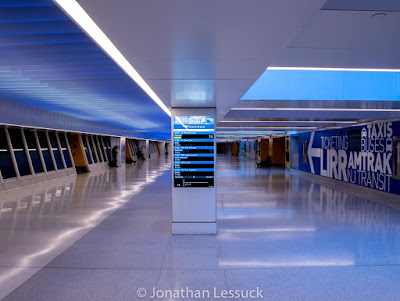 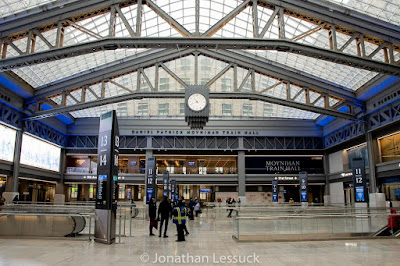 The main entrances to the Moynihan Hall are on 31st and 33rd streets. The 31st street entrance offers direct access to the main floor of the hall. Over the lobby is a beautiful art piece, entitled The Hive. It is a three-dimensional representation of the office towers of New York. It was created by the Scandinavian art duo - Elmgreen & Dragset. 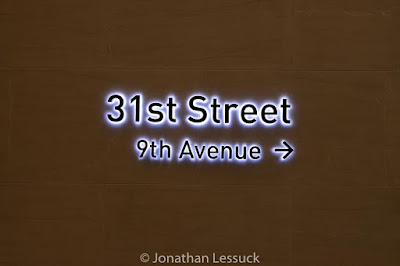 The 33rd street entrance brings travelers to the upper level of the hall. The lobby here hosts three stained glass pieces designed by artist Kahinde Wiley. Titled “Go”, it represents the freedom of travel through the view of African-American youth break dancing in the sky. The upper level, is where there is a balcony overlooking the main hall, and the Metropolitan Club, New York’s Acela club. This is also where there will be a food court opening in the Fall of 2021. 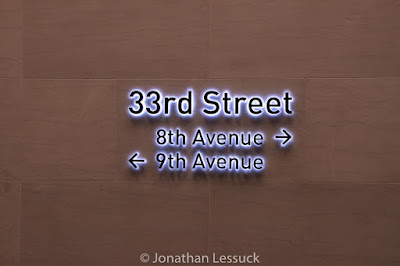 The Moynihan Train Hall will not invoke travel memories from the past. However, it is a wonderful, modern, and much needed upgrade. It provides relief to the overcrowded Penn Station. Most importantly, it gives train travel back the respect it deserves, and makes coming through New York City an enjoyable experience once again. 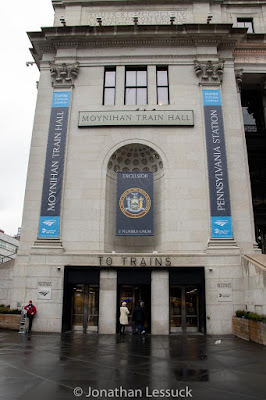 Nuts and Bolts:
Moynihan Train Hall is located in the Farley Post Office Building, at 8th Ave between 31st and 33rd Streets.
Posted by Jonathan L at 5:00 AM