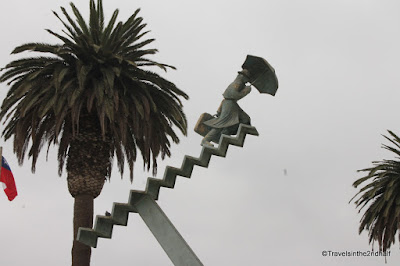 Cruising along the Pacific coast of South America is a very different experience than cruising through the Caribbean. Most ports get only fifteen to twenty ships per year, so they have not developed the support structures that Caribbean ports have. They also have not developed the ubiquitous cookie-cutter shopping areas near the more heavily trafficked ports.

One aspect of many of the stops in South America is that our ship docked in several commercial ports, that is, ports usually servicing commercial ships. This was true when we boarded the Norwegian Sun in Valparaíso, Chile. Valparaíso is the second busiest port in Chile, and the active waterfront stretches for over mile. The passenger terminal is at the north end, and after checking in we had to take a bus through the containers and cranes to the southern end where our ship awaited us. This gave us an up close look at the workings of the port.

Our first stop was in Coquimbo, Chile. Coquimbo is a city of about 165,000 residents, although you would never have known this on the Sunday morning we were there. The streets in the downtown area were mostly deserted. One reason was that the town is still recovering from being hit by a 15 foot tsunami on Sept. 16, 2015. The fifteen foot wave had a devastating effect on the downtown and waterfront area, as you can see from these photos:

Because of the damage to the port we had to take a tender into the port instead of docking, something I try to avoid. I hate waiting on line for the tender, and I the boat ride is usually really bumpy. When I got to shore the effects from the tidal wave was still obvious. The area around the dock was still torn up. As I was taking pictures a couple approached me and asked where I was from. After introductions Pedro Asnudillo and Susana Galleguillos gave me a brief description of the damage caused by the tidal wave. They also expressed how happy they were that tourists were returning to Coquimbo.

Downtown Coquimbo was pretty empty. There is a nice little plaza with a stage and a tribute to Chile’s two Nobel Laureates – Pablo Neruda and Gabriela Mistral. There is also a quaint church just off of the plaza. I walked around the empty Barrio Ingles. This neighborhood is filled with buildings dating back to the 1870’s when a significant population of British immigrants came to support the mining, banking and shipping industries. Unfortunately, the museums that were listed on the tourist map were not open. I gathered that they had not yet recovered from the tsunami. One thing that I really like were the stairways that led from the center of town to the residential areas. They have been given painted themes such as landscapes or funny scenes. 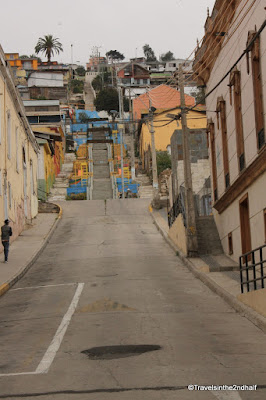 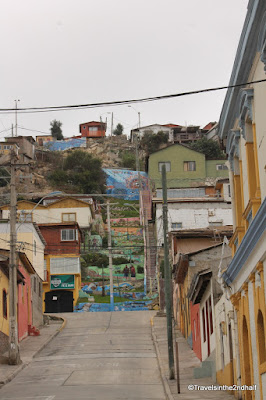 
After a day at sea we next docked at the town of Arica, near the Peruvian border. My first observation, before we even got off of the boat, was that the climate at Arica is very arid. The town is dominated by large hill called El Morro De Arica. The hill is barren and topped with the largest Chilean flag I saw during the entire trip.

Arica played an important role in Chile’s history. Prior to 1879, the area around Arica was part of Peru and Bolivia, but was a major port for shipping out ore from Chilean mines. When Bolivia tried to increase the export taxes on the Chilean copper, silver and gold ore, contrary to a treaty, Chile went to war with Bolivia and Peru. The War of the Pacific lasted four years, but was effectively over when Chile captured Arica in 1880, cutting Bolivia off from the Pacific Ocean and forcing it out of the war. The final borders were not set until 1924, and to this day Bolivia is land locked, and uses the port of Arica to ship its goods, with a Chilean guarantee of free transit.

Today the city of Arica is home to almost 200,000 people. It has several industries, including the processing of fish meal, transportation of goods and the port to support it. Leaving the port area we first entered Plaza Colón. This airy, large plaza hosts a small artisan’s marketplace and is adjacent to the main shopping area of the city. From the plaza it is an easy walk to most of the city’s main tourist attractions. There is a tourist information office just off the plaza and they have a very nice walking tour available in several languages. You might want to take a taxi up to the top of Morro de Arica as it is a climb of 139 meters. This fort was at the center of 1880’s battle. 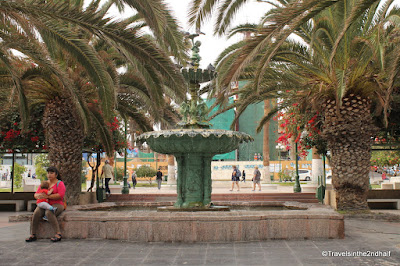 Another interesting site is the Museo de Sitio Colón 10. This museum sits over the burial site of the Chinchorro people dating back 10,000 years. The site was discovered while renovations were being carried out on a house at this address, and after it was determined that the site was not stable, they built the museum around it. An interesting, if not eerie feature is that the Chinchorro mummies have been left in situ with a clear Plexiglas floor protecting the remains. Visitors are encouraged to walk over the bodies and examine their burial up close. 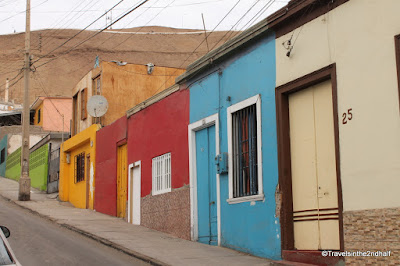 Two other interesting sites to me are the San Marcos Cathedral and the Aduana (customs) building. These buildings are particularly interesting because they were designed by Gustav Eiffel of the French tower fame. He had developed a business of designing prefabricated buildings, creating the pieces in France and then shipping them to other places where they were assembled. Unfortunately the San Marcos Cathedral was undergoing major renovations when we visited.

The neighborhood just north of the plaza is a very active shopping area. This is the center of commercial life for Aricaños. Calle 21 de Mayo has been turned in to a pedestrian mall and it was alive with people out shopping and eating. There are many good restaurants along this stretch. One place I went to was a store that sold school and office supplies to replenish a few things for keeping our journals, so in I went. Shopping there involved a different process than I was used to. I entered the store and everything was either on shelves of under a glass counter. Taking a number, I waited my turn. Meanwhile I looked around the store to figure out what I wanted. When it was my turn a very nice young lady helped me with my order, and then gave my total to a gentleman behind the counter. He rang up my bill and took my money. I then gave my receipt to the person who helped me and she gave me my supplies.

Visiting Arica gives you a feel for life in Chile. They have been able to build up a tourist industry without losing their identity.