It is rare that I get to a new city and feel instantly at ease, but that is exactly what happened when The Amazing Ms. D and I got to Santiago Chile. It might have started at the airport, when the ride that was supposed have been arranged by our hotel did not show up. We immediately had three people helping us – the person who was pushing The Amazing Ms. D’s wheelchair (she was still recovering from knee replacement surgery) and two people who worked for Holland American Cruise line. We were given a phone to use, and the woman from Holland America Cruises yelled at the clerk from our hotel. We were then directed to a booth where you can pre-pay for a radio cab into the city. The cost was about $25, half of what the hotel was going to charge us.

It might have been the Hotel Oporto Boutique, where we spent our three days in Santiago. This very nice hotel occupies two buildings in the residential Providencia neighborhood. Because the hotel is comprised of building that used to be private homes the layout of the room was a little funky (the shower was separate from the sink and toilet) the king size bed was comfortable. Up front was an excellent restaurant that was really a meeting place for many people who lived in the area. There is a bus to the Metro at the corner and one to downtown Santiago two blocks away.

I know that one reason I fell in love with Santiago is that it is easy to get around. In addition to a subway system that it is in the process of expanding, Santiago has an extensive bus system with frequent service. And all for around $1/ride. In fact I felt very safe using public transportation. It was obvious that buses and trains were not just for the poor, but that they were used by everyone. Santiago is also a very walkable city. It has many distinct and architecturally different neighborhoods.

Providencia – This is a somewhat middle-class residential neighborhood. It sits in between the center of the city and the very upscale neighborhood of Las Condes. Many of its older homes have been turned into offices and there are many apartments/condos in the area. There are several shopping areas, the biggest being the Costanera center – a 6 story mall that sits at the bottom of the tallest building in Latin America.

Bellavista – Technically part of Providencia, this small barrio is called “bohemian” but is really a place to come for restaurants and night clubs. It is also home to Santiago’s Zoo, Cerro San Cristobal and La Chascona – one of Pablo Neruda’s homes. La Chascona is actually three buildings built on the side of Cerro San Cristobal which rises 300m above Santiago. Neruda built the house in 1953 for his lover Matilde Urrutia. The house was severely damaged in 1973 immediately following the coup that overthrew the elected government of Salvador Allende. The grounds and houses are beautiful and Neruda was a collector of things throughout his life, and the buildings are filled with objects that portray both his love of arts and crafts and his sense of humor. Unfortunately I was not allowed to take pictures inside the house.

Cerro San Cristobal sits towering over Bellavista. 300m (1500ft) tall, the easiest (and most fun) way to the top is via the Funicular Santiago which was built in 1925. From the top the Cerro all of Santiago spreads out below, and the views are magnificent. Take the time to sit and enjoy them. You also might want to enjoy a cup of mote con huesillos – a large cup of peaches and wheat berries served in liquid made from cooking dried peaches with water, sugar and cinnamon. Also at the top of the Cerro is The Sanctuary of the Immaculate Conception with a 22m statue of Mary and a chapel dedicated to the “Motherhood of Mary” 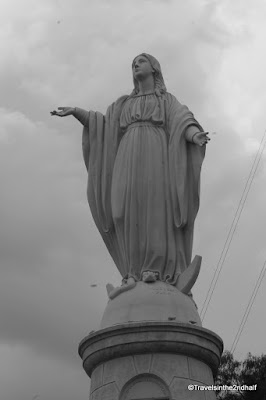 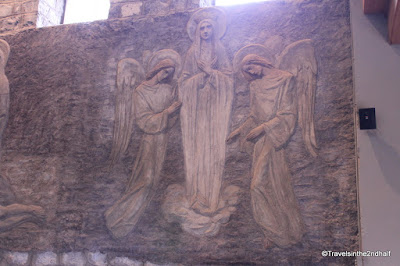 Barrio Brasil – One of things that I really like about walking around Santiago is the street art. The government coordinates between building owners and artists to fill the blank walls around the city. This was really evident as I walked around Barrio Brasil. This older neighborhood is filled with classic buildings and beautiful modern street art. It was an upper class neighborhood in the late 1700’s. Today they are fixing it up again, and rebuilding it as a cultural center, with restaurants and art spaces, especially along Ave. Brasil. 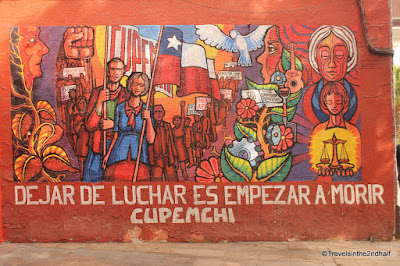 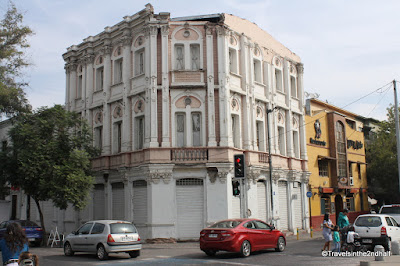 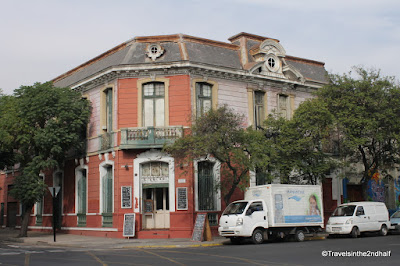 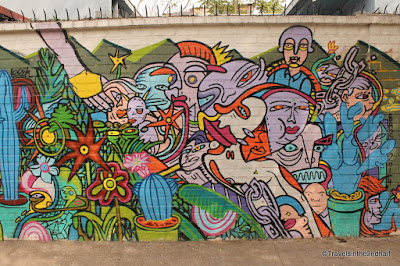 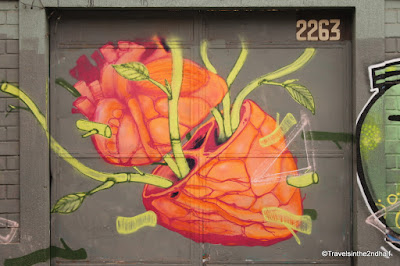 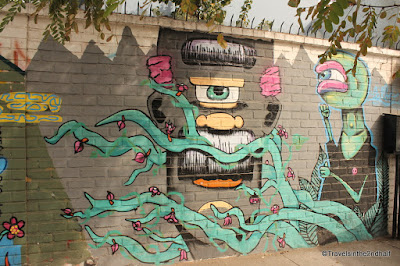 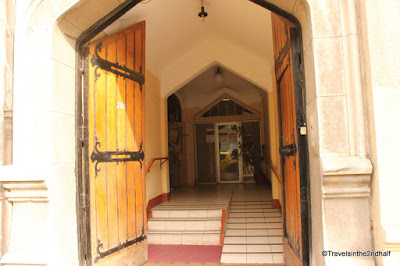 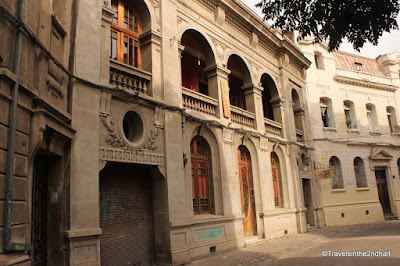 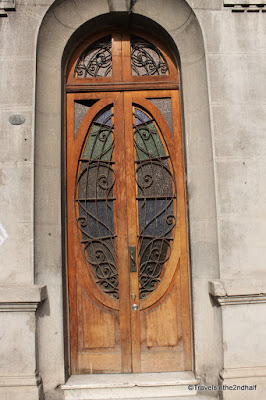 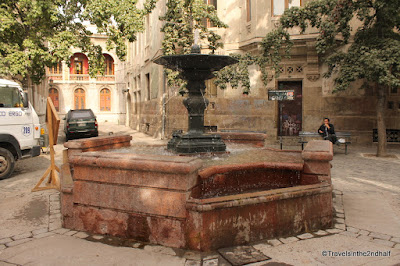 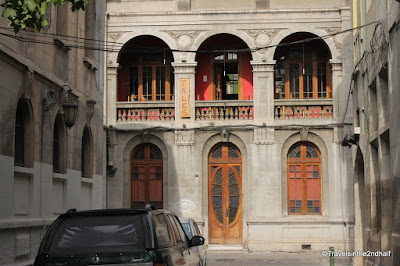 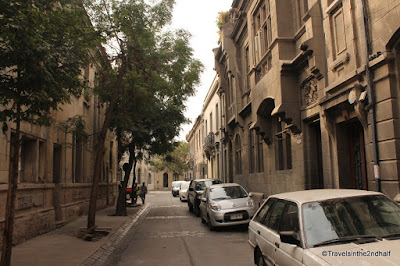 Here are some more examples of street art in Santiago: 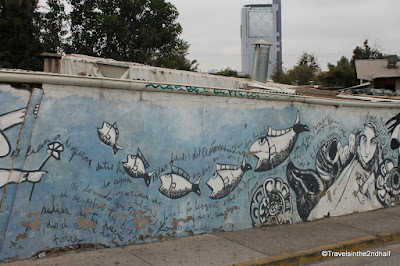 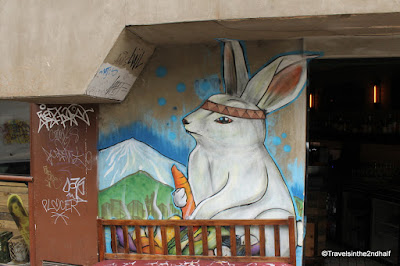 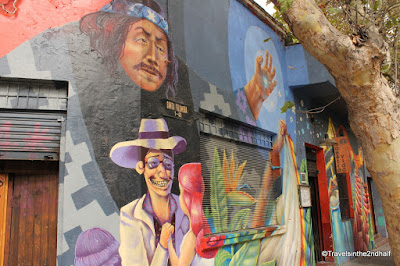 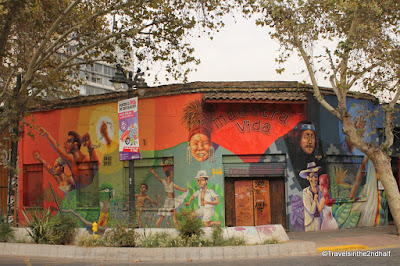 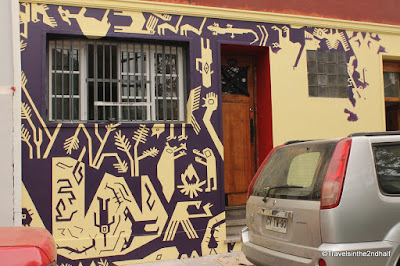 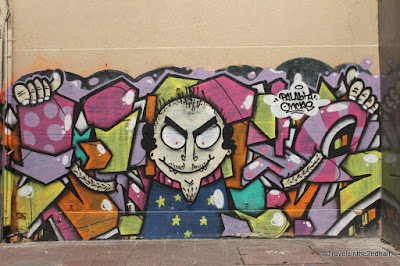 As I said, I really loved Santiago. It reminded me most of Barcelona. I felt comfortable and safe. I felt that there was a real sense of place and history, along with a view of building towards the future. Old and new living side by side. My only regret is that I did not have the time to see everything that I was interested in seeing, so I guess I will have to go back.
Posted by Jonathan L at 4:30 AM