Having spent three days Santiago Chile, we moved on to city of Valparaíso. Valparaíso is a beautiful city built along the hills that come down from the Andean plane to Pacific Ocean. The most striking thing about this city is the wide variety of colorful little houses built on the sides of the hills. They make Valparaíso an extremely beautiful and unique city.

Valparaíso was settled by Spanish explorers in 1536 and remained a small town until 1810 when the first pier in South America was built there. Its importance grew during the mid-1800’s when it became a major port for those heading to California during the Gold Rush. The city also became home to significant populations of immigrants from England and Germany. Isabel Allende’s novel A Daughter of Fortune delves into this period of history. Valparaíso continued to serve as a major port until the opening of the Panama Canal in 1918. Today it has again become a major port shipping out copper and fruit and servicing ships that are too large to pass through the Panama Canal.

Its history and the fact that it has survived several major earthquakes has allowed Valaparaiso to maintain its 19th and 20th century charm, making the city a UNESCO World Heritage site and a really fun place to walk around. At the foot of the hills is the downtown or Puerto area. This was the heart of the shipping, commercial and financial city. The port is here, and active. So are the major banks, and this neighborhood also serves as the major shopping hub for residents of the city. One way to see the downtown area is to take a ride on the electrotrolley, a set of buses, many of which date back to the 1970’s, that run from one end of the area to the other. For a price of 270 Chilean Pesos (about 45 cents) you can ride the length of downtown Valparaíso and get a real feel the people who live and work there.

What makes Valparaíso unique is the way it has been built onto the hills. Many of the houses are painted beautiful bright colors and they grow down the cliffs rather than up. Residents and visitors travel up and down these hills using the 27 ascensores or elevators. These funiculars were built in the early 1900’s and are still running today. When we got on to one our first day in Valparaíso, The Amazing Ms D. asked one of the people who worked there if it was safe. “Well, it hasn’t fallen yet” was the response.


We stayed our first night at The Yellow House BnB. Situated at the west end of town on the Cerro Artilleria, near the Naval Museum. Owned by very welcoming Maria, this BnB is built on the side of hill, with a wonderful view of all of Valparaíso. The rooms and the house are not fancy, but Maria and her family give The Yellow House are very welcoming and a homey feel. You enter the house on the top floor, and the rooms look out over the city. We had a wonderful space to watch the city work during the day, and to really enjoy the lights of Valparaíso at night.The other floors extend down from that floor. Unfortunately hills were too difficult to walk on for The Amazing Ms D. who was recovering from knee replacement surgery. So we changed to the IBIS hotel, which sits right outside the port in the downtown area, and over the train station.  The Ibis is a discount hotel (about $60/night) that was clean and convenient. Our room was large, although sparsely furnished. The only drawback was the noise from clubs across the street, which penetrated our room until 1 AM. One thing that I enjoyed at the IBIS was that our window looked into the port. It was fascinating to watch the ship traffic and loading and unloading going on. I loved sitting at our window watching the freighters entering and exiting the port. Or watching the unloading of several bulk freighters, the rhythm of the cranes as the repeatedly pulled what I think were steel plates out of the hole over and over again. 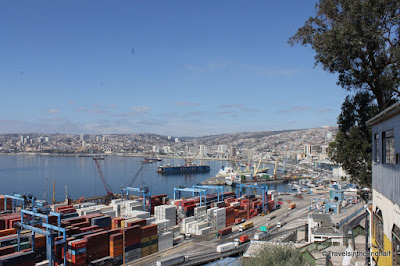 One day we took the Ascensor Concepcion up the hill to Cerro Concepcion. This area is filled with workshops, restaurants, galleries and upscale homes and souvenir shops. Most of the other cerros are homes to the working people who make Valparaíso run. 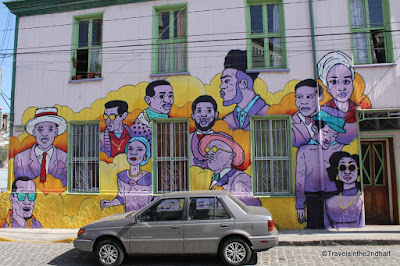 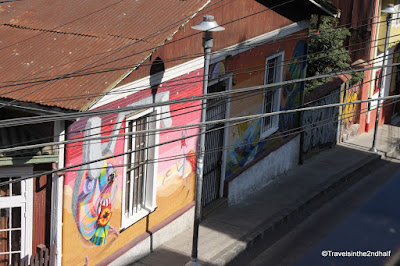 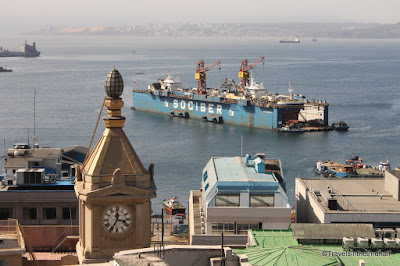 When you come to Chile make sure that you book 2 or 3 days for Valparaíso. It is worth the trip. It is a fun place to walk around, if you can handle the hills.
Posted by Jonathan L at 4:30 AM