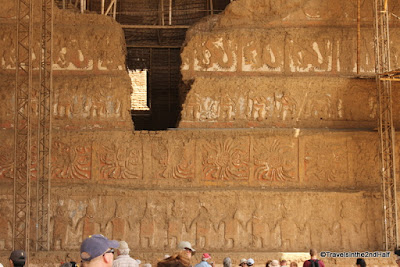 Leaving Lima, our cruise next stopped at the port of Salaverry, just outside of Trujillo Peru. We had arrived at a true desert, with an average yearly rainfall of about 3mm. Salaverry is another active freight port, and the town has an active fishing industry. When I went out to our balcony to look around I noticed a lot of people and tuktuks on a nearby pier. At first I thought they had come out to look at the docking cruise ship. But further investigation showed that they were there to buy the haul from the local fishermen. 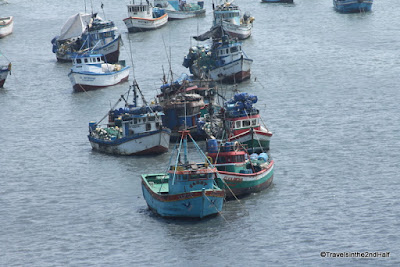 The main attractions in Trujillo are the thousand-year -old temples from the Moche people. The Moche civilization existed in what is today Northern Peru from 100 AD – 800 AD. They were an agricultural society who existed in a desert by building a series of canals to bring water down from the Andes Plain. Many of those canals are still in use today. The drive from Salaverry to the temples passes through an active farming community with an irrigation canal along the side of the road.

Huaca del Sol (Temple of the Sun) and Huaca de la Luna (Temple of the Moon) sat at opposite ends of city called Cerro Blanco, the nearby volcanic peak. The Huaca del Sol was severely damaged by looting Spanish soldiers during the 1700’s, but the Huaca de la Luna was buried by the Moche and seems to have escaped much damage. Today it is an active archeological dig, and in very good condition. The temple contains several levels that were built over successive centuries. It was a place of ritual battles and sacrifices.

Visiting the Temple of the Moon is not an easy walk. As I said, this is a desert climate, hot and dry. The entrance to the temple is at its highest level, so it is a somewhat steep walk up the side of the mountain from the bus parking lot. The gain in height is probably about 100 feet (33m).  The guide on baird the ship listed this trip as a 2 out of 3 in strenuousness, and that was pretty close. Several people we spoke to afterwards had to stay in their bus as they could not do walk up and down the hills and ramps.

The temples are made from adobe bricks, and they reminded me of the many abandoned villages, like Wupatki in Arizona. Most of the temple is covered by a roof to protect to the excavation from the sun and wind.  Once inside we saw the benefit of having buried the temple – the carvings on the walls were very well protected. They were so protected that we could still see the original coloring. 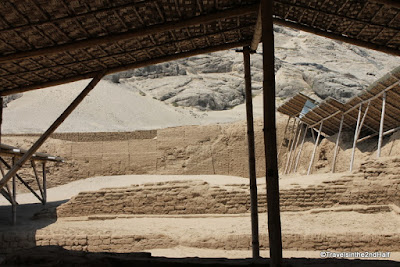 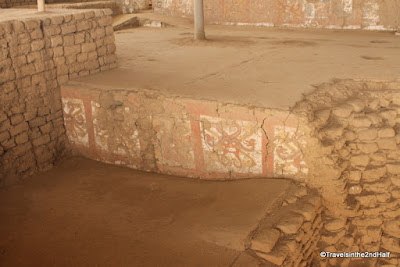 After walking around the highest level of the temple, and having a good look out across the plain to the Huaca del Sol, we walked down to the side of the exterior wall. Here we could again see the different carvings and decorations that were created as the temple was built. It was truly awe inspiring to stand at the bottom of the wall. Very similar to standing at the bottom of the Parthenon or the Roman Coliseum. There is spirit of place, a feeling of being someplace so ancient and so important to the society that created it. I stood in the shadow of this 100 foot tall wall, covered from bottom to top with hundreds of carved icons. It took my breath away, but I really could not imagine the kind of awe that must have been felt by the Moche people 1500 years ago, or the people they defeated, who were brought to this temple to be sacrificed.

Trujillo Peru was founded in 1534 as a base for Spanish conquistadors. The Spanish chose this site because it was near several Chimu settlements, and the Spanish formed an alliance with the Chimu against the Inca Empire. Trujillo was also the first city in Peru to claim independence from Spain, in 1820. Today Trujillo is the second largest city Peru with close to one million people in the metropolitan area. 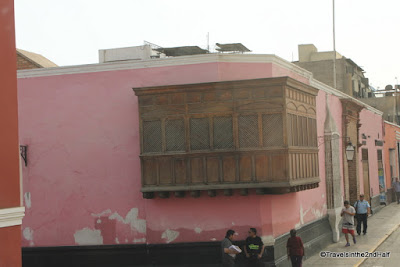 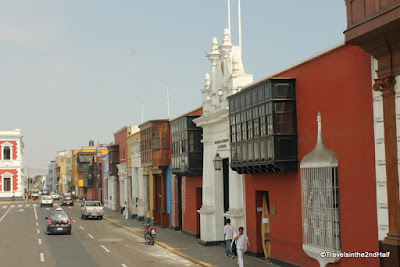 The area around Trujillo produces sugar cane, rice and asparagus using the same canals that were built by the Moche people close to 2000 years ago. Most of the buildings in the center of town were built in the late 18th and early 19th century. This includes the house that today is home to the National Bank of Chile, on the Main Square, Casa Urquiaga. This was a very typical Spanish-style home. We entered into a courtyard, and then passed through two visiting rooms to an inner patio. Around the patio were the family’s bedrooms and dining room. Further back were the servant’s quarters and the kitchen. This house was also the governor’s home and home to Simon Bolivar during the struggle for Peru’s freedom from Spain. 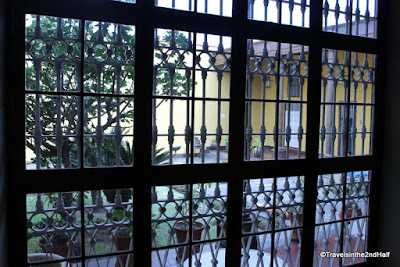 The main plaza itself is a nice enough public space. There are lots of trees for shade. But it was nothing special. Unfortunately we did not have time to really explore the center of Trujillo. The Temples here are must see in my opinion. In fact, we will be coming back to Peru. There is a lot to see here, from the Moche and Inca ruins and people to the modern history of Spain and Peru today. We need much more than the two days ashore we had on our cruise.