The Real NYC #29 - Visiting the Metropolitan Museum of Art 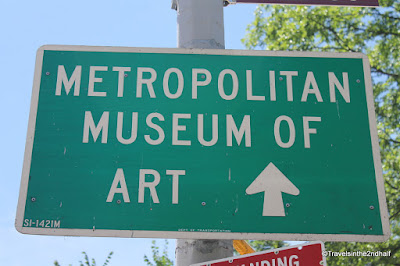 One of the things that I love about living in New York City is wide variety of museums in the city. There is something for just about everyone, from history (NY Historical Society) to film (Museum of the Moving Picture) to mass transit (NYC Transit Museum) to art (way too many to mention). The grandfather of them all, the elephant in the room, is The Metropolitan Museum of Art.

The Met was incorporated in 1870 "for the purpose of establishing and maintaining in said City a Museum and Library of Art, of encouraging and developing the Study of the Fine Arts, and the application of Art to manufacture and natural life, of advancing the general knowledge of kindred subjects, and to that end of furnishing popular instruction and recreations" (Disturnell, John New York As It Was and As It Is).  Over the past 146 years the Met has developed one of the best collections of art in the world, a collection that brings together examples of the best fine and decorative arts from all corners and cultures of the world.

Such a collection can be overwhelming. The museum is ¼-mile long and occupies over 2 million square feet of space.  Its building consists of 20 different structures that have been built to hold its ever growing collection. There are so many choices of things to see, it is just impossible to see and enjoy all that the Met has to offer in one visit. So here are my tips if you have just one day.

Take pictures on the steps, but don’t use them to enter!

The front steps of the Met are iconic, a New York stoop on steroids. The steps are a great place to sit and people watch. Take pictures. Ask strangers to take pictures of you. Enjoy a snack. But don’t enter the museum at the top of the steps. The visitor's lines inside are really long. Instead, go to the school groups/handicap entrance, just to the left of the steps (as you look at the entrance). This little used entrance takes you into the ground floor, where the lines for coat and bag check are short, and so is the ticket line.

The Met is a “Pay what you want” museum

Many museums in New York City have broken the $20 barrier in admission price. The Met’s sign seem to ask for a $25 admission price, but look carefully, because in small print it says – SUGGESTED ADMISSION. And it is just that. You have to pay something, but you pay what you want. Think about your budget, and give what you feel you can afford. But if you use the “express ticket” machines they will only accept the full suggested admission price.

Take the time to plan your visit

The Met has a huge collection. And it has special exhibits. It also has a great web site. Take the time before you go to plan out what you want to see. I would suggest 30 min – 1 hour for each gallery or exhibit you choose. This gives you time to really enjoy the art you visit. So, if you have 3 hours, pick the three to five exhibits that you are most interested in. And don’t worry, you will see a lot more, as you walk from one gallery to the other.

On a recent visit to the Met I chose two special exhibits. The first was Court and Cosmos an exhibit of art from the Seljuq dynasty of Turkey during the 11th to 14th centuries. Court and Cosmos includes beautiful examples of stone statues, relief work, tapestries and ceramics that have been organized to explain different aspects of life under the Seljuq rulers. Divided into topics such as “Science, Medicine and Technology” and “Religion and Literary Life,” the exhibit connects the themes of different aspects of life with the art and tools that have survived to today. This is a fairly large exhibit, filling one of the Met’s largest galleries, and I spent about an hour enjoying the pieces. Court and Cosmos will be at the Met through July 27th. 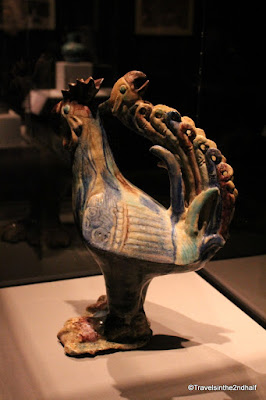 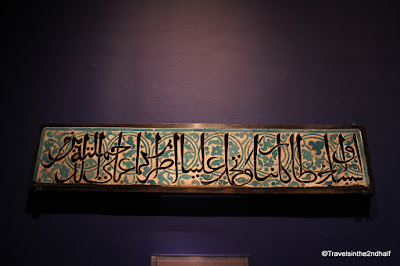 The other exhibit I went to was Turner’s Whaling Pictures, a show of 4 paintings by Joseph Mallord William Turner. Turner was a British landscape painter who worked during the first half of the 19th century. These four pieces were among the last paintings of his life. This exhibit is the first time in over 50 years that all four of his whaling paintings have been shown together. As a fan of Impressionism, I really like these paintings. Even though they were painted during the years of 1849-1851, they have the feel of the Impressionist painters who dominated the European art world 40 years later. Turner’s Whaling Pictures will be at the Met through August 7.

During this visit I spent about an hour and half in the exhibit halls. I also saw a few quick things walking from on hall to the other. One other advantage of using the school groups entrance is that this is where the museum has placed its discount book store. For prices ranging from $1 to $25 there was a wide range of books and catalogs from past exhibitions. 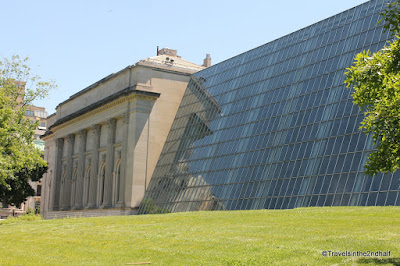 Getting There – The Metropolitan Museum of Art is located on 5th Ave, between the 79th and 86th street transverses of Central Park. The #6 train stops at 77th street and 86th street on Lexington Ave. (3 blocks east of 5th Ave). The M
1, M2, M3, and M4 buses stop right in front of the museum on their downtown routes, and one block away on Madison Ave on their uptown routes.

Cost – The suggested admission is $25 for adults, $17 for seniors and $12 for students, HOWEVER THESE ARE SUGGESTED ADMISSIONS. If you buy your ticket at the desk you may pay what you want/can afford. One other note, eating at the Met is expensive, but so is eating in its neighborhood (the Upper East Side). If weather permits I suggest bringing sandwiches and having a picnic in Central Park. You can check your bags for free at the Museum, just don’t bring a cooler.
Posted by Jonathan L at 4:30 AM