The Real NYC #34 - The Whitney Museum 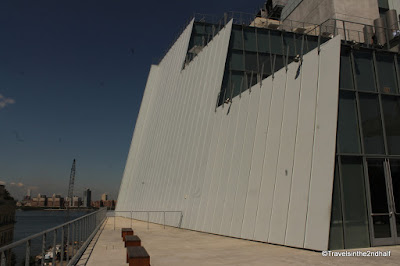 One of my favorite smaller art museums in New York City is the Whitney Museum of American Art, dedicated to modern and contemporary art by American artists.  There are several reasons that I like The Whitney. First, the museum is just the right size to enjoy completely in one visit. It is not too small that you wonder why you came, nor so big that you feel rushed. Second, it has an excellent and eclectic collection of 20th and 21st century American Art. From Ashcan to Abstract Expressionism, from Pop Art to Post-minimalism, The Whitney’s collection is extensive, and its curators look for interesting ways to display it.

The Whitney was founded in 1931 by Gertrude Vanderbilt Whitney. Originally housed in a townhouse on 8th Street in Greenwich Village, it moved to a building on Madison Ave designed by Marcel Breuer and Hamilton P. Smith. The Whitney’s Collection quickly outgrew its space and by the 1980’s The Whitney had set up satellite galleries in the lobbies of several office buildings around New York City. In 2010 The Whitney obtained a parcel of land on Ganesvoort Street in the Meatpacking District and commissioned Renzo Piano to design a new space for its collection.

The Whitney’s new home, which opened in May of 2015, is a beautiful mix of indoor and outdoor gallery space. The indoor galleries are among the largest open space galleries in New York. Built without vertical beams, the curators have the option of arranging the walls in whatever manner they deem best to display the work for a particular exhibition.  Mr. Piano also uses the museum’s location in Manhattan to full advantage. With windows on one side and terraces on the other, the building pulls your vision out from the museum to views of the Hudson River on one side and Manhattan on the other. Here are some of the views from the terraces and windows of the museum. 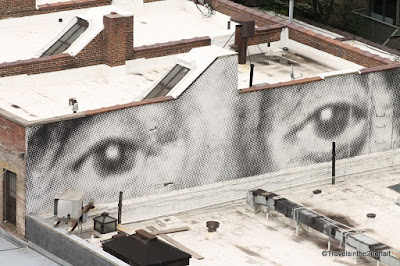 Two floors of the museum are dedicated to The Whitney’s permanent collection. At the time of this writing, the focus is on its portraiture collection, titled Human Interest: Portraits from the Whitney’s Collection. This exhibit, drawn completely from the Whitney’s collection, spans from the early 1900’s to the early 2000’s. It includes paintings, photographs and sculpture. One of my favorite pieces of the entire Whitney collection is included in this exhibit – Dempsey and Firpo by George Bellows. Now I am not a huge fan of contemporary and conceptual art, but I also like the statue Julian Schanbel by Urs Fischer. The life sized candle is lit every day and is allowed to burn down, changing as the wax melts, drips and burns. Human Interest will be on exhibit through Feb 12, 2017.


The Whitney also runs special exhibits. Right now there are shows of works by Stuart Davis and Danny Lyon. Davis was an American painter whose work is a mix of cubism, abstractionism and pop art. Lyon is one of the preeminent American photographers of the past 50 years. His work chronicles his travels around the country including his involvement with the Civil Rights movement of the 1960’s, and the Prison Reform movement of today.

The Whitney sits at the southern end of the Highline Park. So a visit to the museum can be followed by lunch and a walk along the Highline. All in all a really fun way to spend a day in New York City.
Posted by Jonathan L at 4:30 AM