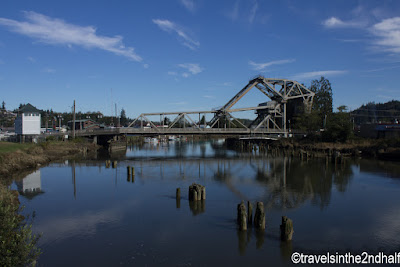 Having spent a week in and around the Olympic National Park, it was now time to head south, and explore the Washington Coast. My travels were now taking me to Aberdeen Washington.

Aberdeen is a small city of around sixteen thousand residents, sitting on the shore of Grays Harbor. Grays Harbor is a natural bay and protected bay that is 17 miles long and up to 12 miles wide. The first European exploration of the inlet was in 1792, led by Captain Robert Gray. Permanent European settlements were established in the 1870’s as the logging industry moved from east to west and began to grow in the area. Aberdeen and the neighboring towns of Hoquiam and Cosmopolis became the center of the logging industry during the early 1900’s with 37 sawmills at its peak in 1930. Unfortunately, the Depression took a toll on the lumber business, one from which it never fully recovered. Today, while timber is still important, the area also depends on commercial fishing, tourism and regional services for employment. 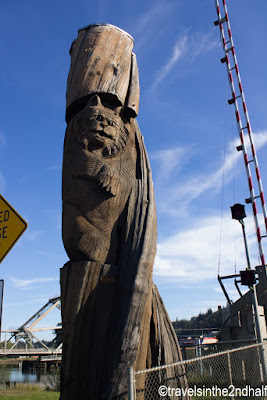 I stayed at the Guesthouse Inn and Suites, which is an inexpensive motel on the main drag through Aberdeen. I had a comfortable room in a place that was close enough to the center of town to make walking to restaurants possible. However, Aberdeen, like many older industrial towns, has a downtown that can feel very deserted, especially at night. But there is a move to bring people back to the area in the evenings by offering good dining choices. I can recommend two restaurants downtown. One is Amore Pizza and Pasta, which offer very good traditional Italian food. The other is Rediviva, which offers a modern foodie menu, but very well done. Rediviva also played a fantastic collection of songs as I ate. For an afternoon snack I strongly suggest Scoops Ice Cream. Located in a repurposed service station on US-101, they serve excellent coffee, ice cream, baked goods and other treats.

While in Aberdeen I visited two places to explore the history of the area. The Aberdeen Museum of History, which is located in an old armory that has been converted into a combination museum and social service offices. The museum presents a comprehensive look at life in Greys Harbor over the past hundred and thirty years. Its collection includes three lovingly restored antique fire engines. There are also recreations of several store fronts including the train depot, a general store and an auto repair shop. There is also a tribute to Kurt Cobain, who was born in Aberdeen, and lived in the area before moving to Seattle and founding the band Nirvana. The staff, mostly volunteers, are extremely helpful and friendly, taking the time to give me a personal tour of the facility.

My other visit was to The Polson Museum. This historic mansion is in the town of Holquiam, just to the west of Aberdeen. It is a 16-room building, built in 1924 for F. Arnold Polson and his new bride. Mr. Polson was the scion of the Polson Logging empire. The Polsons owned twelve logging camps up in the mountains, two sawmills in town and their own railroad line to bring timber from one to the other. The family lived here until 1965, when they moved to Seattle. The house was donated to the city of Holquiam in 1976 and has been a home to many donated historical items since then.

The first floor is a space used for exhibitions. During my visit there was a show of photographs of loggers from the 1960’s and 70’s, working at their jobs. Upstairs, the rooms are filled with the bric-a-brac of life. Clothes, dolls, high school yearbooks, newspaper clippings, and just about anything else you can think of. All of these are arranged in themed rooms. The grounds also have a rose garden and an equipment shed that is home to some classic pieces of logging equipment and railroad engines. 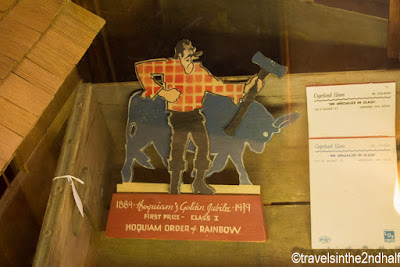 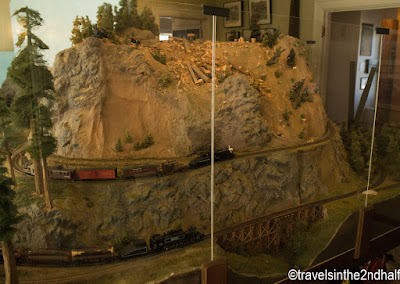 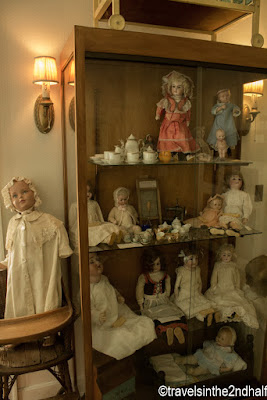 Aberdeen is at the heart of the logging industry, and has been for over one hundred years. It is an interesting place to explore the history of Pacific Northwest. But the area has more to offer – Next week: visiting Grays Harbor – What lies beyond the town.

Note – Grays Harbor does NOT have an apostrophe. It did originally, but at some point, it was dropped. No one could definitively say when, or offer a reason why.