One thing that my trip to Berlin showed me is the effort that Germany has made to come to terms with its past. Instead of hiding it or saying “that was long ago and people need to get over it,” they have put is issue of National Socialism out front and discussed the effects of Nazi rule. Last week we explored some of the smaller and lesser known memorials to the victims of fascism. However, no trip to Berlin would be complete without also stopping to see the larger, more prominent memorials.

The Red Army Memorial in Tiergarten

Walk about 450 m (0.25 miles) west from the Brandenburg Gate, along Strasse des 17 Juni and you will arrive at the Red Army War Memorial. There are two other memorials to the 80,000 members of the Red Army who died during the Battle of Berlin (April-May 1945). 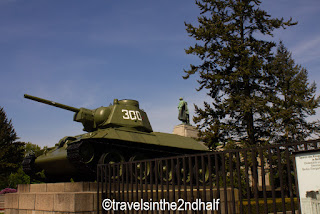 The Battle of Berlin was the final battle by allied troops to defeat the Nazis. This tribute was built shortly after the Red Army captured the city and was dedicated on 11 Nov. 1945. Over two thousand soldiers are buried at this site. The curved stoa is flanked by two Soviet tanks and two 152-mm howitzer guns. It is topped by an 8m (25 ft) tall statue of a soldier. 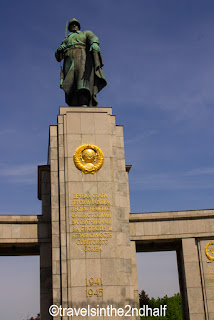 It has a plaque that reads “Eternal glory to the heroes who fell in battle with German fascist invaders for the freedom and independence of the Soviet Union 1941-1945.” Surrounding the memorial are manicured gardens and the former guard house has been turned into a museum. One word of warning, this was the only place in Berlin where I was actively accosted be scammers who were trying to get me to “donate” to a cause, and who might also have been pickpockets. 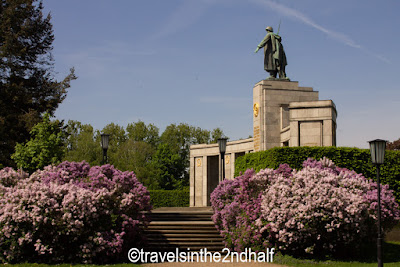 Memorial to the Sinti and Roma Victims of National Socialism 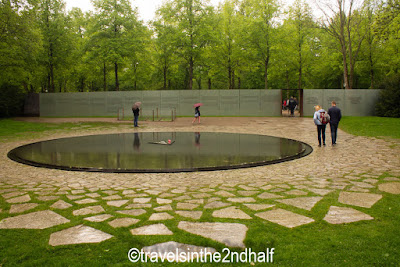 Staying in the Tiergarten, not far from the Soviet Memorial, is the Memorial to the Sinti and Roma Victims of National Socialism. The memorial is along the path that leads from the Reichstag to the Brandenburg Gate. 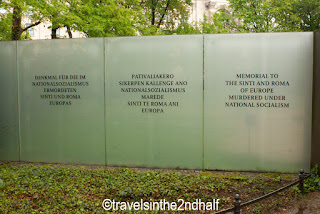 Outside the memorial are glass panels that show the chronology of the attacks on the Sinti and Roma peoples under rule of the Nazis. When you enter the memorial you will find a circular reflecting pool with a triangular stone in the center. Its shape represents the triangle patches that prisoners were required to wear at the Nazi concentration camps. Every day a fresh flower is placed on stone in the center of the pool. The edge of the pool is etched with the words to the poem “Auschwitz” by Santino Spinelli:
Gaunt face
dead eyes
cold lips
quiet
a broken heart
out of breath
without words
no tears 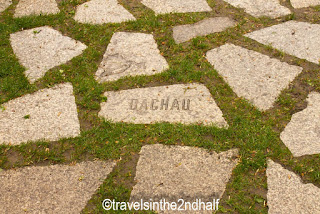 The pool is surrounded with stones, some of which bear the names of the concentration camps that victims of the Nazis were deported to, and where they were murdered. In some ways, this memorial is similar to the Viet Nam War Memorial in Washington D.C. It is away from major streets, and it is very quiet, a place for contemplation. Come here to reflect on those who were killed and the on the history and horror of fascism.

Memorial to the Murdered Jews of Europe 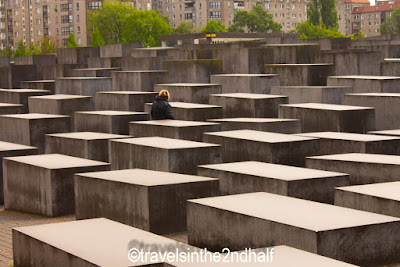 This brings us to the Memorial to the Murdered Jews of Europe. This 19,000 m2 site is a memorial in two parts. On street level there are 2711 concrete stelae. Each one is 2.38 m (7’10”) long and 0.95 m (3’1”) wide arranged in a grid pattern over a sloped hilly field. At the edges of the field the stelae are short, starting at around six to ten inches tall. 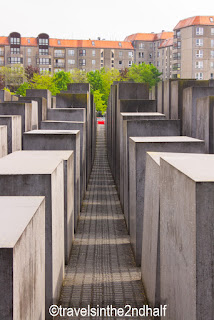 Walk among them, they grow larger as you move toward the center of the field, until they tower overhead, 4.7 m (15’5”) tall. At first, I was unsure about this monument, but as I walked through, my impression changed, and my appreciation grew. The concrete towers surround you and a feeling of isolation begins to set in. Your only views are along small, straight alleys, that stretch into the distance. Everything else is blocked off. As you pass the corner of one block you might get a quick look at another person, or a passing car, but they disappear as you continue on. Instead you are given the opportunity to explore your thoughts without interruption by, or impressions of the outside world. 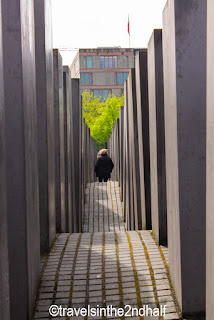 The memorial was designed by Peter Eisenman, an American architect. He has written that his aim was to represent a seemingly ordered system that has lost touch with human reasoning. The memorial has generated both positive and negative reviews. I went from sceptic to convert during my visit. But the street level stelae is only half the memorial.

Halfway along the eastern edge of the field is a stairway that you might miss if you didn’t look for it. It leads down to the “Place of Information.” This subtly named part of the memorial is really its heart. It is here that you have the chance to explore the history and effect of the holocaust on a very personal level. 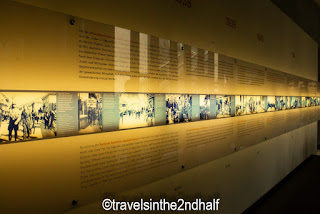 The exhibit begins with a timeline that lays out the rise of National Socialism and the persecution of the Jews. Among the many important facts included is one that often gets lost. Only half of the victims of the Nazis lost their lives in the concentration camps. The other half were murdered by the Einsatzgruppen, roving squads of SS troops who carried out mass killings throughout the lands controlled by Germany. These murders took place in and around towns where the victims lived, showing the lie to those who claimed that they “didn’t know what was happening.” 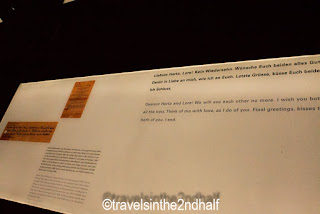 After the timeline, you enter a room where the floor is covered with back-lit displays. Each one gives an example of personal correspondence between people who had been deported and their families. This brings me to what I feel this memorial does best. Without losing sight of the enormity of the holocaust, and without trivializing the lives of its victims, the memorial personalizes the victims, bringing their day to day existence into focus. 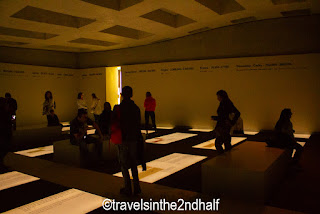 The exchange of letters shows their thoughts, hopes and fears. The next gallery contains displays dedicated to thirty-two families of Jews. It explores their lives before the rise of Nazism, describes what happened during the holocaust, and contains information about those family members who survived. Some holocaust memorials go out of their way to show that Jews were just like everyone else, or at the same time, that their circumstance were unique. The Memorial to the Murdered Jews of Europe does none of that. It just presents the stories, and lets the observers come to their own conclusions. 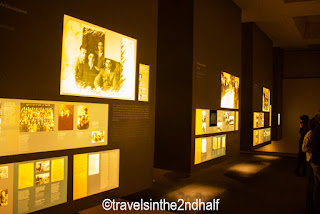 Many guide books and travel sites steer people away from the Memorial, but I disagree. I found it to be moving and informative. Like all of the memorials that I visited on this trip, there is self-reflection on Germany’s history. There is no attempt to hide or deny this part of their past. The United States can learn a lot about how to deal with our history of slavery, the genocide of Native Americans, and racism by studying how Germany has dealt with their Nazi era.